I took Stephan to town with me when I went to Te Wānanga this morning, to pick up Mathew's car, which he'd kindly agreed to lend us because the ute's horrible gear-box whine is getting worse and we think we'd better stop driving it further than town until we decide what to do about it. We don't want to drive it as far as Kate and Geoff's, more than two hours away, for example. 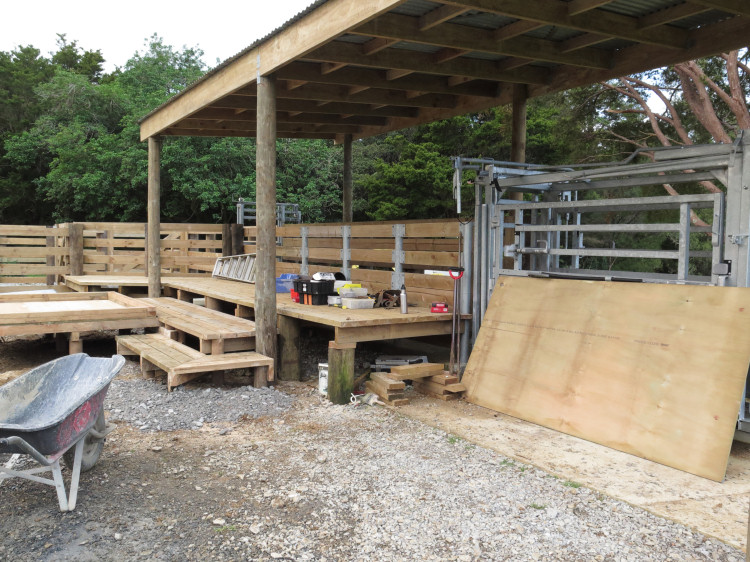 While I debated in te reo whether or not people should vote, Stephan was working hard at home. By the end of the day the little shed had a floor and there's another step down from the cat-walk. Marvellous. 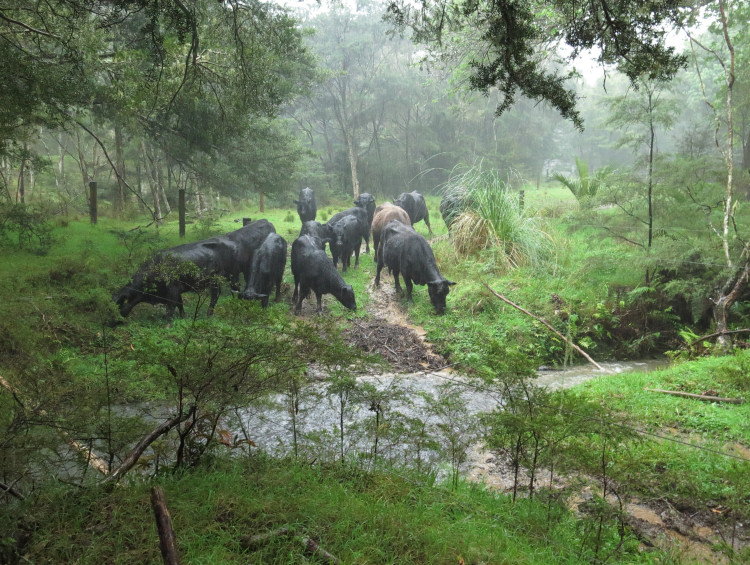 I was home from Te Wānanga early enough this afternoon to get out around the cattle.

Here are the pregnant R4 heifers and the bulls coming out of the Swamp East Left to cross the stream.

Crossings like this need more metal to reduce the amount of soil the cattle track down to the stream, although quite a bit of the loose material here has been left by floods. 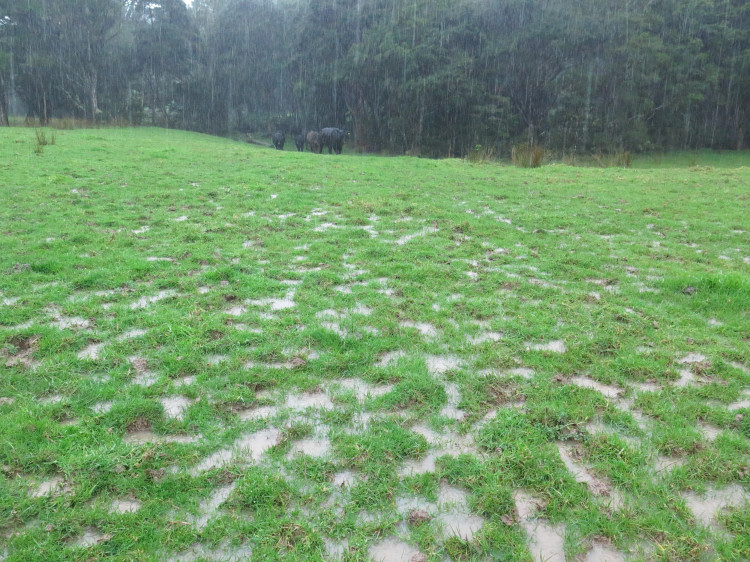 It wasn't the best time to walk them across the Frog paddock which is now looking sodden. I suspect we haven't done quite enough drain-making to address all the water that comes down from the PW hillside.

While much of this is recently fallen rain, the hoof holes indicate that the soil moisture here is generally too high and that might be improved by further drainage along the top edge of the paddock. 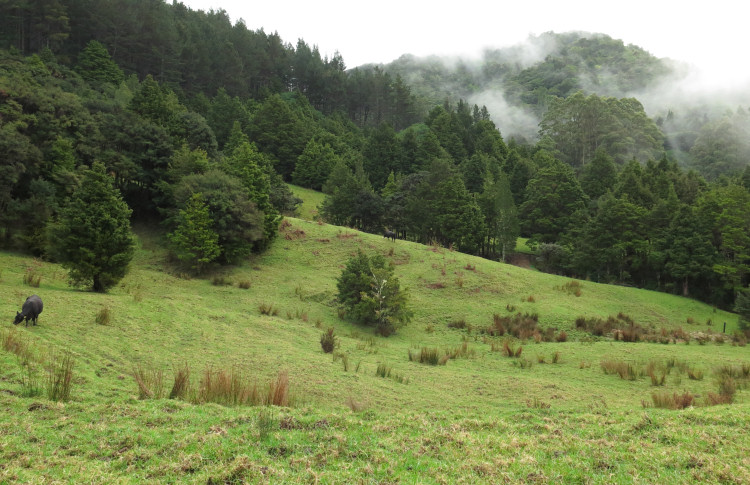 By the time I got out to the Spring to check the cow mob, the rain had stopped.

We went to town to the doctor. Five weeks ago Stephan got poked in the eye when he was cutting a pole to unblock the Big Back South culvert pipe and I can't remember if I had a close look then or not but at the time some lubricating drops relieved the pain he felt and it seemed to have healed itself. In the last few days though, he's been suffering the same pain again and with some magnifying glasses to look deeply into his eye, I saw a black speck beside his iris. The doctor, after applying some anaesthetic eye drops, extracted a splinter of a magnitude one would feel in one's foot! He'll be fine again after a few days' application of prophylactic antibiotic drops. 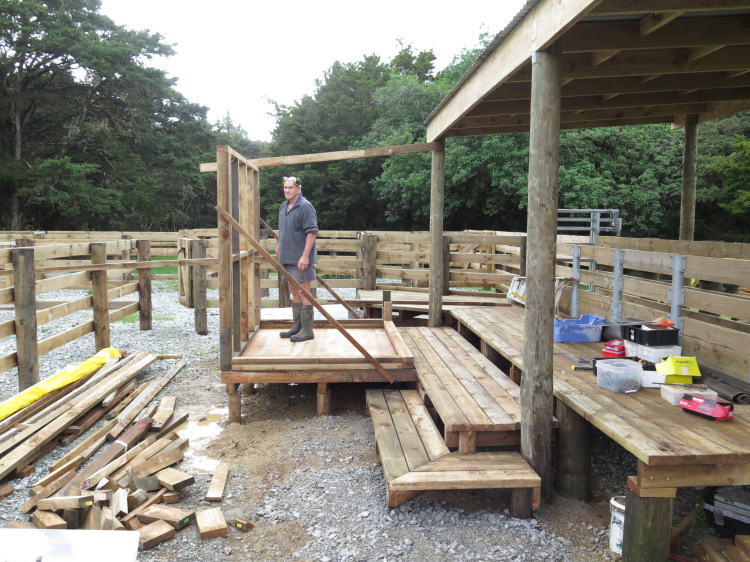 Back to work again. No time off allowed on this work contract.

I stepped outside this evening between some very heavy squalls with lightning and thunder, to listen for any noise out on the flats from the cattle and heard an orchestra of Ruru (Moreporks, the little native owl).

I watched the approach of another storm front on the rain radar, turned the computer off as I heard the thunder getting nearer, then watched lightning flashes and counted until the thunder shook the house and hoped it wasn't going to be too frightening for the cattle. Fortunately the storm passed a little to the north, so we had no claps of thunder directly over us.

I have felt anxious about thunder storms since the huge one in 2017 when there was an enormous and unheralded clap of thunder directly over the farm, frightening some of the cattle into an unseen stampede that broke fences as several of them ran through them and were found the next morning in the wrong mobs, wrong paddocks. I see I noted that Eva appeared to have been slightly injured in that event; did that contribute to the cause of her later early demise? We had several calving problems that season, more than I'd ever experienced before and I wondered too, if their stress response to that event had contributed to those later issues. 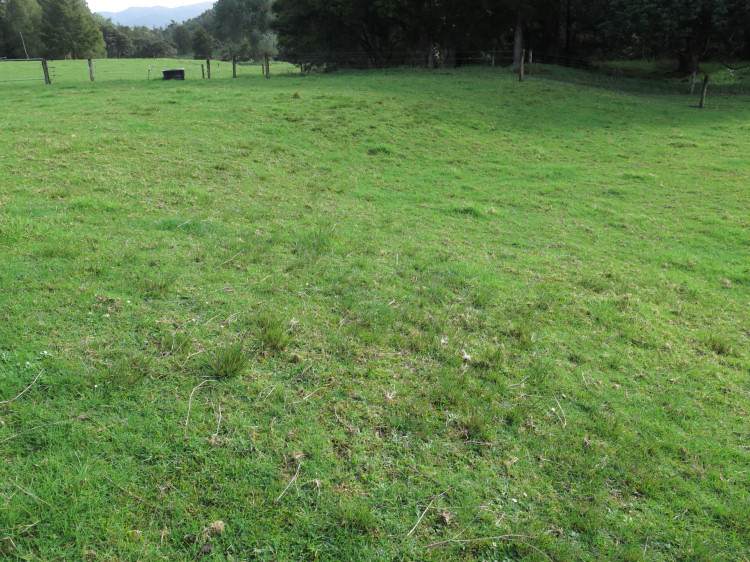 In the foreground you may be able to distinguish some clumps of grass of a slightly different appearance than the rest; it is rat-tail (Sporobolus africanus) and it's spreading alarmingly quickly. It is difficult to kill but we'd better start making a concerted effort or it will be everywhere, as I see on some other properties around the area.

We set off for Whāngārei early this afternoon, after organising various things, including ensuring that the young hens were definitely eating from the automatic feeder and were well settled in with the mature birds since we moved them on Monday night. The cattle should all have enough to eat while we're not here for a couple of days.

We had decided to go and look for a new ute. It is disappointing that our current new ute has only lasted for 21 years before sounding as though it will fall to pieces at any moment but nothing's made like it used to be.

There's one major dealer in Whāngārei, so we went directly there, found a sales representative and told him what we wanted: a flat deck, a "cab plus" (not a double-cab like a car but about half that space behind the seats, enough for bags, shopping or a carefully-folded person to travel short distances), vinyl flooring and two-wheel drive. He said he could do three out of four on that list and it was parked beside us in the show-room. We sat in it, went and talked about how much it would cost, then took it for a careful drive. It's a ute; it wasn't awful, that was really about all we needed to know, so we signed the papers, arranged for various additions like a deck liner - the one criterion he'd not met on our list was the flat deck - and cover, seat covers, since it took us ten years to discover that ute seats are not covered with practical, hard-wearing fabrics and a paint-protective coating with a lifetime guarantee. We told the guy we'd certainly be testing that. Oh and a tow-bar.

We left there just after five and went up to Helena Bay to join Kate and Geoff for dinner and the first night of our 'holiday'. 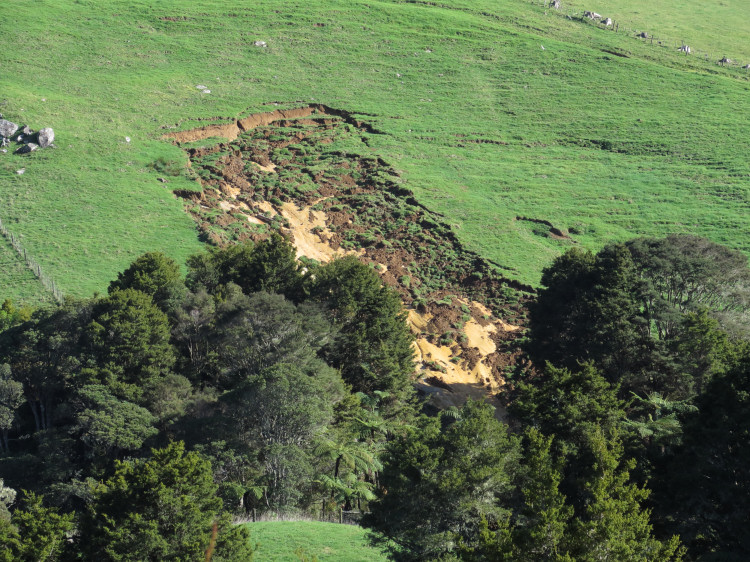 The huge slip down Kate and Geoff's hillside has created enormous danger for their does and expected kids, in one of the two paddocks they use for kidding.

The topsoil is deep but had slid like a viscous liquid down the hillside in the big storm a few weeks ago. There is water running between the soil and the slippery clay beneath it, presumably from springs in the hillside as we have in our area but the heavy rain during the storm must have tipped the balance too far. 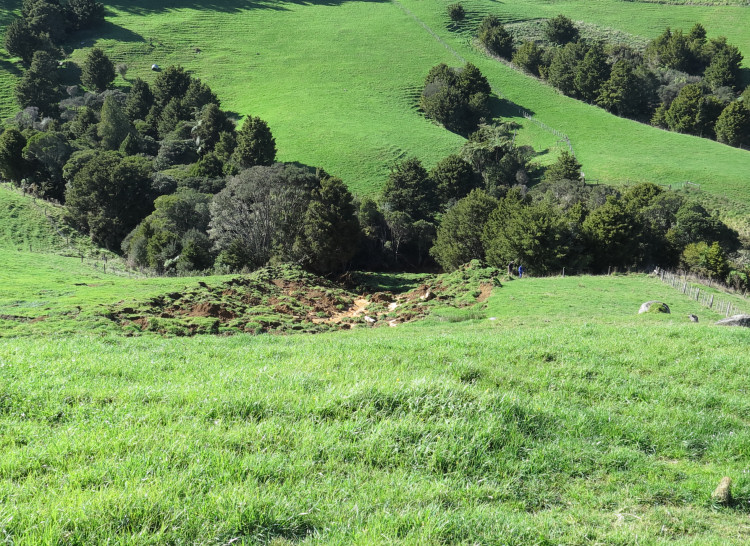 Geoff and Stephan got to work preparing to fence around it early this morning. The two of them are down on the right of the slip in this picture, Geoff in blue overalls.

It's a busperson's holiday for Stephan but fencing is something he really enjoys doing and it's fun doing it with and helping someone else.

Kate and I collected cuttings from Poplar and Willow trees and pushed them in at intervals along both sides of the slipped area, in the hope of stabilising it when they grow. 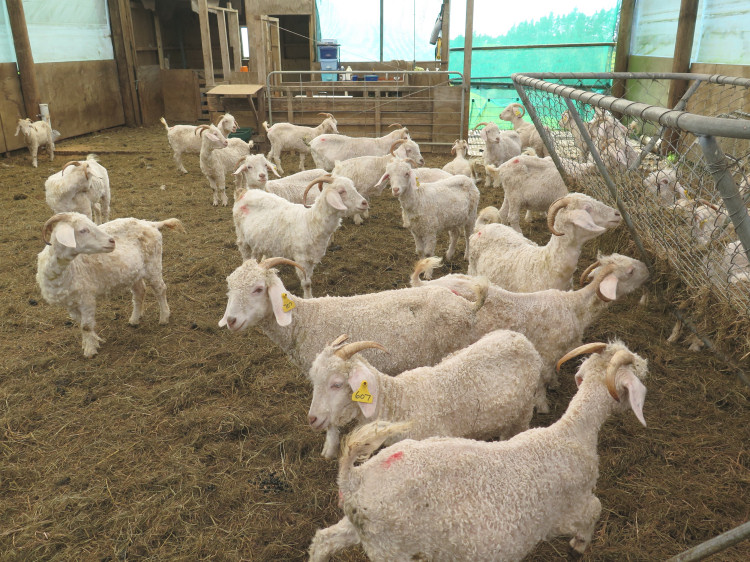 The Angora does are all heavily pregnant, due to begin kidding within the next two weeks. 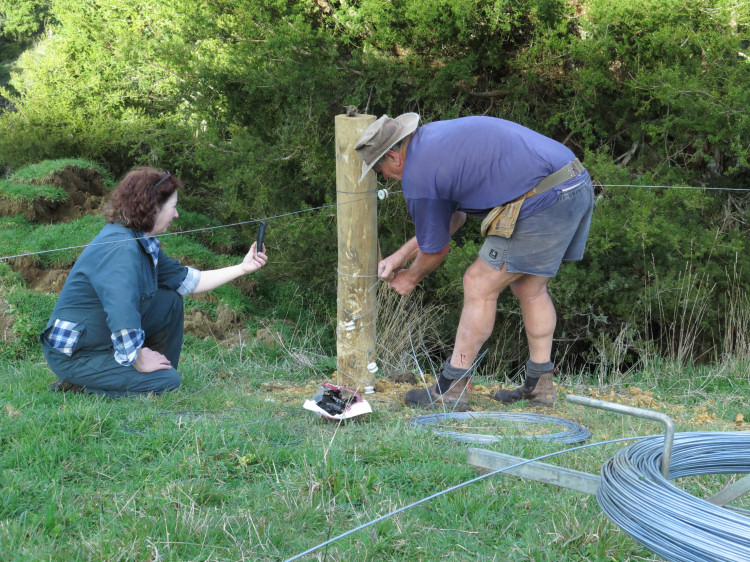 Kate recorded Stephan attaching some insulators to an angle post for the new fence.

Kate owns and runs Lifestyleblock.co.nz which provides a huge amount of useful information for farmers, big and small, including great information on how to tie fencing knots. 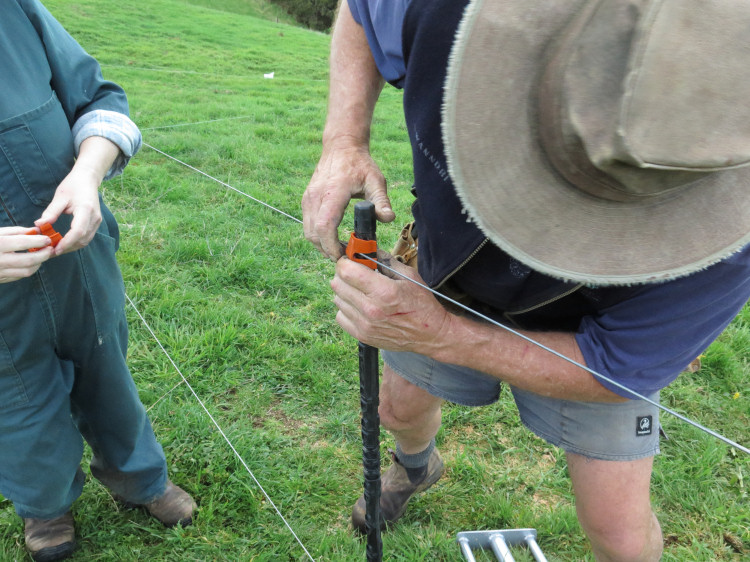 Then, having set up the guide wires, Stephan tried installing a couple of the new plastic 'waratahs' Kate and Geoff recently purchased, a semi-permanent method of holding the wires between the key posts Geoff and Stephan had installed. The hillside will quite likely move again so the fence may have to be shifted and these new things go in, and can be removed, reasonably easily. 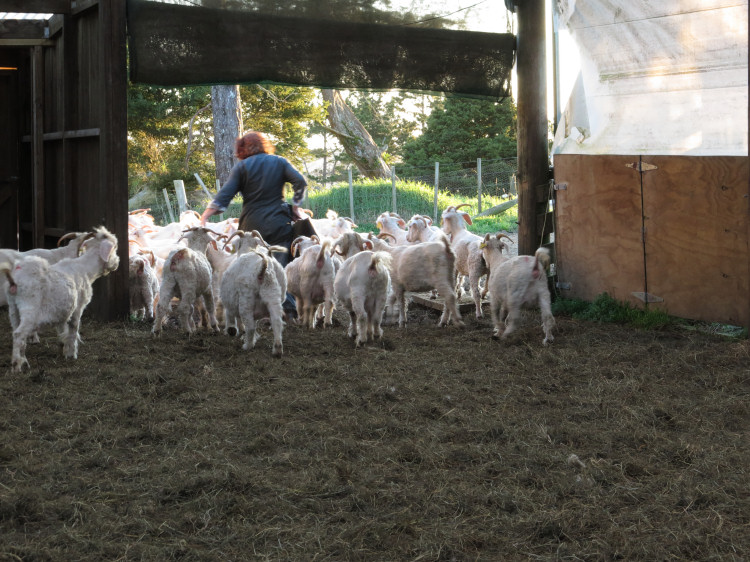 Kate loves her goats and her goats love her; especially when she's carrying a container of feed-nuts.