We left Helena Bay this morning and arrived home around noon. Travelling to and from anywhere south at present takes an extra 40 minutes because we have to go across to the East coast to State Highway 10 to travel south. The slip in the Mangamuka Gorge is not expected to be fixed for many weeks. It is tiresome that after nearly an hour's travel one has only gone as far as the start of the normal journey! 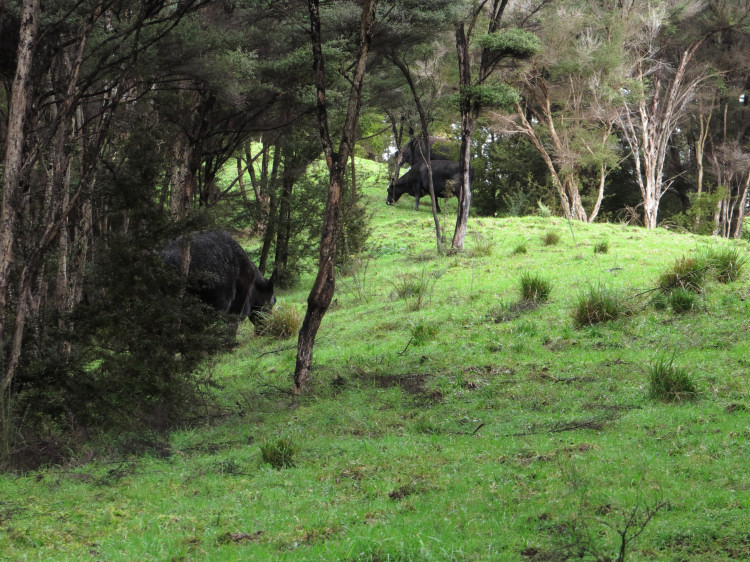 We went around checking everyone, here the cows grazing around on the PW hillside. I had to walk up and down and around a few times to see everyone. Stephan doesn't seem to be able to see the numbers of those with invisible tags. What's wrong with him? 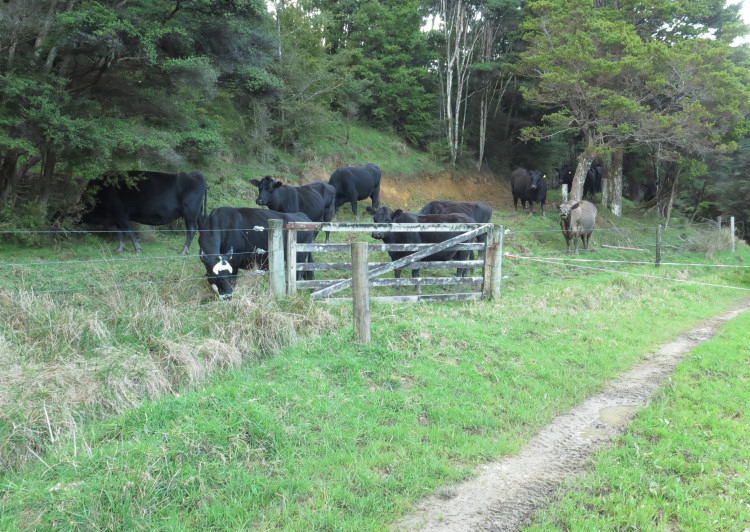 We moved the R4 heifers and the yearling bulls. I went ahead and set up the gates, attracting the attention of the cows who all thought something good was about to happen for them. 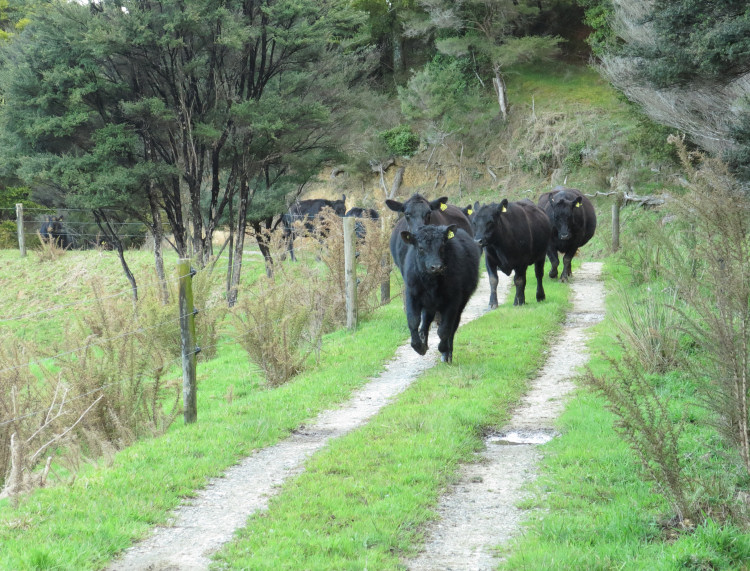 The bulls eventually came around the corner and ran along the track, having heard the cows here. They're excitable fellows. 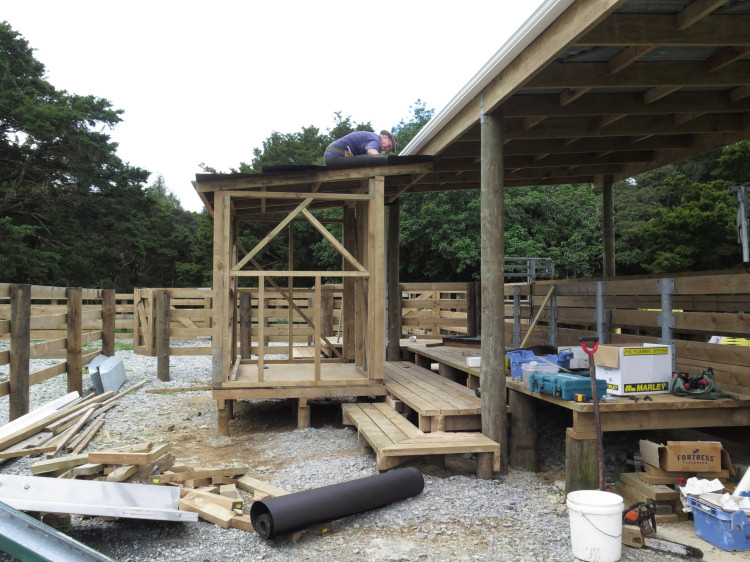 Stephan continued building the little shed today while I stayed in my office doing the accounts. It occurred to me that if I paid a lump sum for the ute today, I could immediately claim back the GST (Goods & Services Tax) portion tomorrow morning, which would certainly ease things financially over the next few weeks. Usually I'm very slack about the GST returns and don't do them until the last minute on the 28th of the month when they're actually due; but with a large credit due in this case, it might as well go in on the first day possible. 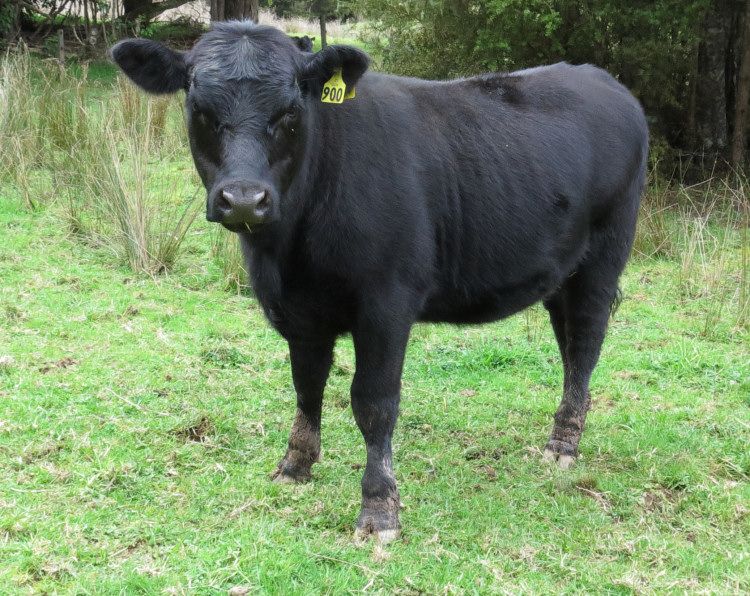 Looking at this heifer brings me enormous pleasure. I like everything about her so far and she has a lovely face for pictures. She could do with being a bit tamer but once she's spent the summer with the mating mob amongst which I'll regularly wander, that should change.

The grass is noticeably growing around the farm and at 6pm it was still quite light. It is at this time that everything begins to noticeably change quite quickly.

Tuesday the 1st of September

Several years ago, although not quite as early as it began, we joined KiwiSaver, a voluntary savings scheme set up by the government to help New Zealanders to save for their retirement. When I signed us up for it, there was an initial starting grant of $1,000 from the government and every year we put at least $1,040 into it, the government matched that sum. Most people who joined did so as employees so their contributions were higher but as self-employed people with less income, we opted for the minimum contribution, to get the greatest benefit from it. Later the initial grant was scrapped and the annual payment reduced by half but it's still a great idea.

I didn't think too much about what would happen later but now Stephan has passed the age at which one may withdraw one's retirement funds, the balance of his account is available to us. We took some out when paying for the yards material and it occurred to me that we could do the same again when paying for the ute. This time round was even easier than the last time, the bank having already recorded the necessary identification documents. I applied for it late on Thursday and today it appeared in our ordinary bank account.

It is easy to argue for using Stephan's retirement fund for part of the ute payment since it will allow him to go to Grey Power meetings when he gets old.

I was feeling a bit stressed about finding the necessary funds but that money came through quickly and the ute will be delayed anyway because various bits we've asked to have added are not currently available. Covid delays, I presume.

We've seen the first Pukeko chicks around for the season and I've heard Spur-winged Plover chicks out on the flats. 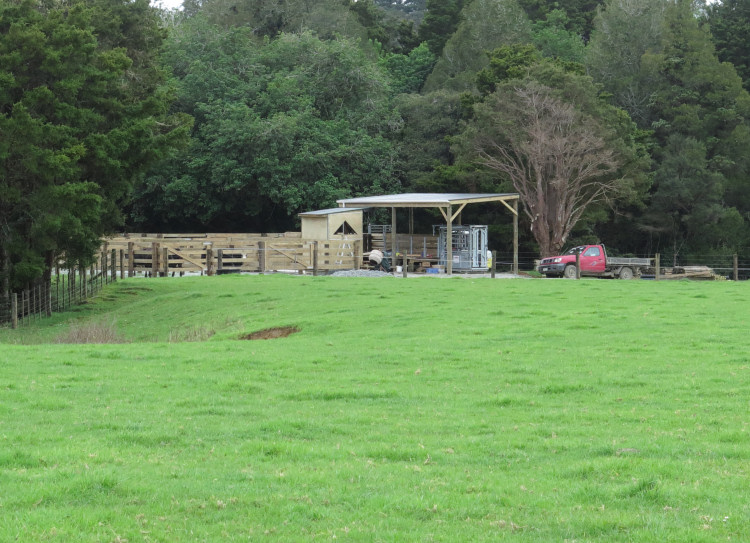 A picture from across the Windmill of the lovely yards, with some lovely heifers waiting there while we took their friends away. I decided it is time to add the yearling heifers to the non-pregnant mob so I can prioritise the feeding of the pregnant cattle. The non-pregnant group won't be run short but I will send them across the road, out of the way for a while, and prioritise the grass on this side for the others. 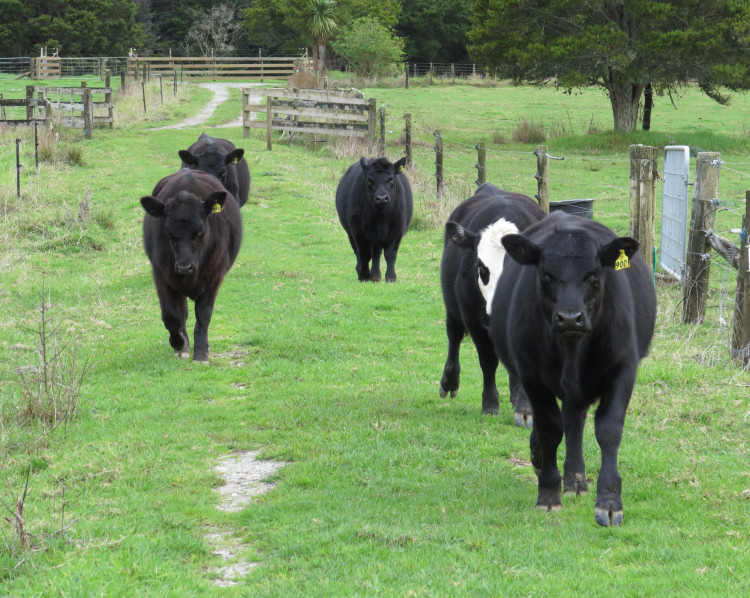 When we came back from taking the other heifers to the Bush Flat, we took the yearling heifers along to Flat 4. 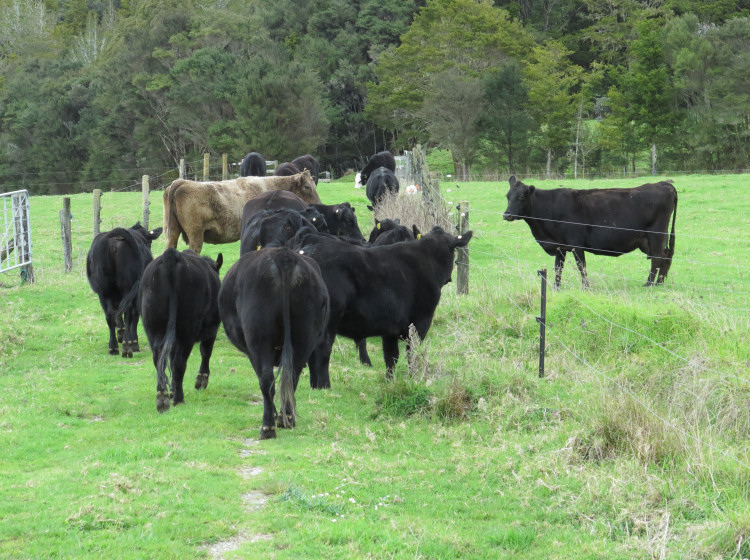 By the time I'd brought the other nine to join them, the five youngsters had drifted back into the lane again but small heifers generally run away from larger cattle who challenge them, so they were unlikely to stay there for the inevitable challenges.

Zella, on the right, came across to see them on their way past. 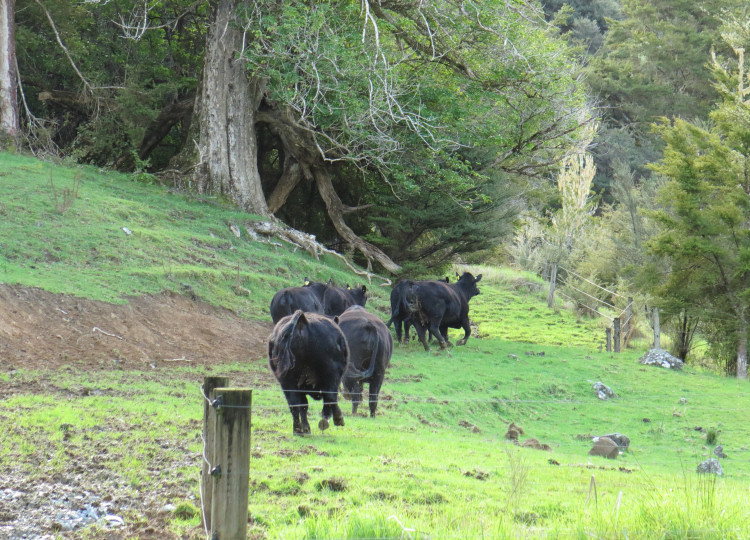 The weather was horrid, so I stayed indoors most of the day, writing.

Later I went out and combined the eight pregnant heifers I'd sent to the Bush Flat yesterday with the other heifers and thin cows who'd been next to them in the lane and the Small Hill. They went into the Big Back South; here some of the heifers beginning their run up the track to catch up with the others. 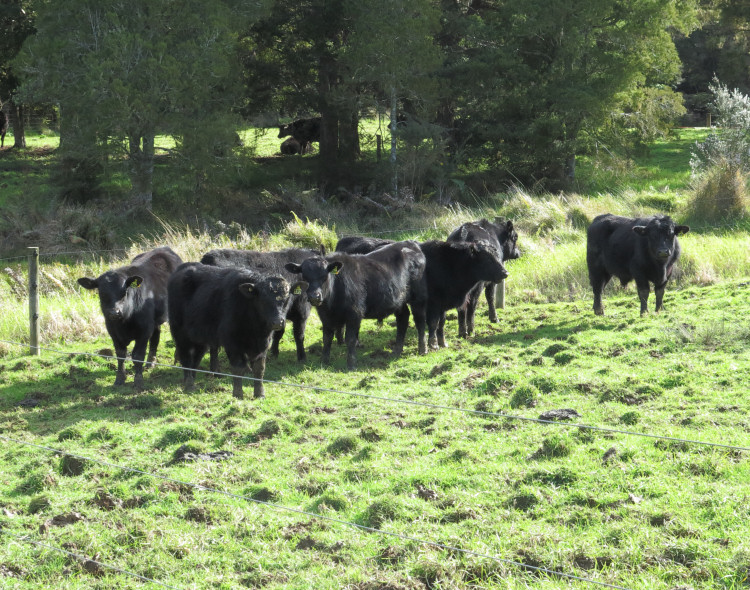 I separated the little bulls from the pregnant R4 heifers the other day, in anticipation of combining the heifers. They've been exploring the Big Back North paddock but probably came down here to be near the heifers on the other side of the swamp. 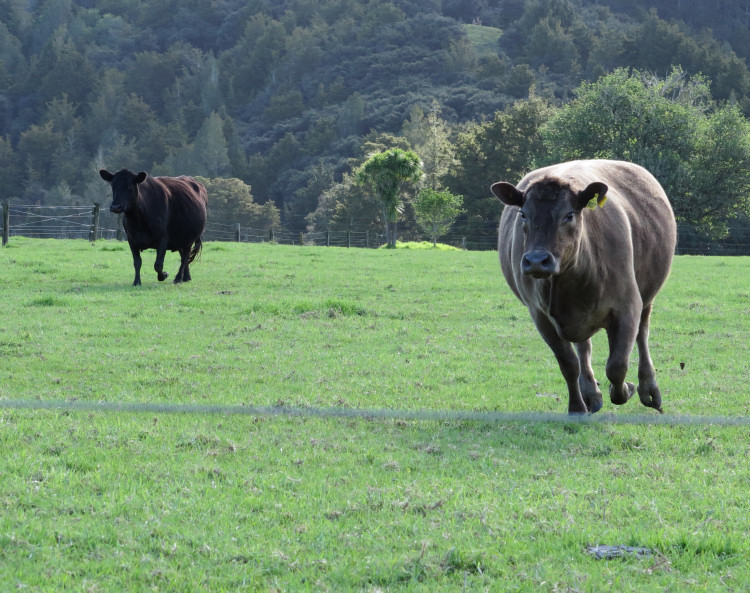 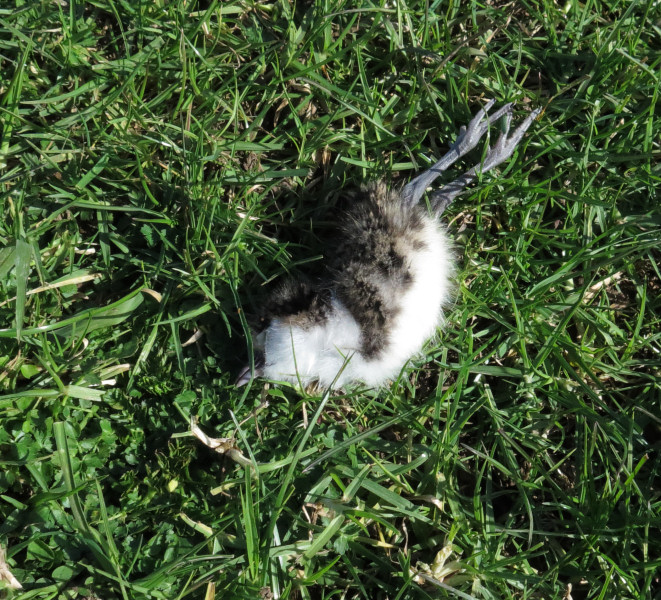 Across the lane I noticed something white on the grass and on closer inspection found it was this poor dead Plover chick. I think they have a pretty hard time out here in the open in cold weather, their parents being alarmists, prone to leaving them alone whenever they see me coming.

Whenever I find them out on the flats I think they're very small to be alive in such cold weather but most of them survive. 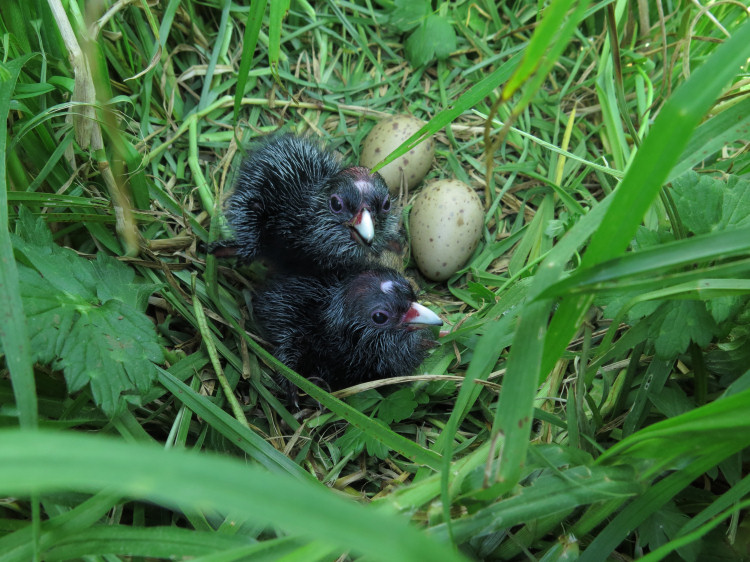 Across the stream in the orchard I found a Pukeko nest, with these two, newly hatched.

When I spoke to them they came clambering toward me, so I picked one up for a stroke. My father always told me you shouldn't touch baby birds because their parents will then abandon them. While I believe that to be likely for some species, for most of these ground nesting birds, it does not appear to be so. I gently returned the chick to the nest and moved swiftly away so it would not try to follow me. 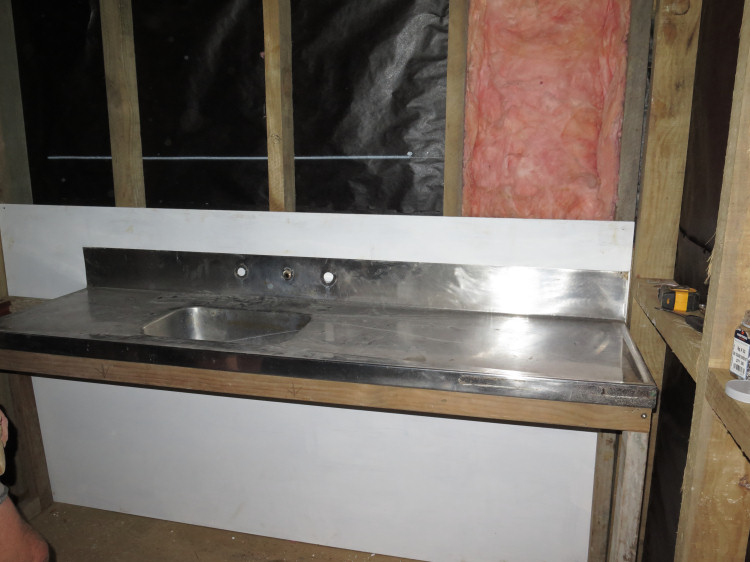 Stephan is now working on the inside of the little yards shed.

It will be fully lined and insulated (with the pink fibreglass material as shown) so that it remains cool during the summer. There will also be an insulated box in one corner to hold the semen bank when I have it here. That will have polystyrene lining as well and will be in the south-east corner of the shed, protected from as much direct sunshine as possible.