The week beginning the 3rd of October 2020.
Saturday the 3rd 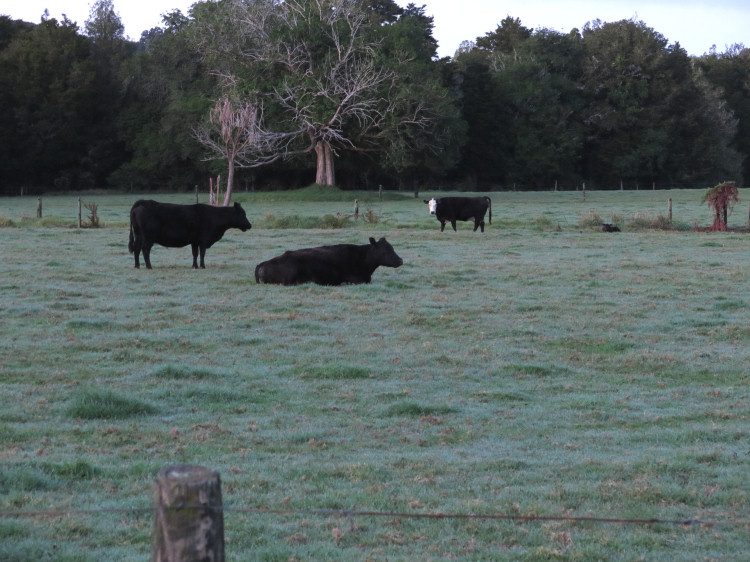 My first check at 6.45 this morning. It's reassuring to see the calf, not have to go searching for him because he's fallen into the drain. 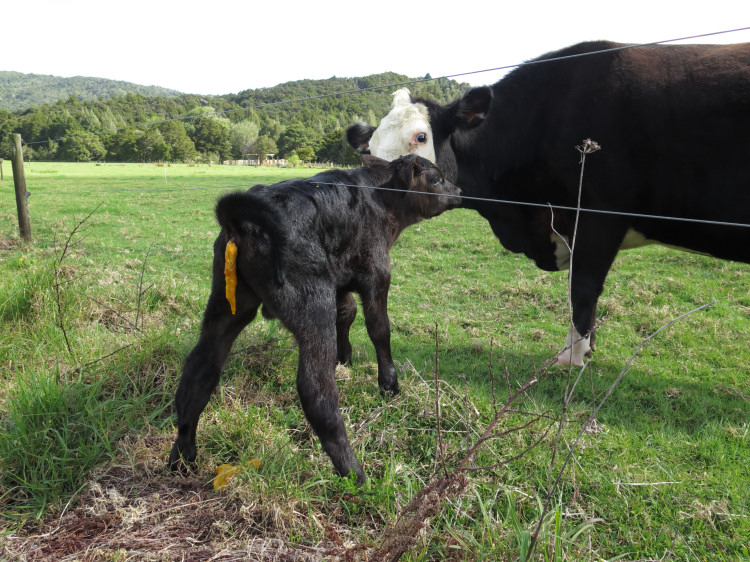 Later on when I couldn't see him, I went to check where he was and that he had actually fed, since I hadn't confirmed he'd done so yesterday. This is the best confirmation possible: milky poo! 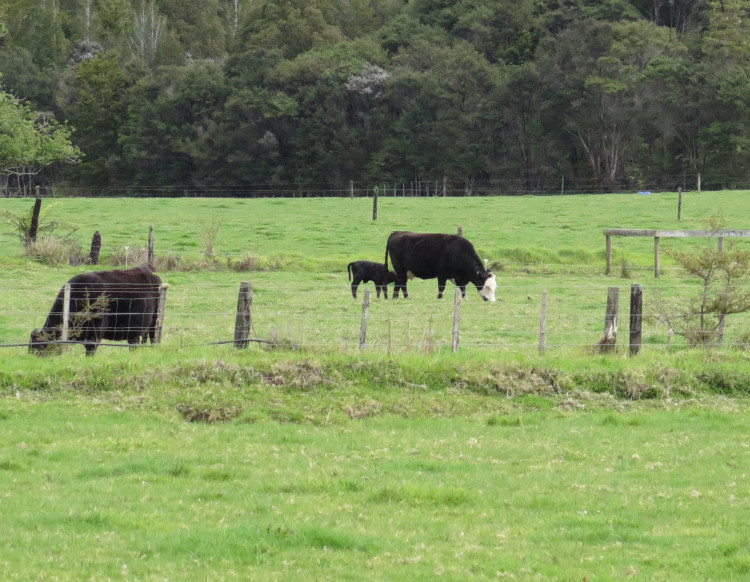 I wonder if there's something in particular about 746's udder that makes feeding from behind so comfortable for her calves. I'm remembering last year's calf, who only ever fed from the back. 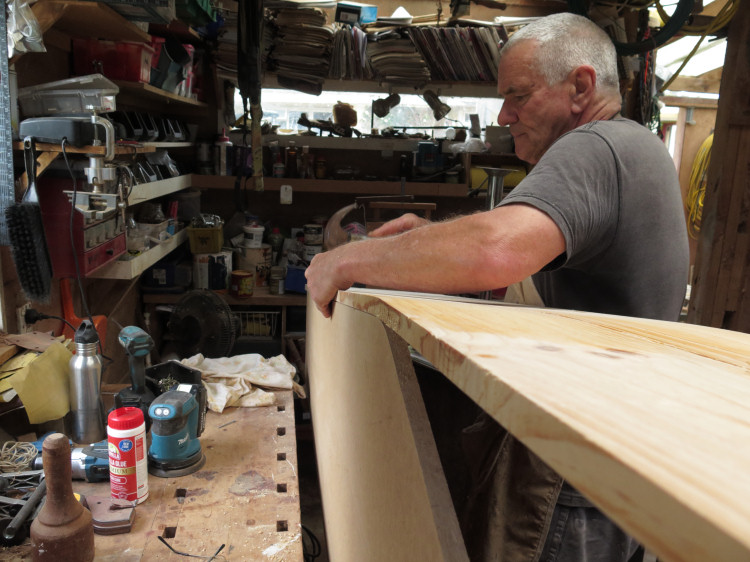 I answered a phone call from Kees last night, just after his sister had died, asking for some advice about funerals and how to do things as cheaply as possible for a family who had little to spare. Stephan and I conversed afterwards and he decided he'd like to offer to make a coffin if that would help, so called Kees again for a second conversation and so today, that is Stephan's job, with occasional assistance from me.

Here he was attaching a side, kerfed (parallel cuts made to the inside of the intended curve) and ready to gently bend to the curve of the base. 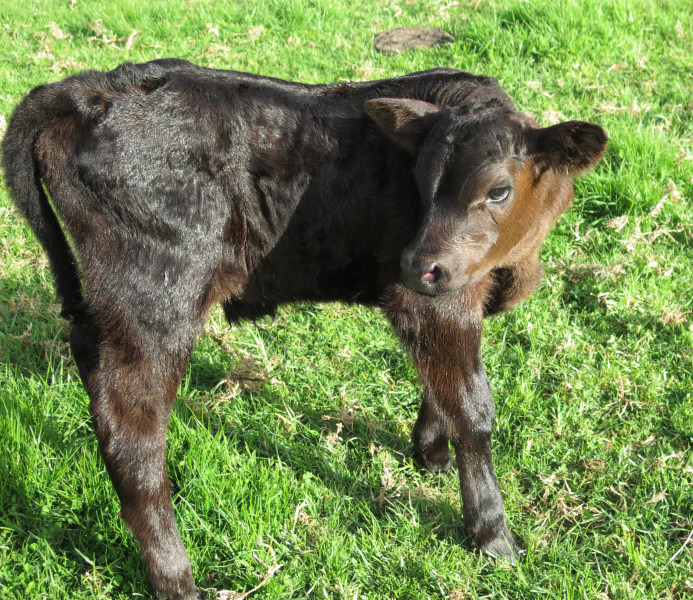 A gratuitous calf picture. 746's calf's sire is Harry - you can see all the prospective sires and expected calving dates on the Calving 2020 page. 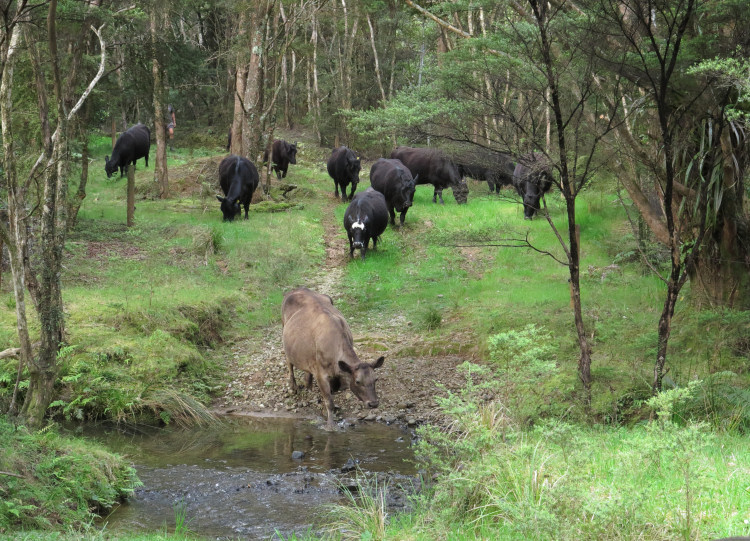 In the early evening Stephan came and helped me shift the cows, since I'm still not exerting myself while I recover from whatever bug I'm suffering from.

Here come the eleven cows, from the Swamp East Right and we took them out to the Swamp. 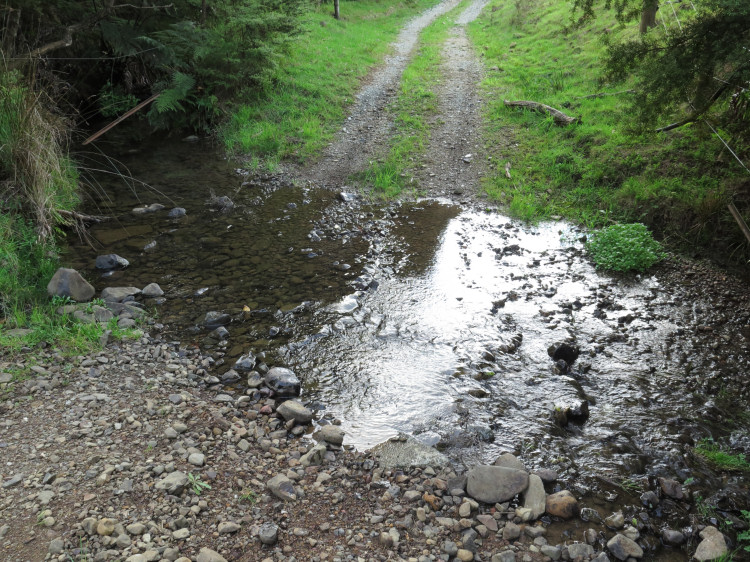 The stream, for this time of year, is quite low. September's total rainfall was 97mm, only two-thirds of the long-term average. 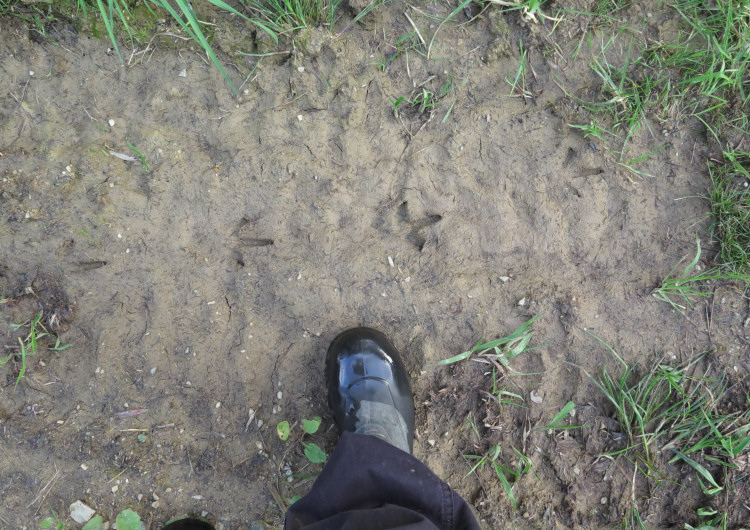 These certainly aren't Pheasant footprints! I sometimes wonder if the prints I think are Kiwi are actually Pheasant but these ones are the prints of a heavier, faster-moving bird. I have been wondering why we never see any larger prints, because according to a reference I often find on-line, an adult's print will be 90mm or more and these are smaller. Perhaps only juveniles come exploring the farm? 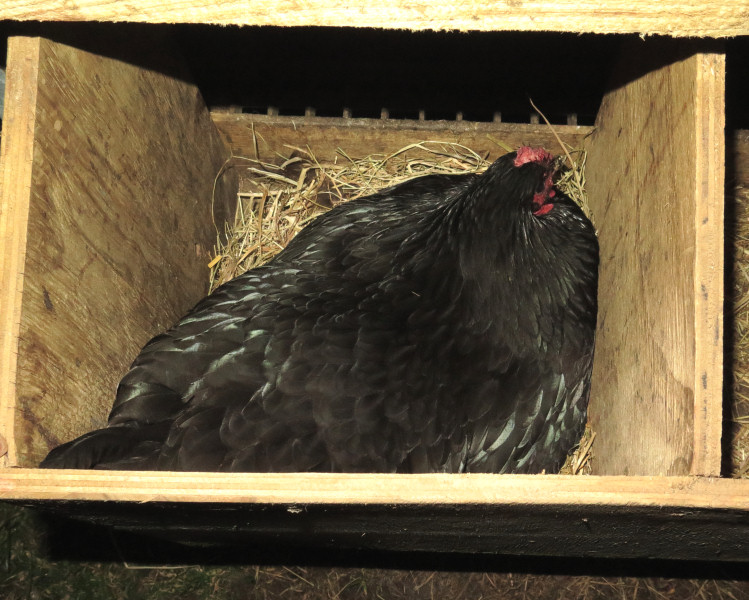 This is one of the young hens, sitting! We don't want hens who sit, that means they're not laying.

At 7.45, just before dark, grey 812 was walking stiffly around, irritatedly swishing her tail. At 9.15 she was lying down, standing up, lying down again. At 11.35 a big dark bag of fluid appeared and burst and then the bag containing clear fluid and two feet was visible, also bursting when she stood up. At 11.59pm the calf was born, with a lot less fuss than the first time she calved, last year.

12.30am, back out in the paddock to check on 812 and she was being harassed by both 813 and 856 who wouldn't get away from the calf and 812 was increasingly upset with their interference. I opened the tape to encourage the two nosey cows away and shut them out of the way, leaving 812 to quietly settle with her calf. 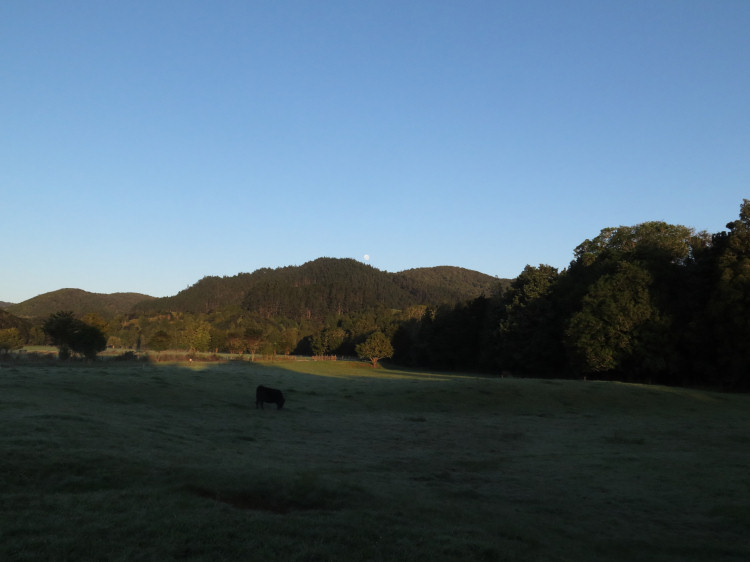 While out doing my first morning check, I received a text with NEGATIVE (in capitals) as the result from my Covid-19 test on Thursday. It had been sent yesterday at 9.30am. We live on the unfortunate side of the digital divide. 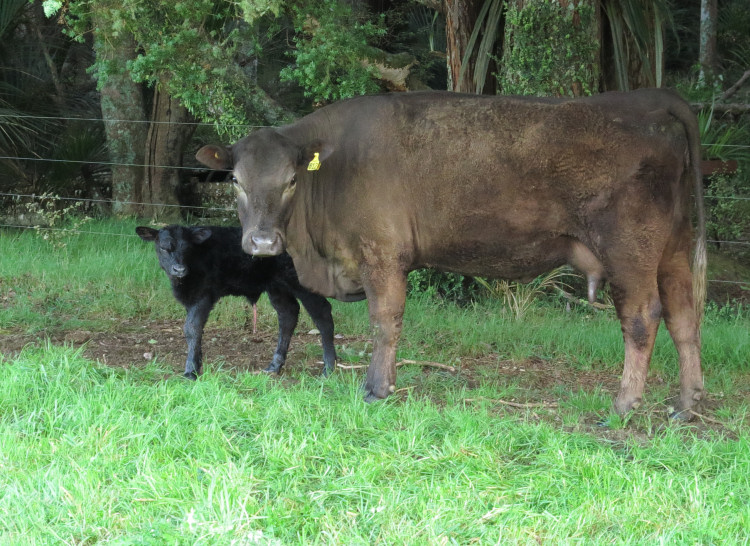 812 was settled with her daughter, happily still separated from the others until an hour or so later, when the calf presumably went for a little explorative run under the electric tape and everything went mad again, with the other two becoming far too intently interested in the calf for 812's comfort and she ran through the tape and they were all bellowing at the poor confused calf. 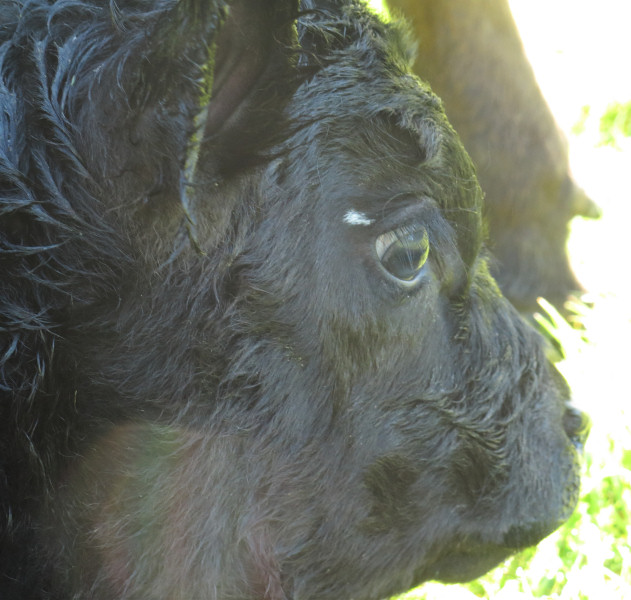 After reinstating the electric tape between the two pairs again, 812 began grazing quietly in the sunshine while her daughter settled down to snooze.

Here is another Harry-sired calf with a tiny white spot beside her eye. 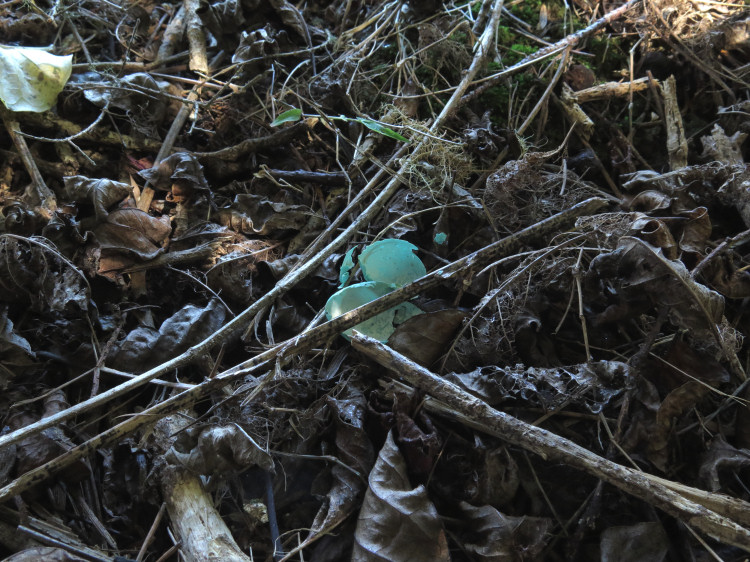 While checking the calf I noticed this egg-shell remnant just through the reserve fence... 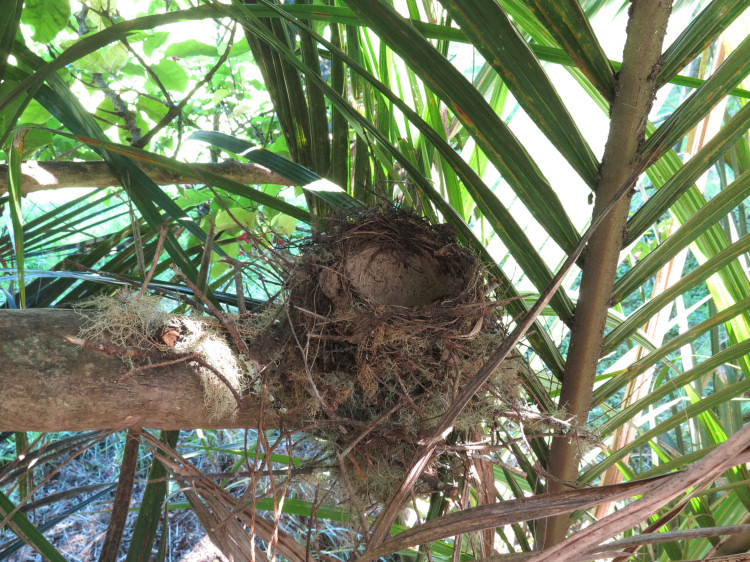 ... and above it the Thrush nest from which it presumably fell. 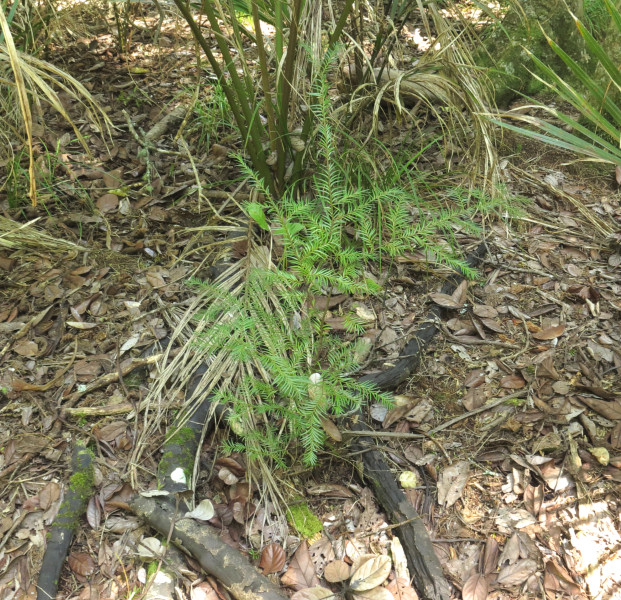 While I was there I looked for the little Miro sapling I've been looking after for several years (I put a triangle of branches around it to signal its presence when it was very small, to stop anyone walking on it). It has grown a great deal since I last looked at it. 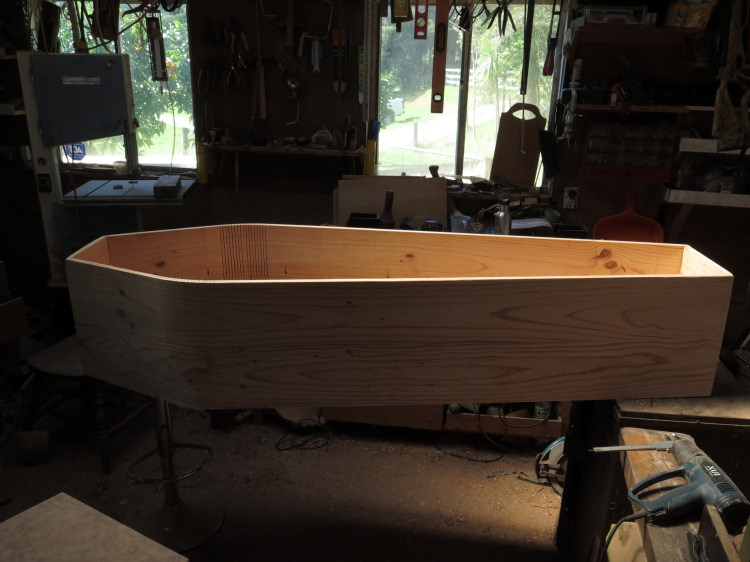 The coffin, only awaiting a lid. (And an occupant, but that's not part of my story.)

Later in the morning Kees and Lynn came to check on progress and bring some material with which to line it. The easiest thing to use was a fitted sheet, which didn't even need to be stapled in place, its elasticated edge holding it in place around the top. This coffin will not be used at an open-casket event, so nobody but the four of us was really going to look at whether or not it had been lined with fine material.

Elizabeth, Sarah, Maihi and Wana-i-Rangi came to visit in the afternoon. Maihi had some fun time in the pond while his little sister played nearby and Sarah and Stephan cleaned the deposits left by the Pukeko from the jetty and it felt like spring-time. 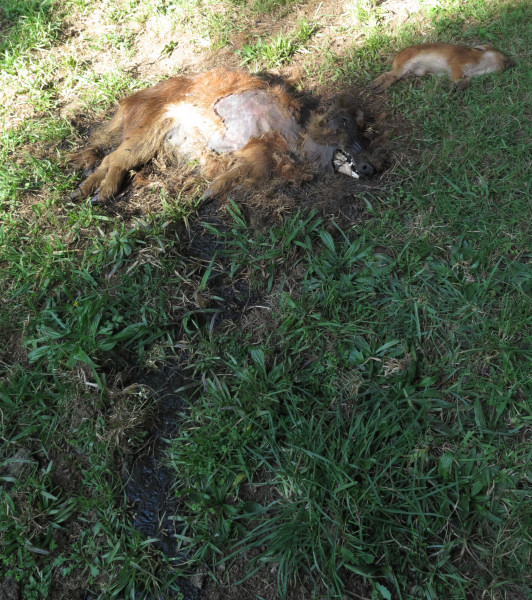 While the others walked up to the yards for an update on progress, I took Maihi with me to check on the cows.

As I moved to shut the gate from the Back Barn to the Spring crossing, I smelt the most awful dead stench. Maihi and I went to investigate, finding this sow in advanced decomposition, a rivulet of black, stinking fluid snaking from her body toward the bottom of the picture, and her more recently-dead son nearby.

The piglet must have been dead only a day or so, presumably succumbing to starvation after his mother died several days ago. It was hard to tell what she might have died of but last weekend I'd found a footprint from a poaching hunter in the Middle Back paddock and I wonder if his (they're always rude men who don't ask if they may hunt here) dogs injured this sow and she subsequently died of those injuries?

I laid the little piglet on his mother's body.

While the only kind of feral pig I want to see around here is a dead one, dying like this must have involved a great deal of suffering and whatever kind of creature you are, that should not be your lot. 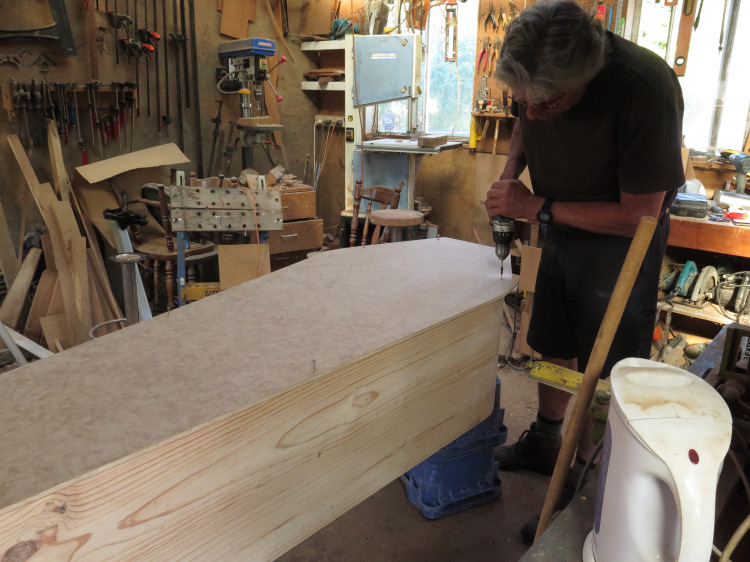 At home Kees had returned with his van to collect the coffin and, Stephan not being around, he'd commenced screwing the lid on, ready to take it away.

I am always perversely delighted by the ways we do some of these things. Some people would doubtless be horrified by Kees loading the coffin into the back of his work van on top of the tools and fuel can and so on. Perhaps it seems that we are disrespectful but my own feeling is that we are treating death as an ordinary part of every-day life, something we can deal with as ordinary people in an ordinary way and that includes a friend making a coffin and someone putting it in the back of an ordinary vehicle. Tomorrow the deceased sister will be collected from the funeral director's premises, whose provision of service has only been to collect the body from the hospital and keep it cold until the coffin was built, then the family will do their own thing in remembrance, before going down to Kerikeri to the crematorium. 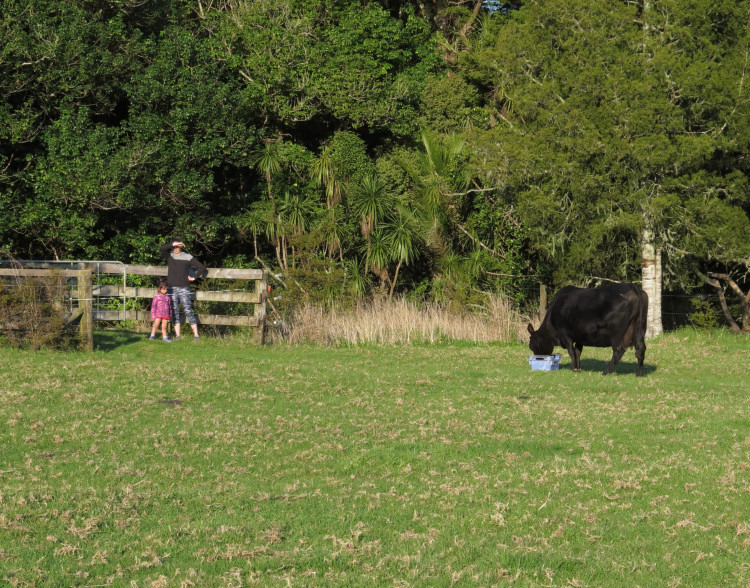 Sarah and Wana-i-Rangi came out with me to dish out the evening's Magnesium and molasses to the pregnant cows.

Stephan's cousin Christina came to join us all for dinner, so we had a lovely family time.

Early this morning as I wandered around before dawn, surrounding me were the calls of Tūī, all repeating the same phrase, a trill on the C above middle C, then a single chiming G above. Tūī often have a phrase they all repeat in the early spring, often entirely charming at the beginning but soon becoming quite maddening as you hear it over and over again, day after day. I've sometimes remembered to record them, since their favourite phrase changes from season to season.

There were also many Ruru calling, the little owl often called the Morepork and there were still some stars in the sky and the nearly full moon. It was a beautiful time to be about.

Later in the day I heard a Pipiwharauroa, the Shining Cuckoo, harbinger of Spring, although it could be said it's a rather late call this year. I think they arrive here a bit later than some other neighbourhoods in the area. 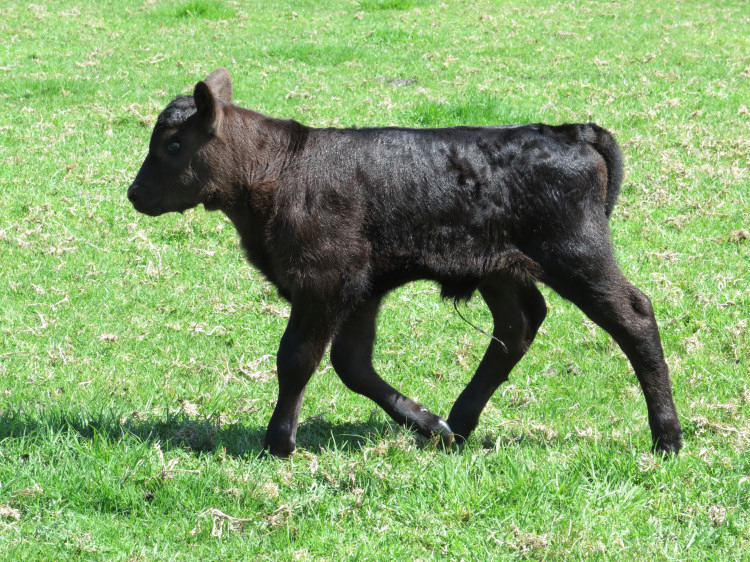 Here is 746's son. When Maihi and Sarah were watching the calves yesterday I realised there's often confusion about which are bulls and which are heifers when they're very young, because they all have an umbilical cord still visible. In a bull the umbilicus is just in front of the prepuce, so the area appears square at the bottom... 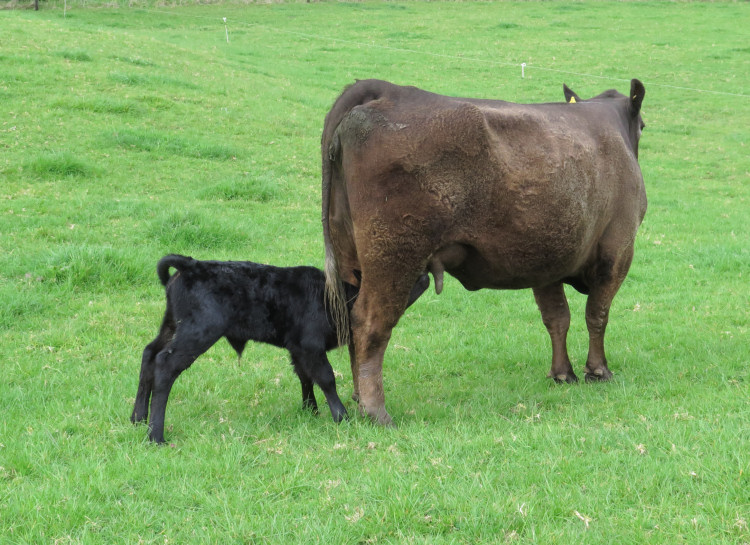 ... In a heifer, only the umbilicus comes out at that point and so the area is pointed. 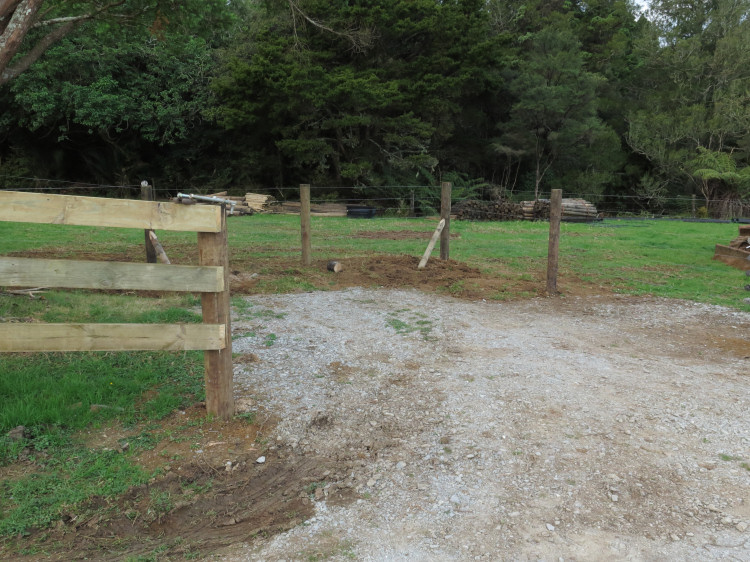 Stephan continued fencing the yards approach. The vet (or general vehicle) parking and turning area will need a bit more metal yet.

When I went to check on the cows in the Back Barn I looked down to the dead pig and wondered what had turned white on her body - I wondered if something had been chewing on the piglet and exposed his skin, perhaps, but when I got close enough to see through the trees, that didn't look to be the case so I went down to have a closer look. 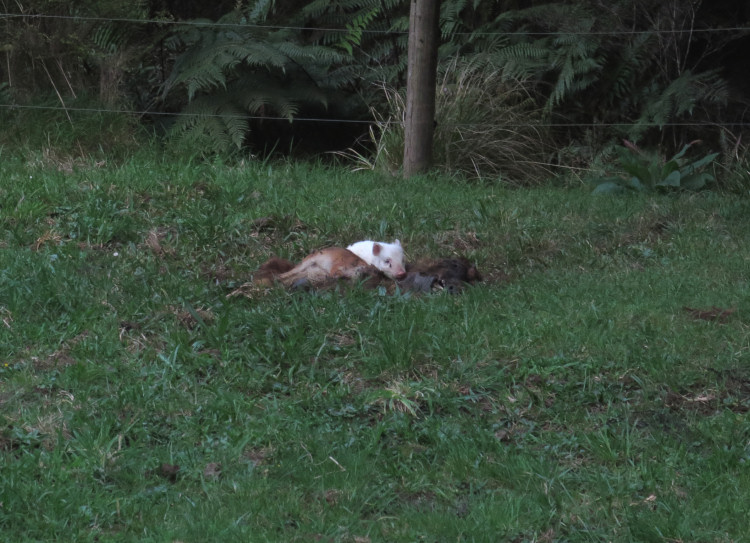 There was another piglet. A live little piglet. Although when he realised I was there and ran off toward the stream reserve, he didn't look like he'd be a live piglet for very much longer. He was very wobbly and quite thin around his rear. He must have been the biggest of the dead sow's piglets, with more bodily reserves than the other (or others, perhaps, which may have died elsewhere).

I followed him, since leaving him here to die would have been inhumane but he was still quite quick and disappeared amongst the trees and then over the edge of the streambank and a splash told me he'd fallen in.

I saw him at one point a little further downstream and then some moving foliage indicated where he was huddling against the bank and I quickly grabbed him before he tried to dash away again.

He was extremely smelly, having been lying on his decaying mother and his brother wouldn't be smelling very fragrant by now either.

I put him in my buggy, then found some hay twine to tie around his neck because he was trying quite hard to jump up and out of the foot-well.

At home I put him in the cage the hen and chickens had first used, with some nice fresh hay and fed him a very little warm milk and porridge. He'd been hungry for many days, so I didn't want to make him unwell by overwhelming him with unusual food.

When I next looked, he was burrowed deep in the hay, fast asleep.