The week beginning the 5th of September 2020.
Saturday the 5th 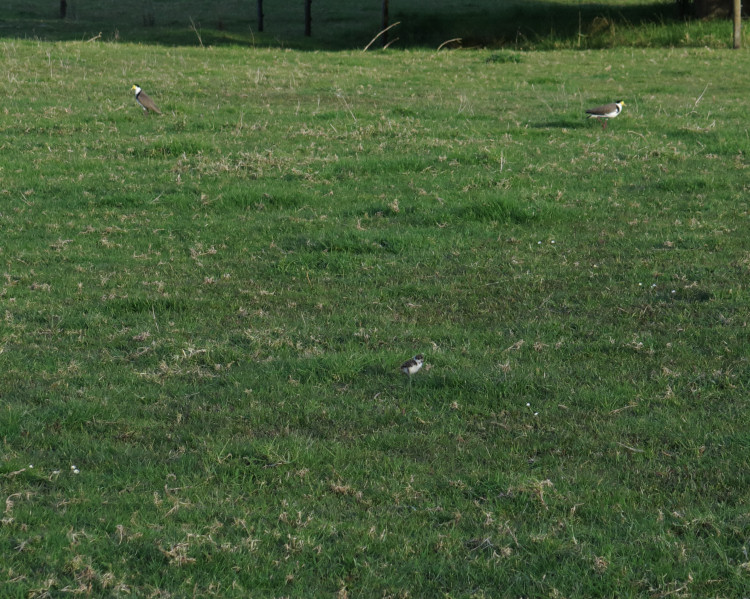 Here's the plover family in Flat 3, the chick presumably a sibling of the dead one I found last week. 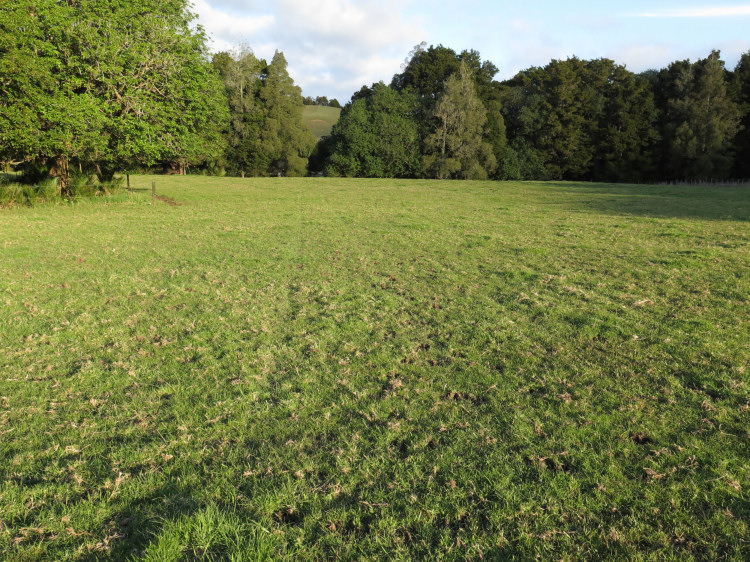 I drove across Flat 4 to go and check the cows who are currently grazing the Road Flat, across the stream.

That I was able to drive across the paddock without leaving more than a minor impression is testament to the continuing relative dryness of this season, despite August's rainfall total (266mm) being 147% of the long-term average and our second wettest August since 2010.

An email arrived this morning, containing the death notice of my Aunt Colleen's lovely husband Harold Temple White. I'd set up an email alert within the NZ newspaper publishing system to tell me when anyone associated with "Colleen" died because I had no idea where my aunt had gone, nor whether she still lived. I have not seen nor heard of her since I visited them in Foxton Beach (you'll recognise that oft-used name in this website, associated with a small black-and-white, short-tailed cat) in about 1998 and came home with a kitten. I am of an oddly-behaved family who sometimes choose to be out of touch with each other but I don't know why Colleen didn't stay in contact with me; my letters were returned, marked "gone, no address". I will write to the email listed in the notice. 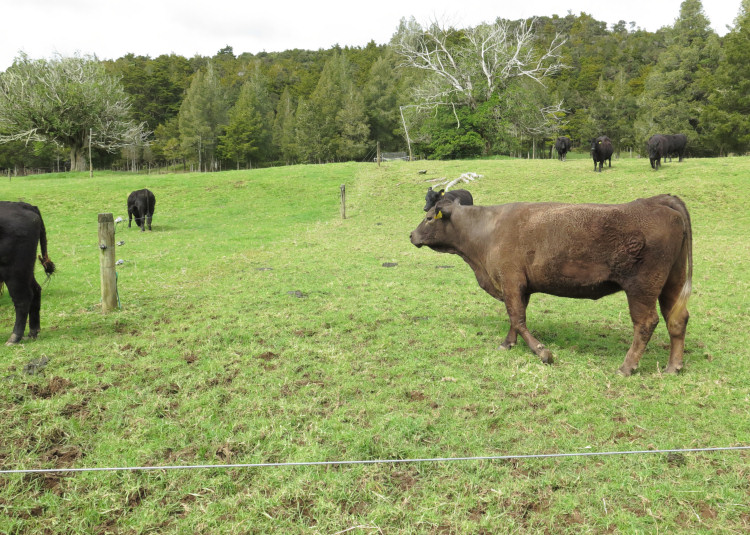 Still holding the cattle back, hoping I'm getting the balance right and they'll not end up losing condition. We need some more sustained warm weather to get the grass growing again after this recent cold spell.

They've done better this year than in any other winter I can remember, although what the changes in our climate might mean for the summer, I dread to think. 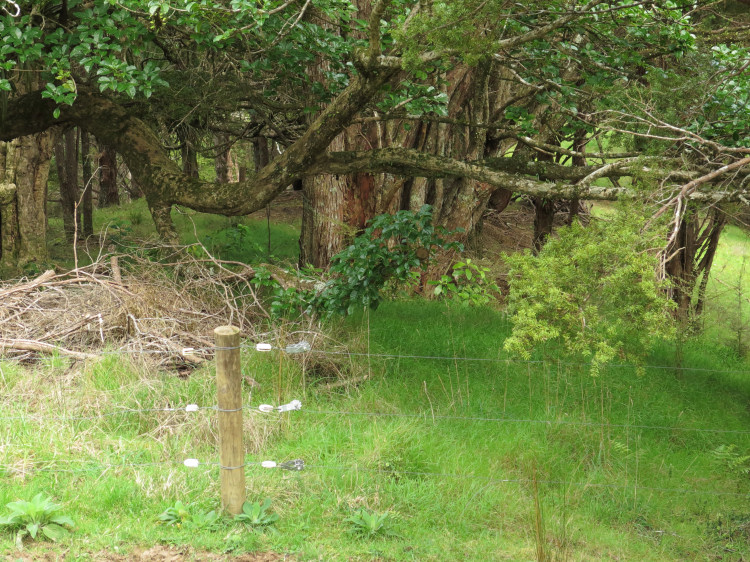 Having not seen the bulls for a couple of days, I walked up the Big Back North hill, around the top and back down the far side.

This is highest of the reserve areas on the south-facing hillside, around several large Puriri. The lush green foliage is now growing on that low branch where, formerly, it would have been eaten by the cattle. In time we'll see other plants growing in the protected area. 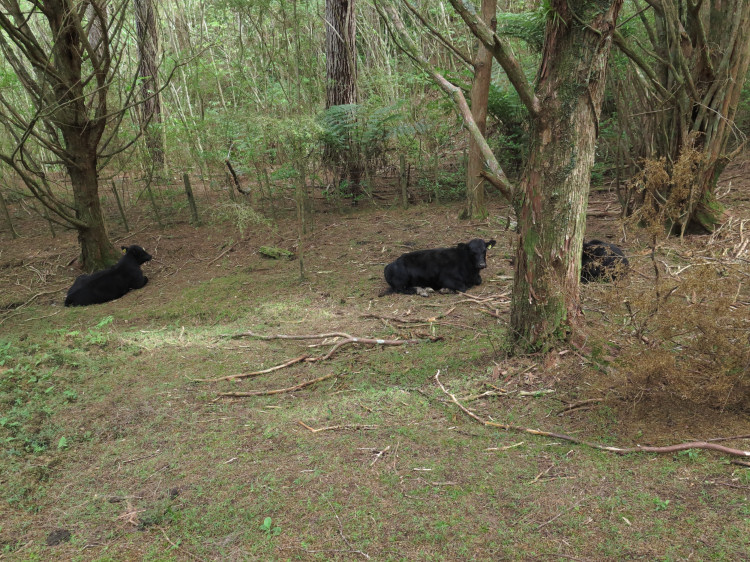 I found no sign of the bulls until I walked down the hillside at the far end of the paddock where three of them were sitting quietly under the trees near the boundary fence. 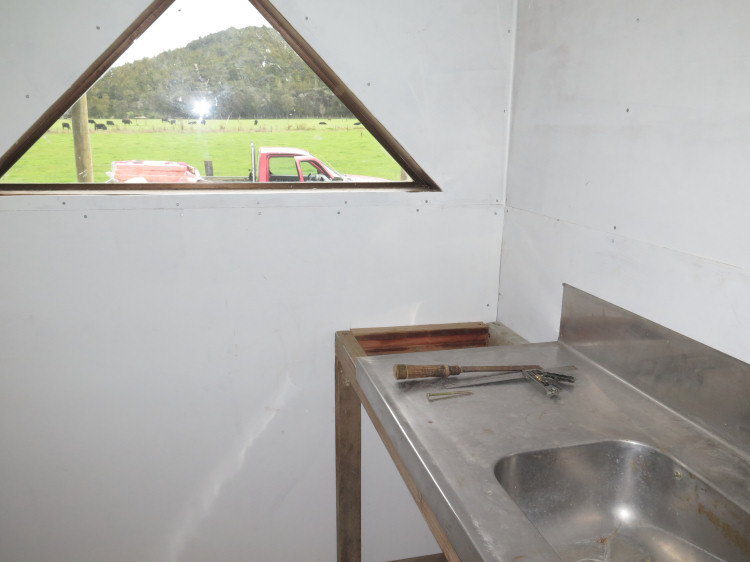 I called in to the yards on my way back home, finding that Stephan had finished lining the little shed, had installed the (recycled) window and under-coated the walls.

We both spent our day communicating in te reo Māori, our first full day for our day a week during Mahuru Māori. 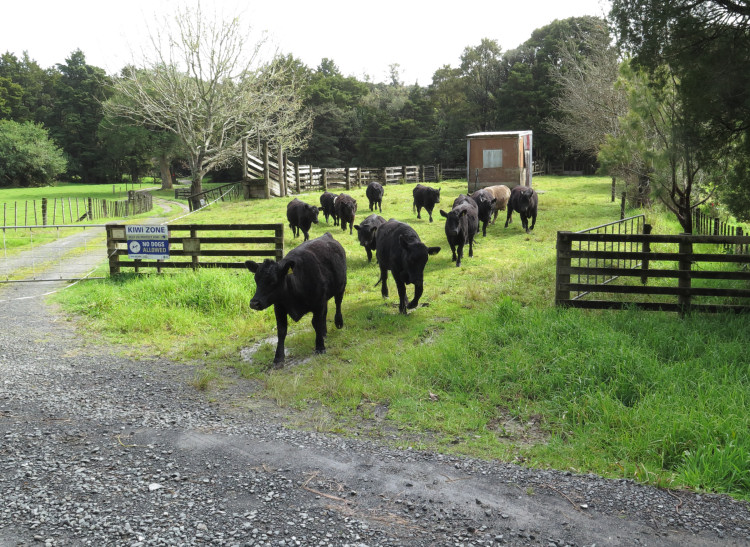 Time for the non-pregnant mob to go Over the Road and lessen the grazing load on the rest of the farm for a while. 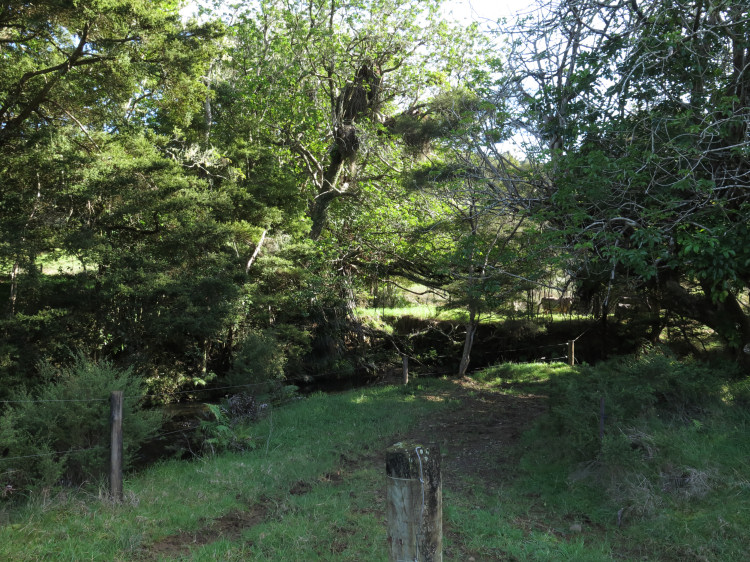 I've been going through another period of anxiety about this leaning Puriri tree, although comparing it with an earlier photo, it may not be moving much at all. The problem is though, that if it does go, it'll fall down very heavily, very fast.

We had a close look around the roots, checking for gaps or tears and there were certainly some areas where it looks as though the roots may have been pulled upward a little; but then again, the soil is so dry, so it's impossible to tell which may have caused a change in appearance.

My fear about this tree stems primarily from the horror I felt when the huge tree in what is now our garden and pond area, the one upon which the beautiful orchids later grew, fell in the early hours of an entirely still morning, causing a terrifying crash, jolting us out of sleep wondering what on earth had happened. Only a few weeks earlier, we'd had a contractor with a digger in that area, clearing some other ancient Puriri trunks out of the stream where they'd been restricting the flow. He'd been trundling back and forth beneath that tree and if it had fallen on him then, as it might well have done with the vibration, there'd not have been much left of him!

I think, despite our determination to protect the Puriri trees, that we should cut this one down before it falls on someone and we have to deal with the unbearable potential consequences. 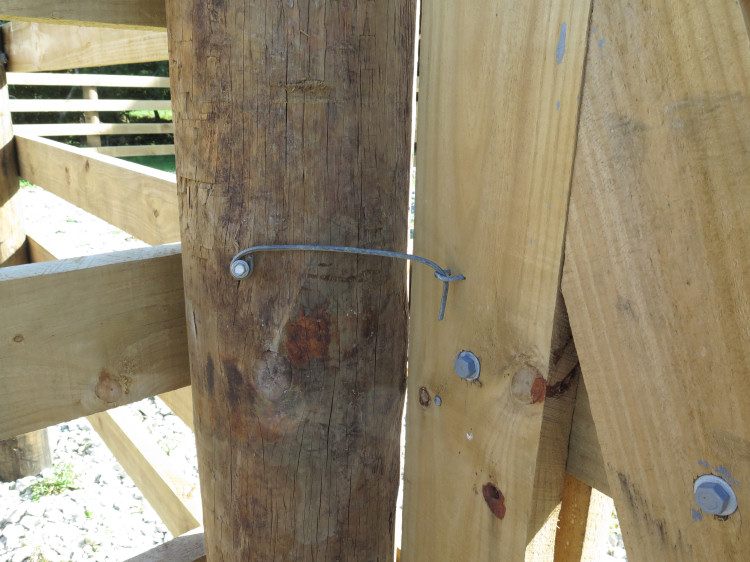 Now to some of the yards finishing touches, here is version one of a latch hook for the little access gate from our working area to the middle yard. It needs to be easily quickly operable but only needs to hold the gate shut against strong wind gusts.

The vet gate, the access gate by which a person can enter the race to access the rear of the crush and any animal in there, now has a latch lever to allow us to open the gate from the cat-walk. In the old yards I used the equivalent gate all the time to stop cattle advancing along the race but don't need to in these yards, because of the sliding steel gate on the crush. But a wooden end to the race may be useful if we want to deal with small calves in the there at any time. (Ordinarily it remains open, in line with the outer rails.) 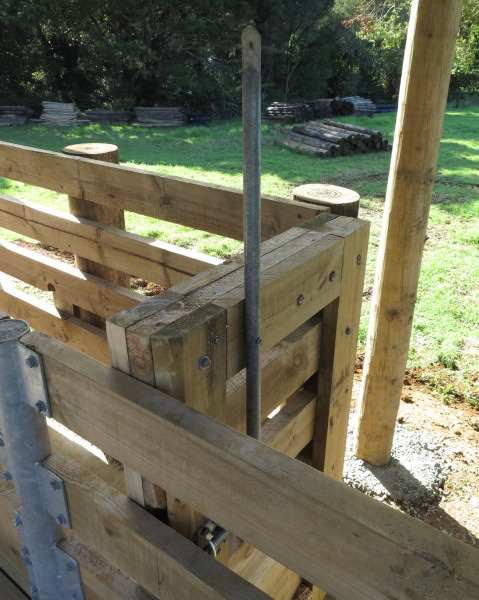 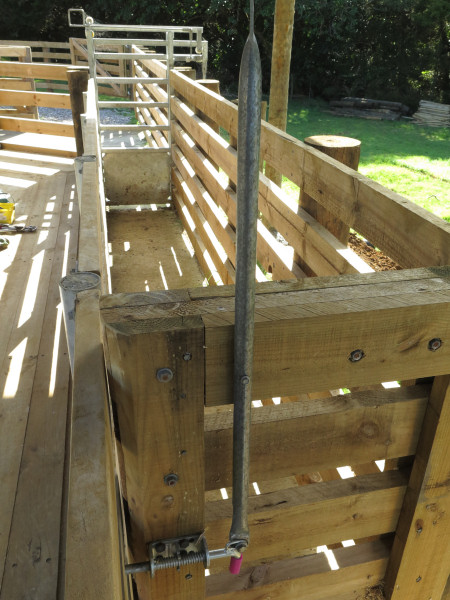 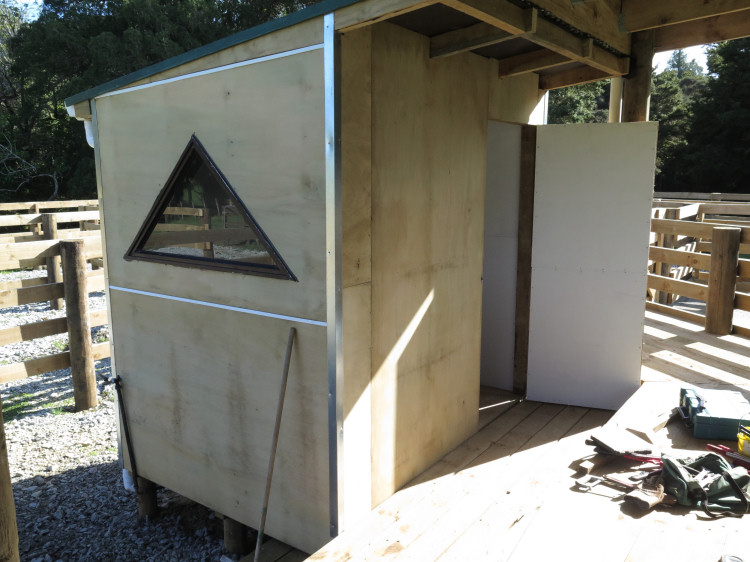 The shed has a door, working taps (inside and out) and will soon have drawers and shelves within for storing all the gear that ought to be near the cattle yards. 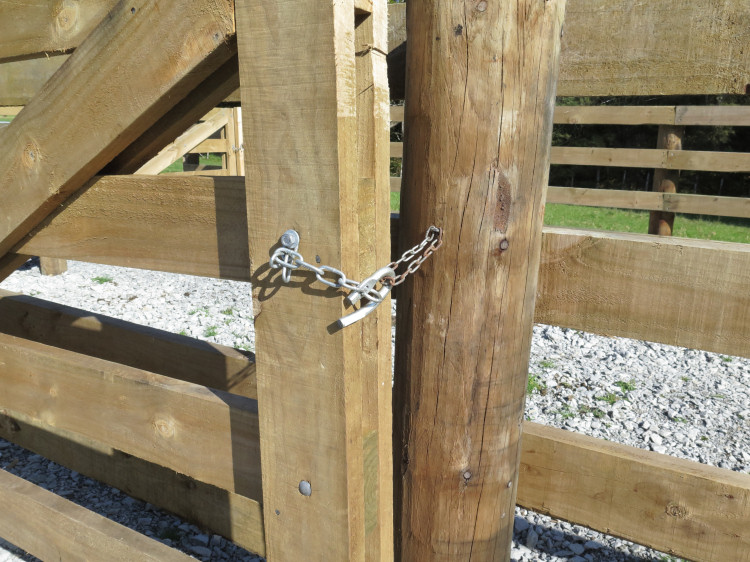 We discussed how to hold the yard gates open and came up with this idea: bits of chain so they're weather-proof and unlikely to be chewed by the cattle, which bits of rope would be. 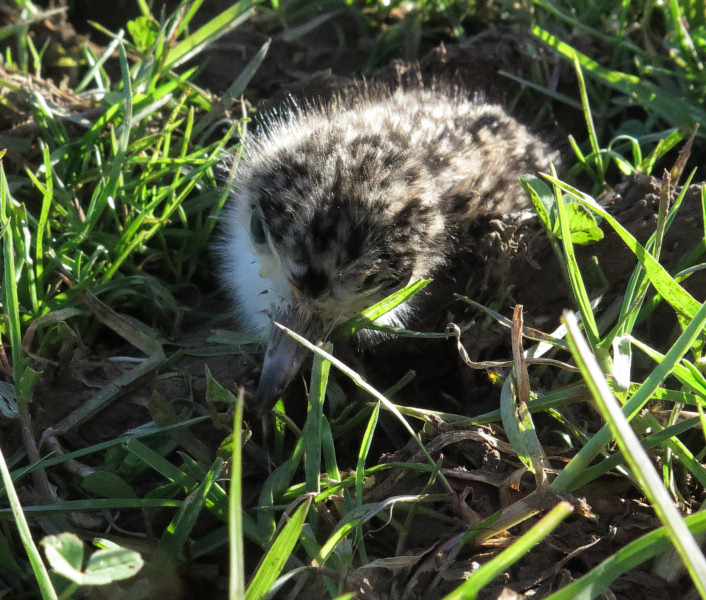 This little Plover chick crouched down in the grass when I surprised it in Flat 4.

They're funny-looking birds with their face shields already present; those bits will be yellow when the bird is an adult.

We began another day of te reo only but had to make it a half-day event due to a mismatch in linguistic abilities: the cows simply couldn't understand what I wanted; or another reason, I really couldn't say. 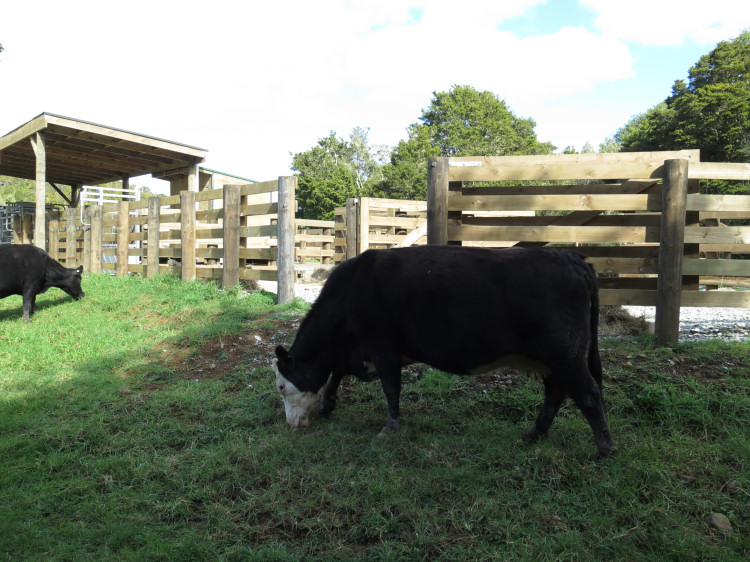 We distributed a bale of hay around the pens in the yards this morning, latched all the gates open and let the cows graze the small area around the yards, so they could come and go in and out of the pens as they felt comfortable.

It will take them a while to get used to it all, but they will. 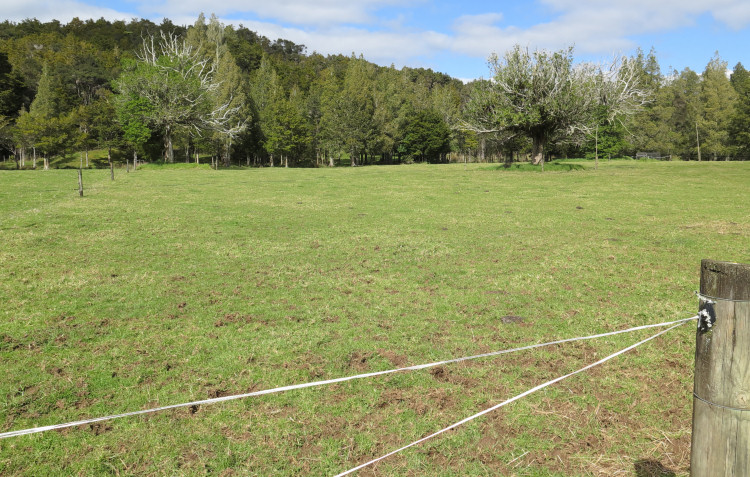 There wasn't much grass left in Mushroom 2 when I took the pregnant heifer mob out on Monday. Come on, warm spring weather! (Not that we usually have warm spring weather but there's certainly the chance of it in this weird season.) 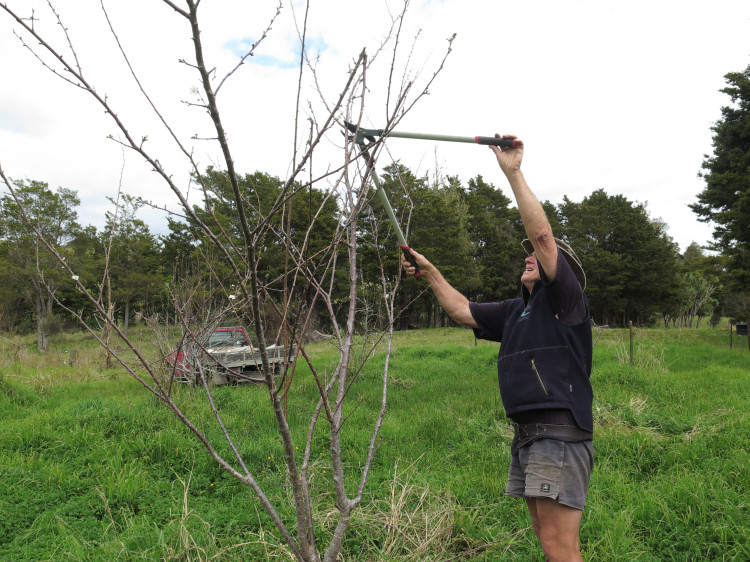 It being a lovely fine day we went up to the orchard to do some tree pruning. We didn't get around to doing them last year, so there's quite a bit of disorder to address.

Beneath this tree was the Pukeko nest I found last week, with one egg still unhatched. I picked it up to feel if it was warm or not - I always find pressing an egg against my ear the most reliable way to feel variations in temperature and then I can hear if there's a chick cheeping inside as well - and then realised that it was emitting an awful stench: rotten. Fortunately it didn't crack as I hurled it away into some far grass. 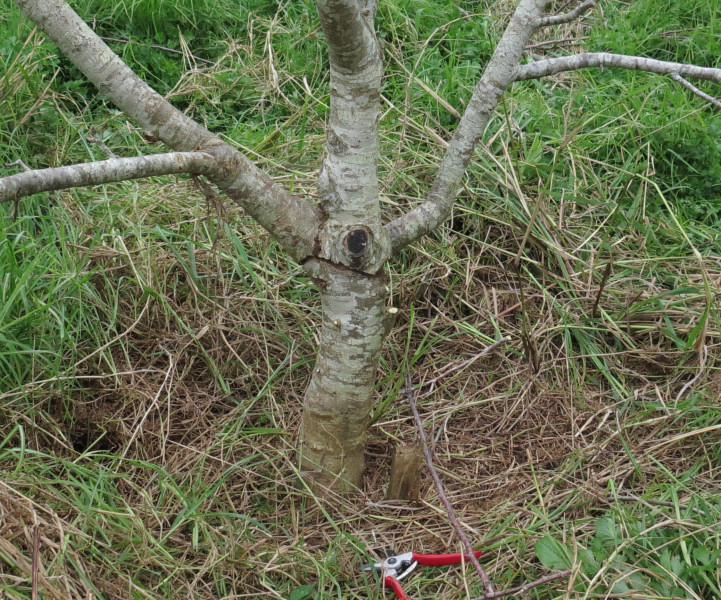 I can't understand why this tree isn't dead: it appears to have a ring-barking groove all around its base. I have a vague recollection that I've noticed it before, so it must not be life-threatening, even if it looks that way. 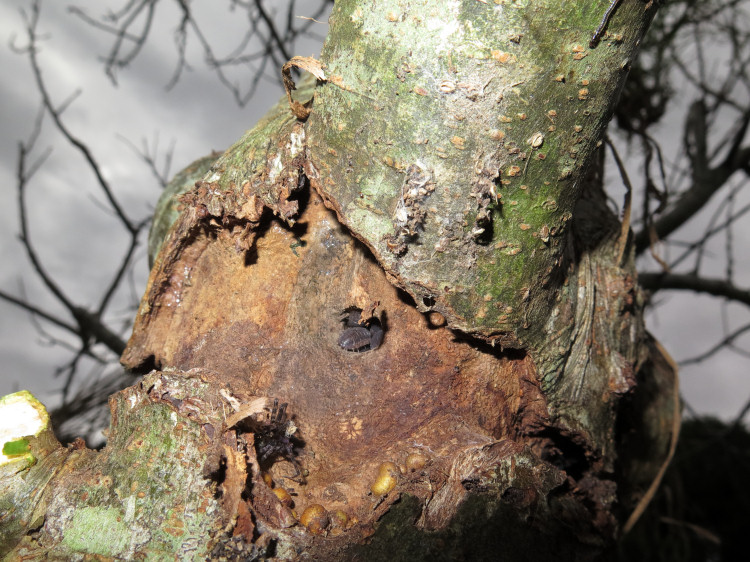 There are many creatures living in holes and under the bark of the tree around the scar. I cannot think how it could have come to be like this. 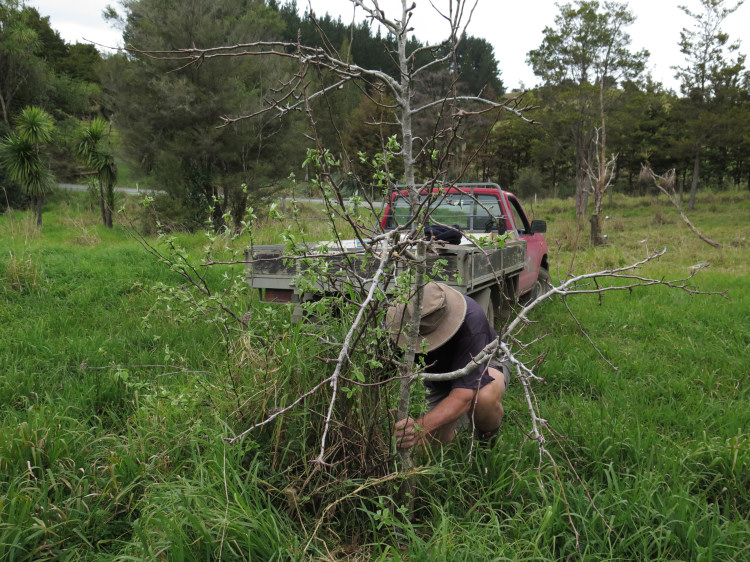 We couldn't get all the trees pruned but on our way out we took care of this one: the green leaves are on growth from the root stock, not the grafted tree, so Stephan cut it out. 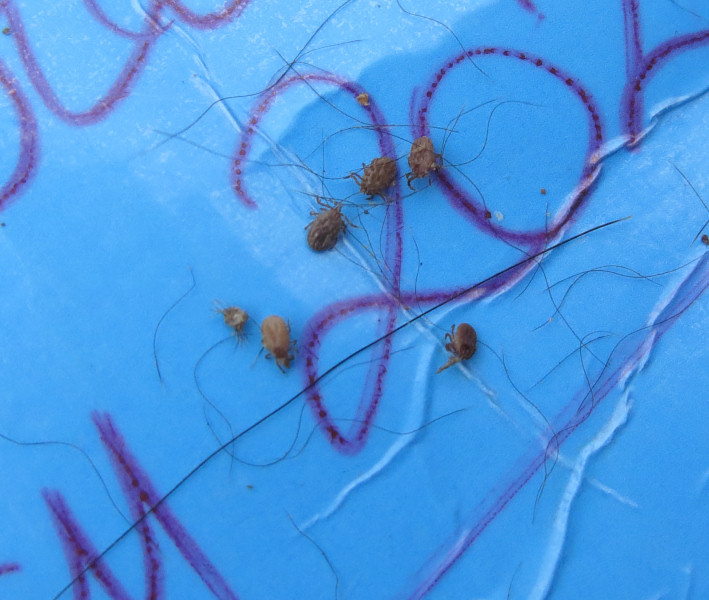 Tick nymphs from the udder of one of the cows. I scratched and pulled them off and put them on my notebook for easy squashing with the end of my pencil. They're very tough to kill by rubbing between one's fingers, much easier to kill by pressing down with something hard on something flat. 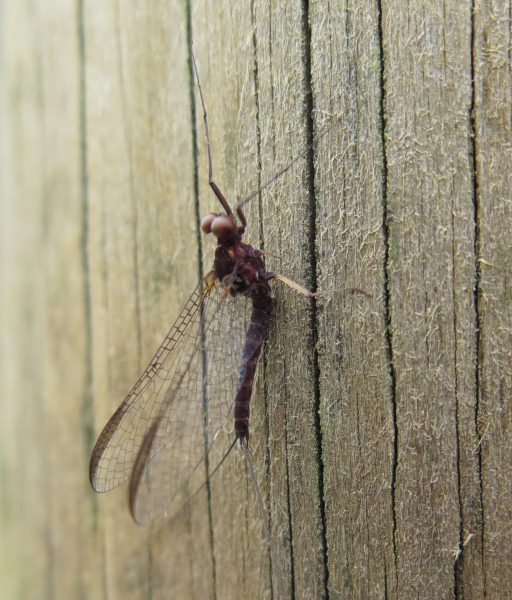 A Mayfly on a post. I've not really noticed them much before but now I see them all over the place. A Septemberfly, perhaps, in this hemisphere? 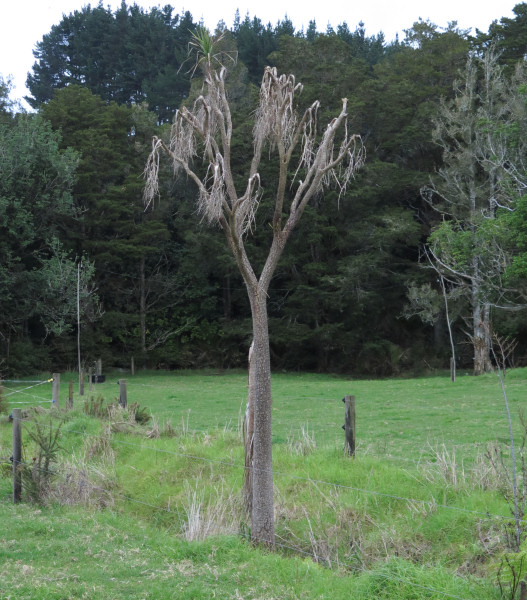 The nearly-dead Tī Kōuka in the drain between Flats 1 & 2 has the tiniest bit of green at its top. It began dying in January, prompted but probably not caused by the drought. 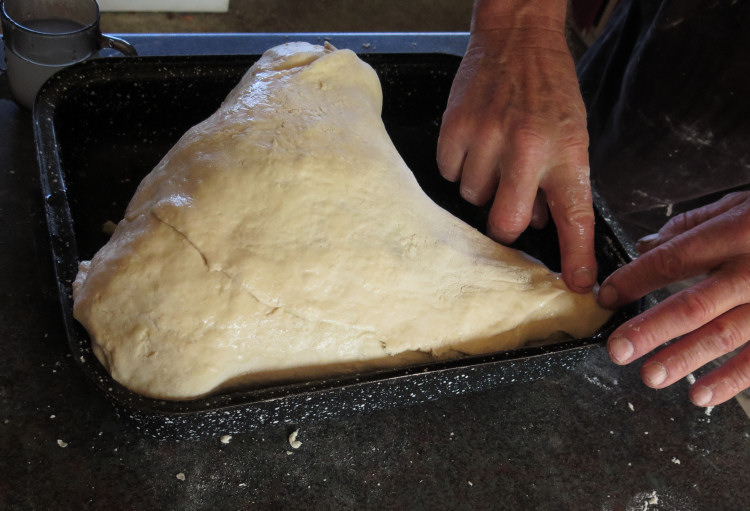 We rarely do housework until we have to, when we find there are no dishes to use, no clothes to wear or nowhere to sit, unless we're expecting visitors. Fortunately that happens often enough that our situation does not become extreme very often.

Today we tidied and Stephan set about preparing to cook a ham: Cathie and Andrew are on their way up to visit us again for a couple of days and we're going to have a birthday dinner together tomorrow night. 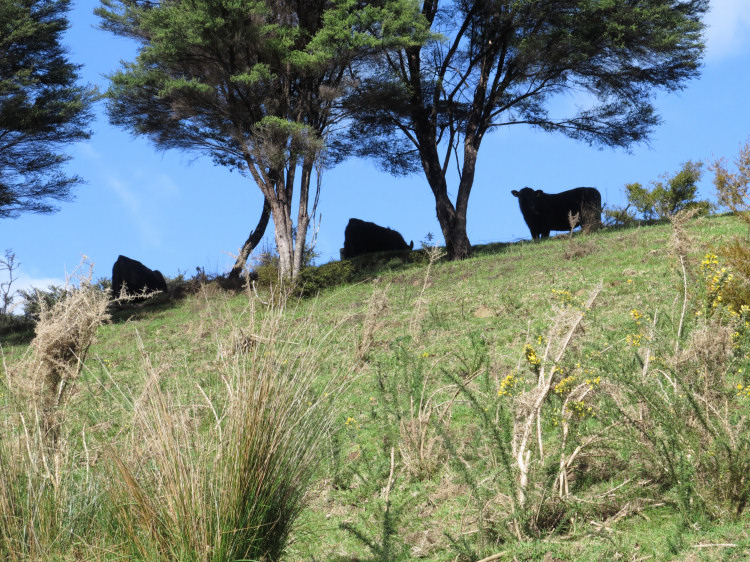 I still had to go out and check the bulls, having not seen them since Sunday.

I walked up the track in the Big Back North, thinking I'd probably chosen the wrong way to go but then looked back over my shoulder and saw a bull on the slope above me amongst the trees. The others were all up on the ridge.

I climbed up to make sure they were all in good health and looked down on the rest of the farm in the late-afternoon sunshine. 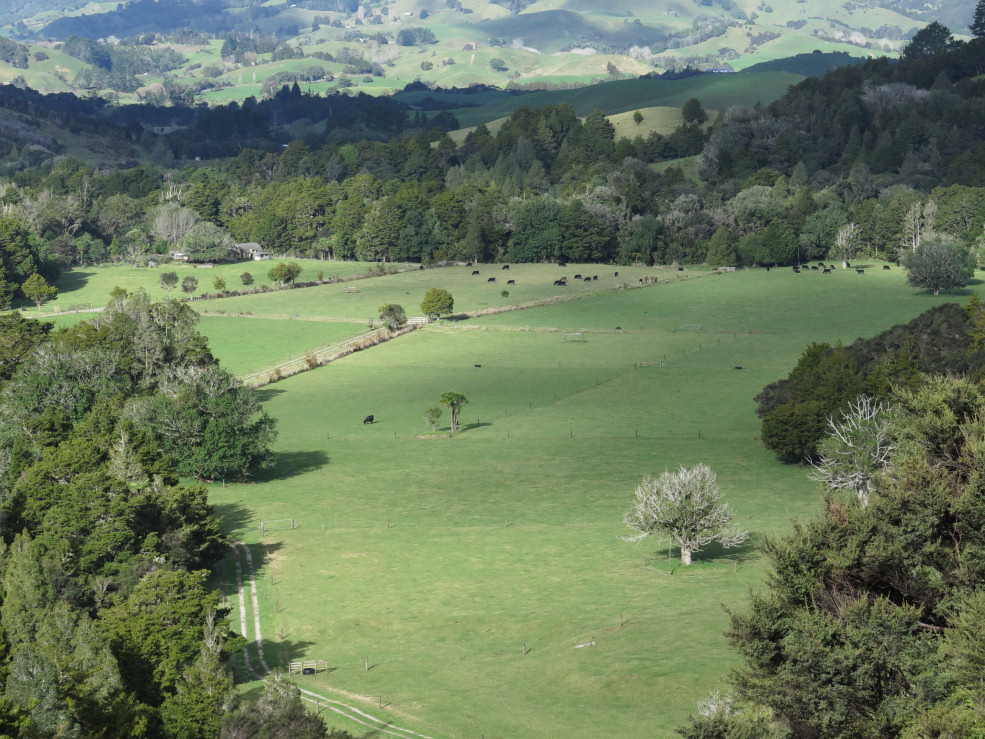 In the upper centre of the picture are the cows, in the bottom half of Flat 1. My next job was to move them, drafting out the four I think will be the first to calve, so I can keep them on the flats for closer observation and so I can begin giving them molasses and Magnesium Oxide prior to calving. Only three weeks to go until calving begins!