The week beginning the 7th of March 2020.
Saturday the 7th 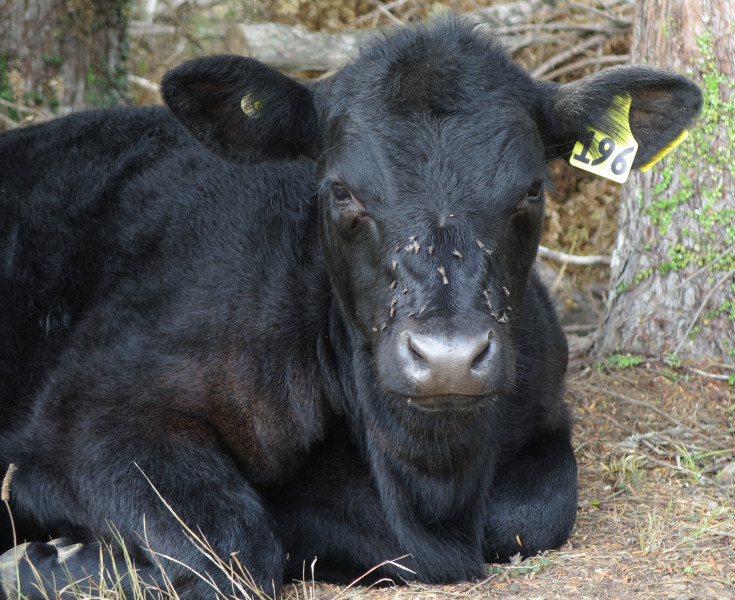 Flies are revoltingly abundant this summer, everywhere. There are thousands in our house and just as many annoying the cattle.

They gather on the faces of the calves more than on the cows, presumably because the calves have milk residue on their faces.

Mid afternoon we drove for an hour out to Karikari peninsula on the East coast, in to Whatuwhiwhi, then continued on around to the third little bay beyond the end of Tokerau Beach. We didn't really know where we were going, had some rather indistinct directions and remained unsure of ourselves until we rounded the last corner, parked and asked someone if we'd arrived in the right place!

There was a small community of houses and a whare (house/building) that a couple in our te reo class had rented for the weekend, for his sixtieth birthday. We met their sons and grand-children and many of his siblings he'd not seen for decades. It was a lovely occasion with a fantastic meal.

I don't know how many of our class were invited but we were two of five who attended.

There have been very few occasions in my life when I have been (and in this case we, Stephan and I) the only Pākehā present and I have always found it strangely thrilling. This time was probably my most comfortable experience because of our last two years of study and involvement with our lovely class-mates. Everyone is always welcoming and inclusive and whenever anyone said anything in te reo, I understood them. We had such a lovely evening.

A quiet but sociable day: Stephan went off to drag huge felled trees around with friend Brian and I ended up sitting on the stile chatting to neighbour Sandi for about an hour, after she said she had a bag of lovely tomatoes for us.

Later Christina came out for a visit and a meal with us. 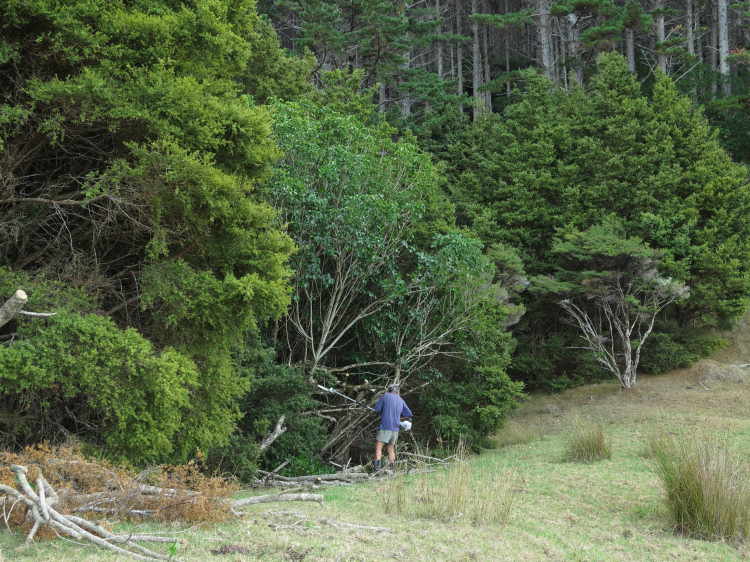 After Christina left we went up to the top of the Big Back again to cut Puriri for the 24 cattle there. 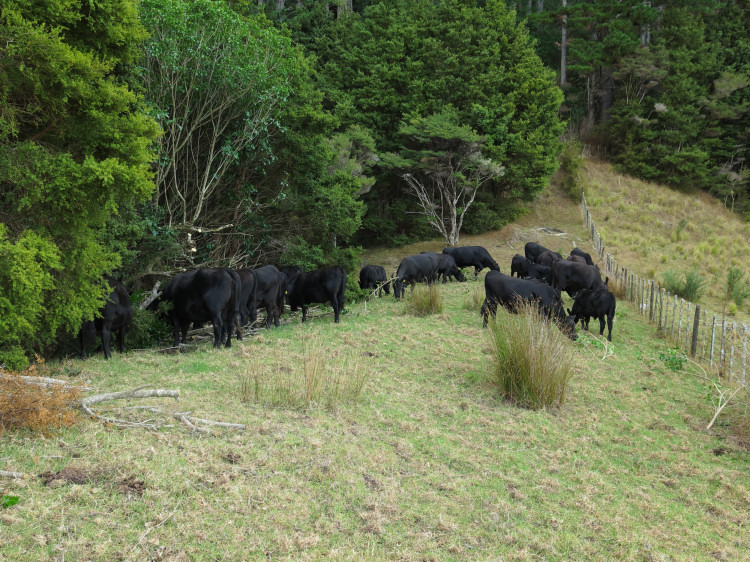 I thought they might appear as soon as they heard the chainsaw but it took several minutes of calling before I heard some closer mooing and the animals came running for their treat. I hope it wasn't actually more than they'd otherwise had to eat all day.

It rained! Not enough but 10mm is a decent amount to make some grass feel a bit happier. 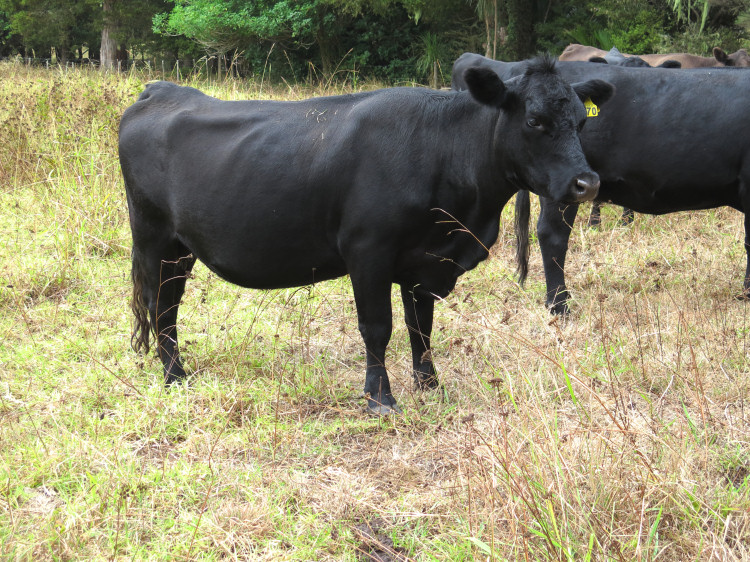 I checked on the 21-mob and noticed Dushi looking worryingly thin and not altogether well. I don't think she's sick, exactly, just not in great health. We need more grass! 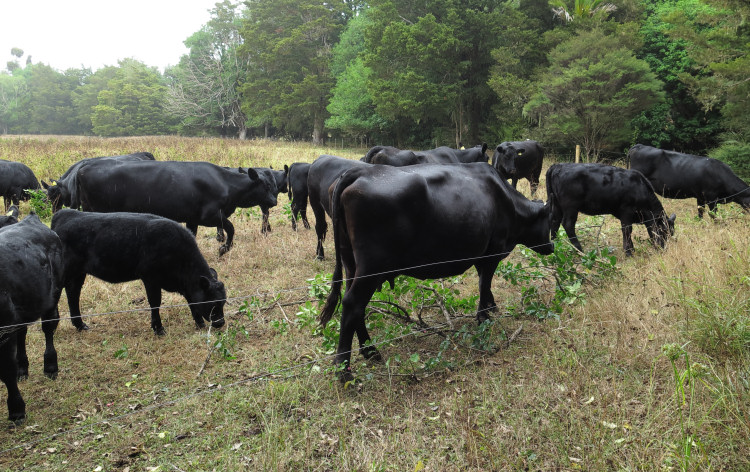 I thought they could stay where they were for a little longer, if I brought Stephan back with the pruning chainsaw to cut them some Puriri. 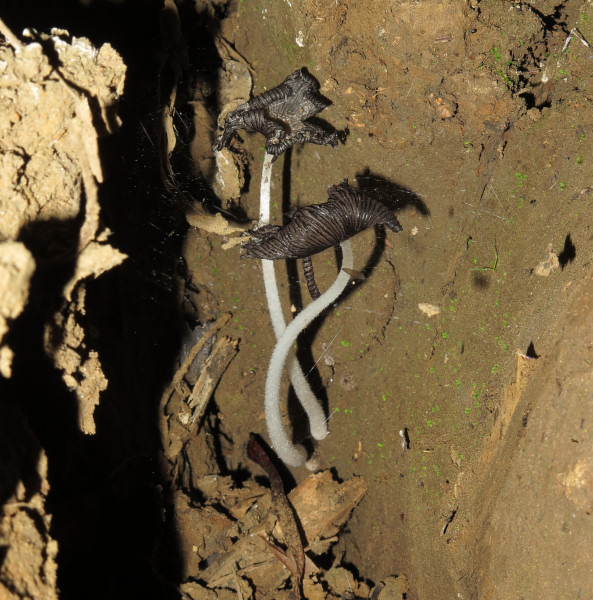 These fungi were growing in a deep hoofprint in the mud by the stream. I noticed the white of their stems as I stepped out of the water. 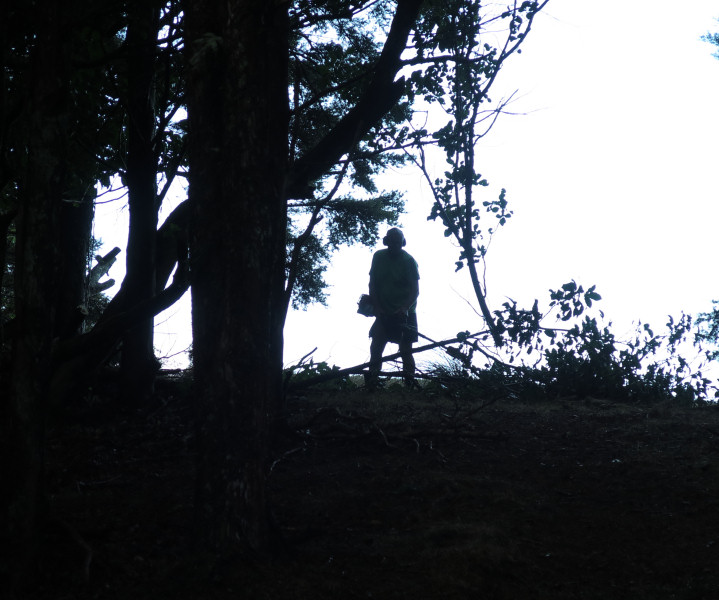 In the evening we went up the Big Back hill again to cut more Puriri for that mob. 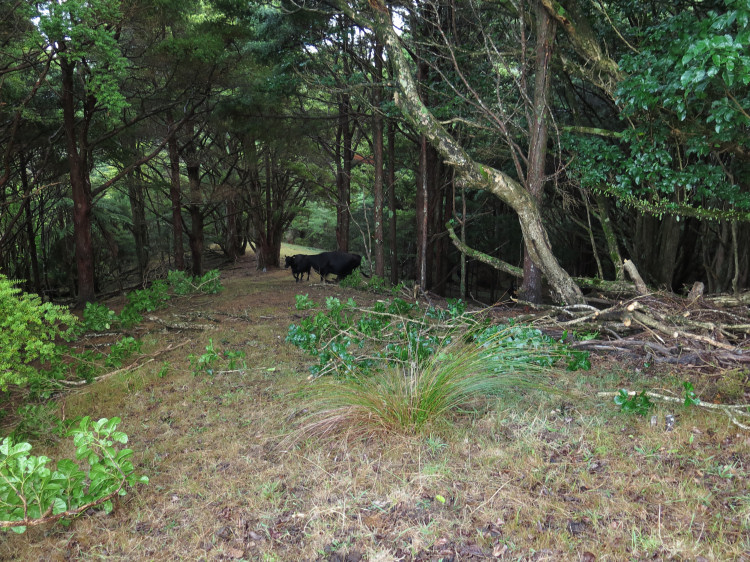 Hearing the chainsaw, it wasn't long before they came running up the slope.

We dragged the branches out so that everyone could eat some, otherwise the keenest bullies push the younger and smaller animals away. 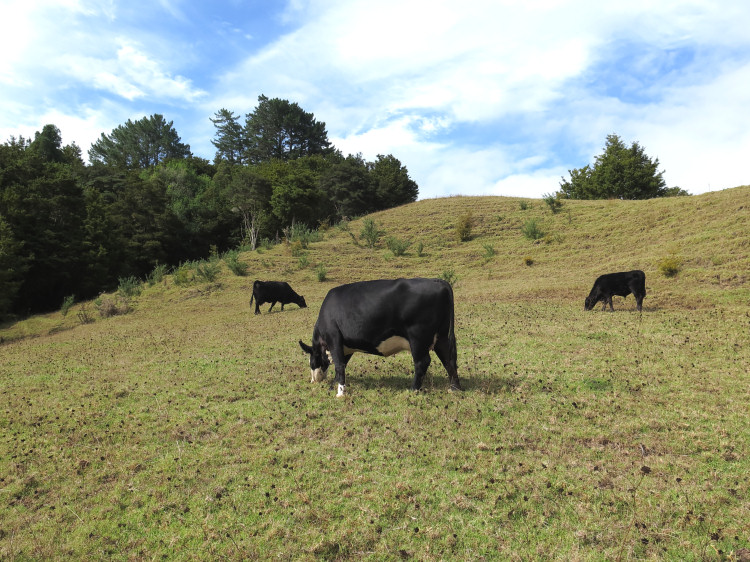 After moving Dushi's mob back across the stream this morning, I climbed the hill Over the Road to check the mob of 26 cows and calves. The grass is crispy, although with the rain yesterday, it's probably a little softer for them to eat today.

The black dots are the dried Parsley Dropwort flowers. They're horrible when like this, being prickly and stiff and if two get caught together as you walk through them, they're tough enough to trip you up. Down on the flats we'd normally have mown them off but not during this hot, dry summer. They might be providing a tiny bit of shady relief for the struggling grasses! 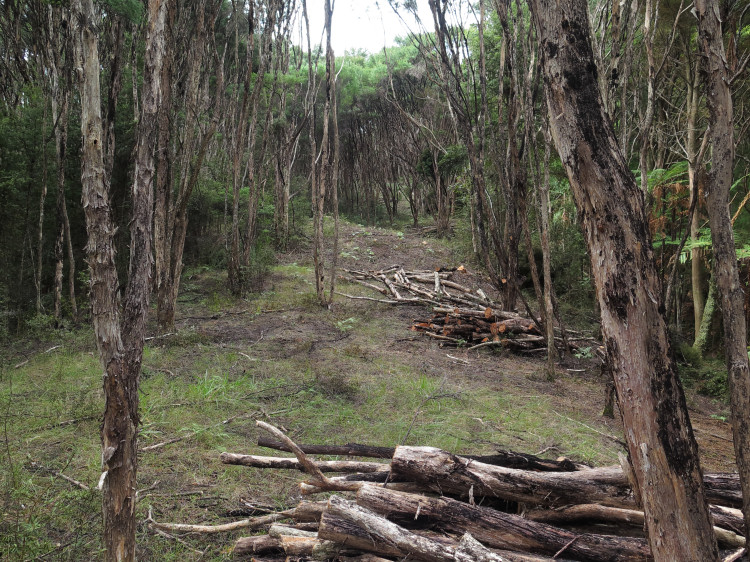 Stephan has been working hard out here, cutting his way up the slope to work out where the new fence will go.

We're going to have so much firewood! 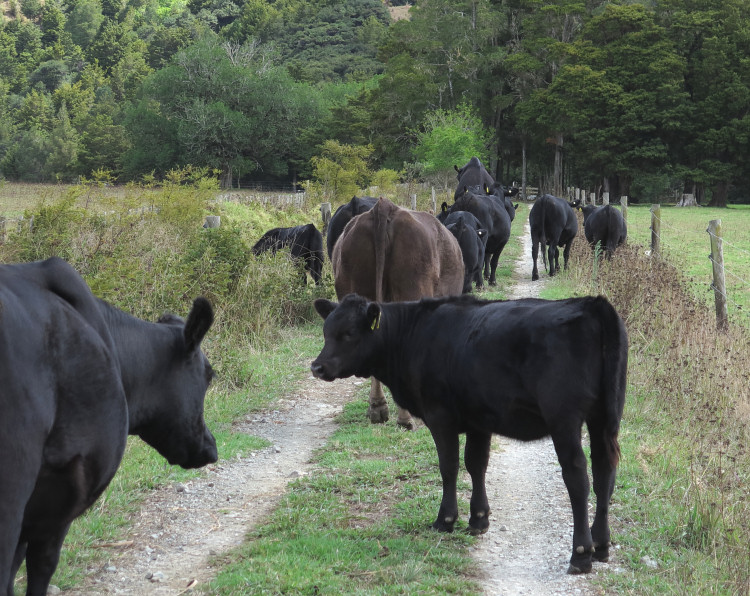 This lot are moving along the lane after I brought them along from Flat 4 to the yards to weigh and pour-on-drench Dushi 170, in case part of her problem is being caused by internal parasites. Oddly her weight was only 8kg less than the 520kg she weighed on 13 January when she was looking really good. I wonder if she's been through a growth spurt, so the weight is in bone and organs, when earlier it was carried in more fat on a smaller frame? I hope that's all it is.

Then I sent them on their way out to the Swamp East Right.

The cow being ridden at the front of this group is Gina 168, back on heat. I'm extremely disappointed. I like her so much and I'm going to have to think carefully about whether or not she can be forgiven and stay to try again next year, when she'll be three, therefore not calving until she's four. Calving for the first time at four is risky, inefficient and often comes back to bite one in the rear. But I'll think about that question another day. 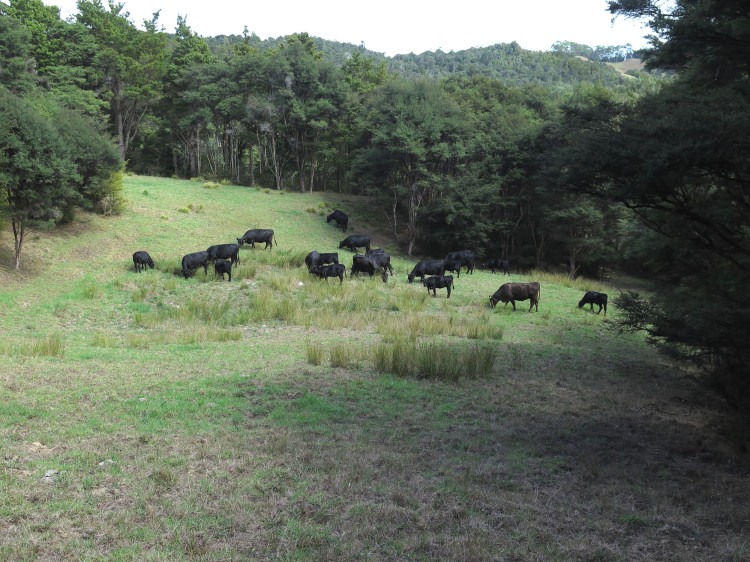 Here they are in the Swamp East Right. The patch of rushes and pugged ground where they're eating appears in the black-and-white farm picture last week in the lower right corner. I suspect the boggy rushy place is where underground water emerges and is causing the slow slip that is obvious in the old photograph. 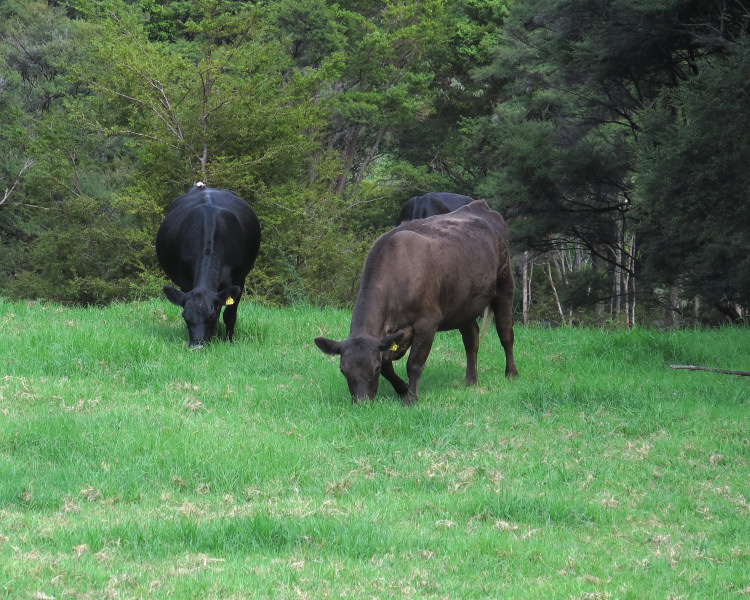 Up the slope in the top clearing, there was long Kikuyu! What a treat.

Grey 812 is the other youngster who's looking a bit bony. I didn't drench her but I may do soon. 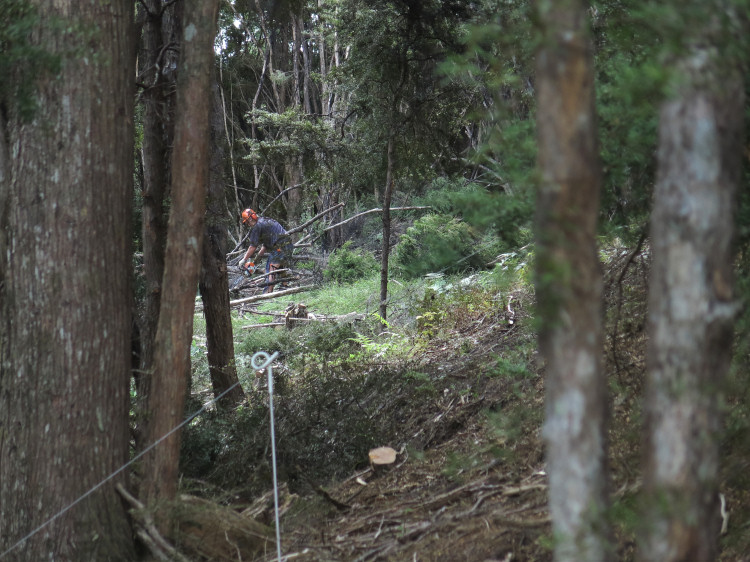 Where Stephan is currently cutting, through the trees, will end up as part of this paddock. It's fun working out how various clearings could be joined together by clearing some of the Kānuka.

Te Papa Tongarewa, the national museum in Wellington, has been doing a mosquito census. Twelve days ago I packed up all the mosquitoes I'd caught and sent them away in the post. They didn't travel very fast, only arriving there yesterday. This afternoon I received an email identifying them all. Most of those that wake us in the night are an introduced pest and all of that species in the sample were identified as "blood fed"; yes, I replied, that was mine and Stephan's!

The species I caught were: Aedes notoscriptus x 1, Chironomidae (non-biting midges) x 3, Coquelletidia iracunda x 2, Culex pervigilans x 3, Culex quinquefasciatus x 12. The twelve were the blood-filled suckers I took the most pleasure in catching and putting in the freezer! On one of the very warm nights I'd got up at 1am to find and hang a mosquito net over the bed because so many of them had streamed in through the necessarily open window. I cannot stand their whine as they fly around my head and sometimes, in a semi-conscious state, I slap at my own face to try and kill them and nearly always miss. Infuriating creatures.

Mathew came out today to help Stephan with the tree cutting and stacking. All the family share in the marvellous firewood that results from these efforts and Stephan really appreciates the help with the primary aim of clearing for the new fence.

Today marks one year since my hysterectomy surgery. During these months of pain I told myself I'd re-evaluate when I reached the year mark. Here we are and I still have pain; damn. The improvements are long and slow in coming. This too shall pass. 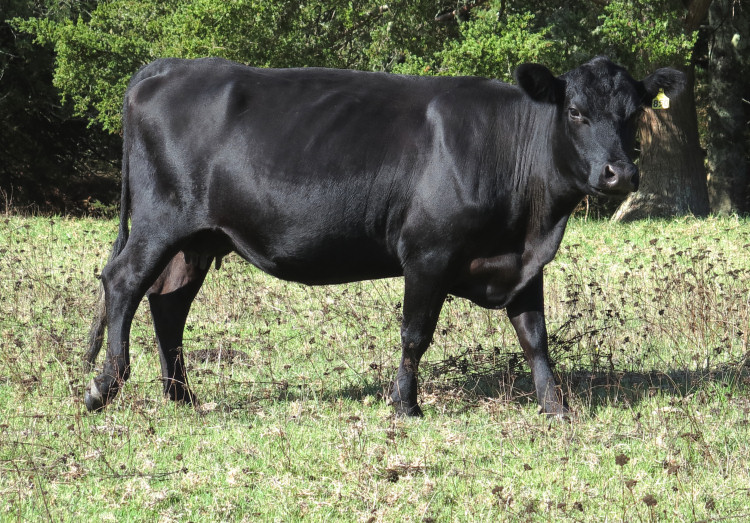 Zoom seems to be holding her condition reasonably well, despite the ongoing feed restrictions. Her calf is looking very impressive. 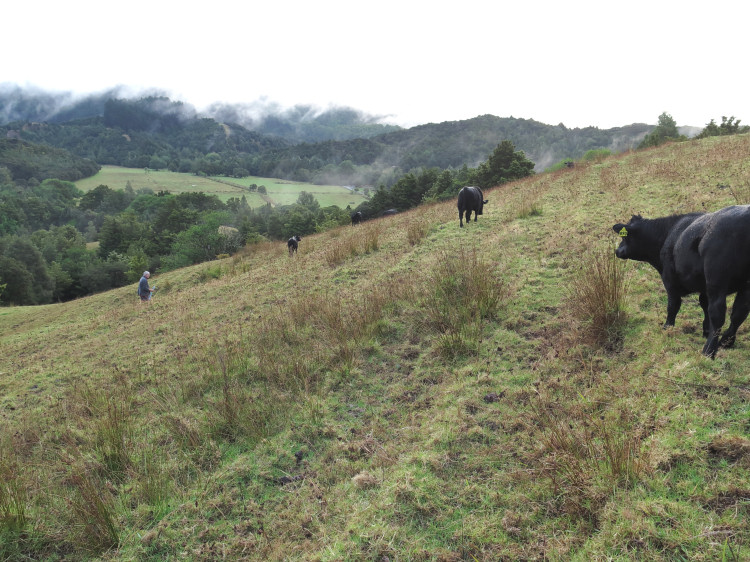 At around five o'clock there was rain! When it stopped I measured just over 8mm in the gauge, which isn't very much but will still make some difference.

We both went out the front to call the cattle down from the hill Over the Road. When we counted the animals who'd responded to my calls, two cows and five calves were still absent, so we had to climb the hill to go and fetch them from along the Western face.

At 9.30pm there was more, quite steady rain. Still not enough but way better than nothing. 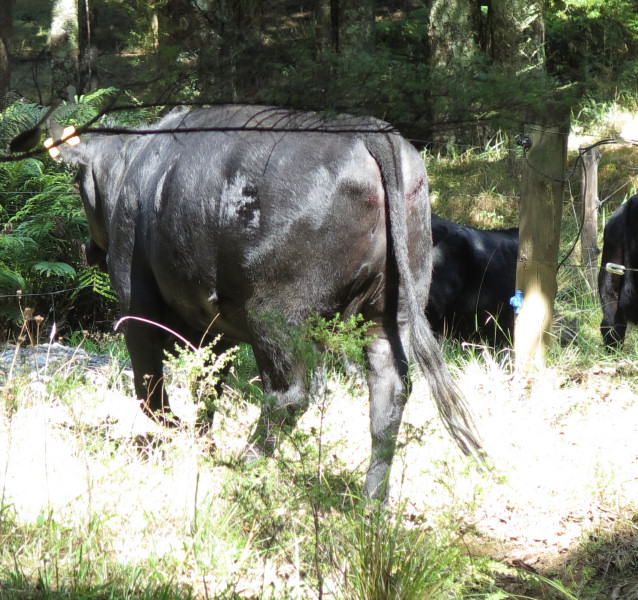 Gina 168, with blood smears on her rear. There is no doubt she is not pregnant.

(You will recall that cows often have a bit of blood 24 hours or so after ovulation.) 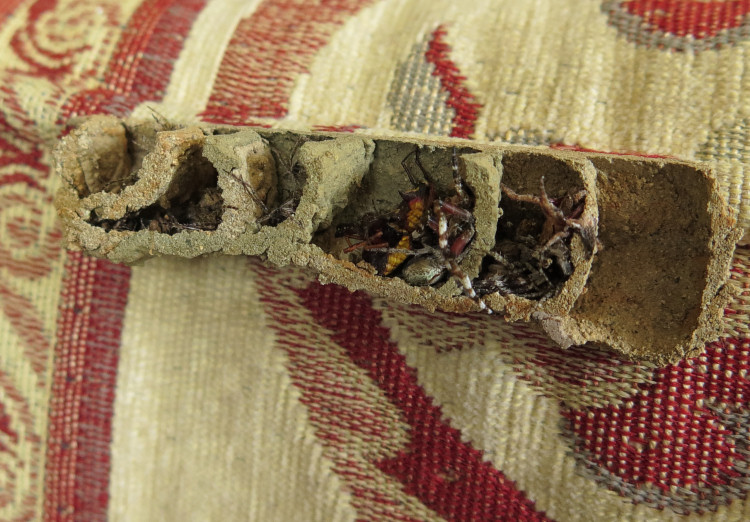 I moved a pile of something off the couch and later noticed this Mason wasp nest. I used to find Mason bees (as we always erroneously called them) fascinating but when I learned more about their hideous behaviour in stinging spiders into long-term paralysis so their grubs could have "fresh meat" when they hatch, I began to feel quite differently about them. I wouldn't mind so much if they came into the house and took away all the daddy long-legs spiders from the corners of every room but those are not their prey. The spiders they hunt are the enormous range of often very pretty orb-web spiders.

Cathie had phoned and left a message on Wednesday evening, asking if we'd like to see her and Andrew for the weekend. Lovely, I replied. We were expecting them to arrive around 3.30pm. Just after the three o'clock news, as a sort of post-script, the announcer said there'd been a fatal car crash near Towai (which turned out to be actually just north of Hukerenui) and when our guests didn't arrive and we'd heard nothing from them, I started to worry!
My time calculations of their trip put them right there at the time the crash had been reported. When they did arrive just before 4pm, we were both tremendously relieved. They said they'd been just beyond the crash site when it happened and a cousin, with whom they'd lunched in Whangarei and was following them north, was just behind it. You just never know when your life's going to change and fortunately, today, it was not our friends involved. 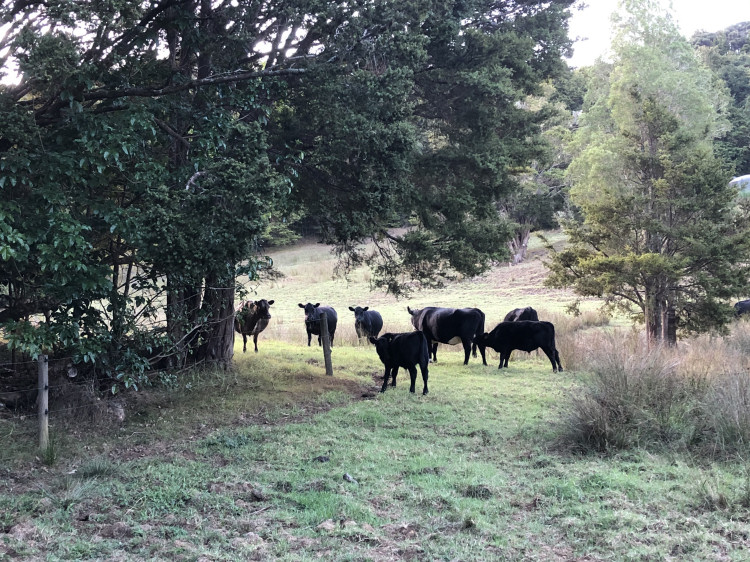 Andrew came out with me to check on the cattle, and as we walked past some of the cut branches of previously fed Puriri in the Tank paddock, Andrew picked some up and threw them over the fence into the reserve. He was spotted by some of the cows, who immediately ran over, thinking it was feeding time again. This is what disappointed cows look like.

Note the calf feeding from behind his mother: that position still appears to be 896's favourite. I don't think I've ever seen him feed from the side.