The turkey was hatched by a chicken, who had made her nest beside our front door.  His was one of three eggs which some friends had given us from the nest of one of their sitting turkeys but he was the only survivor; one of the eggs was infertile and the other chick didn't make it out of its shell.  When he was little he was quite friendly and wandered around with the chicken chicks as they all grew up together, but as soon as he reached puberty he became increasingly threatening and eventually quite vicious (see him fighting Stephan!).

We had hoped the chick would be male because we have a hen turkey here who sat in lengthy futility on a nest of her own last spring, until we removed the remaining eggs (most had popped when they became too rotten) and chased her away to have a good feed.  This year, we hoped she'd lay fertile eggs and we'd have a few turkeys bred here, which might go out and live around the farm.  (No doubt along with all the other things we hatch they'd actually end up living around the house!)  We are now wishing they'd just get on with it, because as soon as the male turkey has done his job, he's going in the oven or the freezer for Christmas, before he does some serious damage to one of us.

The female turkey arrived on the farm around 1998.  She just appeared, in the middle of the farm, on her own.  After a few forlorn days just hanging around near some trees, she disappeared.  The next we heard was that there was a strange couple in the neighbourhood; a turkey and a pukeko were being seen frequently in people's paddocks and on the road, seemingly as a couple.  Eventually, presumably when the pukeko breeding season started, the turkey ended up here again, taking up residence with our chickens.

Late in 2002 we found her dead, under the tree in which she usually roosted at night.  She hadn't appeared ill and hadn't been attacked by anything.  We don't know how old she was.

Our next turkey experience resulted from Stephan finding a hen turkey on the side of the road where he stopped the Topmilk truck to deliver some milk.  As he got out, the turkey stood up and left an egg, on the ground, so he brought it home.  The egg sat on my desk for a couple of weeks and eventually I put it under a hen.  The chick hatched and grew into another female turkey.

The rest of our current flock of four (mid-2006) were three chicks which came from Maungaturoto, from a guy called Tony, whom I've never met.  He very kindly dropped the chicks off at the Vicarage in Whangarei and my mother then transported them north.  All three survived: two males and another female.  So far the males simply glide around like tall ships in full sail, looking terribly threatening and quite majestic, but as yet showing no actual violent intent.  Long may that continue, or it'll be a turkey roast for Xmas dinner again!

Another of the strays who've ended up living here...

The Peacock just walked up the driveway one day.  He has an injured left wing, but can still fly very well.  When he arrived we weren't sure what sex he was because he was mostly brown.  But it turned out that he was simply still quite young at that stage.  Last year (2000) was the first year his feathers had decent eyes in them.  So this year, we expect he'll be absolutely splendidly feathered.  This is how he looked at the beginning of August 2001, with the tail not completely grown - many of the feathers are still quite short.  The peacock does not have a hen bird.  We occasionally hear of people wanting to get rid of some of theirs, but are cautious about finding him one.  One peacock is quite noisy enough.

These are two of the first three Pheasantams, at the beginning of March 2002. The third, which has light plumage, somewhat like a female pheasant, but more orange, lives up with the chickens and is, like these, unapproachable. 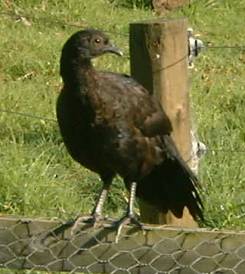 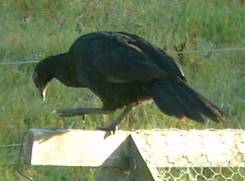 We were given some Muscovy duck eggs, which hatched at the end of 2002, and grew into a pair of huge ducks.  In mid-May 2003, we acquired a goose, who needed a new home when her previous humans moved house.  These three large birds quickly formed a close family unit.

In June 2006, we still have the Peacock, the hen Muscovy and a number of her daughters and grand-daughters, the goose, but all the Pheasantams died.  There are also eight pigeons flying freely around the sky, and hopefully we can keep control of their breeding so that they don't quadruple in number again!

In April 2012, the only remaining member of this collection is the goose.  There are several turkeys, but of different stock than the original fierce bird.  The Muscovy ducks had to go because they continually produced pretty yellow fluffy ducklings which, unless we caught and reared them, died as they gradually fell behind their careless mothers.  We eliminated the drake, but the ducks took to laying nests high in the trees, so we could never eat their eggs.  When they flew through the cattle every time we brought the cows to the yards causing dangerous stampedes, the ducks simply had to go.