It being Easter Weekend and therefore a four-day long break, my brother and his wife had ventured north to Opononi, so we went down to visit them and have lunch together.  There was an astonishing amount of traffic on and waiting for the ferry.  We'd set off to catch the 11am crossing from the Kohukohu side, but when we arrived discovered that the ferry was "shuttling" because of the number of vehicles wanting to cross from the southern side, so we had to wait an extra twenty minutes for it to come and collect us. 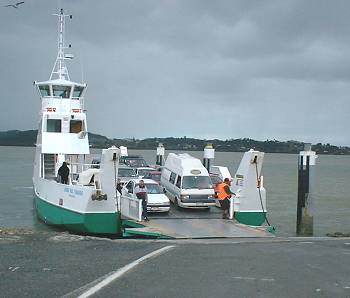 I don't think we've ever seen cars tucked into the corners on the ferry deck.  When we arrived over at Rawene, the queue for the ferry contained far more vehicles than were going to fit on the next trip.

We had a very nice lunch with Bob and Shirley and left mid-afternoon to come home again.  In a freak of good timing, we drove down the Rawene hill, onto the ferry, the gate shut behind us and away we went!

The weaner calves for sale will go to a supplementary weaner fair at Kaikohe on Wednesday, so I needed to weigh them and their mothers.  Those final weights help confirm the fate of some of the heifers - whether they go or stay depends very much on their growth rates to weaning. 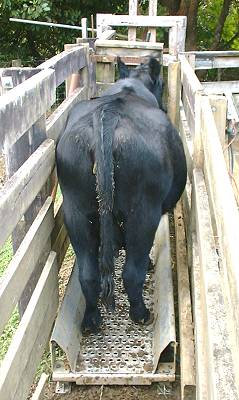 Here is Abigail on the scales.  All our animals gradually get used to this system: they walk up the race one at a time, stand on the platform quietly while I record the weight, then the small gate in front is opened and the animal walks out and into whichever yard I wish her or him to wait.  As calves they're not quite so cooperative until about the fourth or fifth time through, when they begin to realise that it's quicker and easier to stand still for a moment and that nothing nasty is going to happen to them while they're there.  Some of the animals just don't settle and that is sometimes the final strike against their record in the decision to send them to the sale. 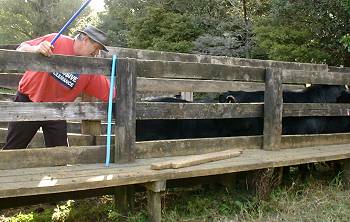 After I'd weighed them all, I brought the data back home and computed it in various ways until I had decided which heifers I'd like to keep and which would go.  Stephan came over to help tag them.  They've all had one large numbered tag since early in their lives, but the Animal Health Board regulations require a secondary tag with our herd number on it, for each animal if they are leaving this property, so we only put them in when we know which ones are going to the sale.

The ten heifers I'm keeping went with their mothers over to one of Jane's paddocks, next door, so they were out of the way until the others have gone.  That was partly because it was easier to have drafted the "keepers" out of the larger mob and also because I'd not like a heifer I want to keep to suddenly decide she wanted to go walking with her mates as they went past down the lane, and end up on a truck to Kaikohe! 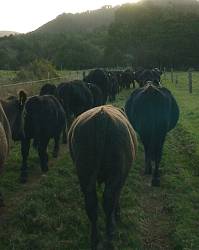 The other 25 cows and 25 calves went back out to a nice grassy paddock for their last two nights together. 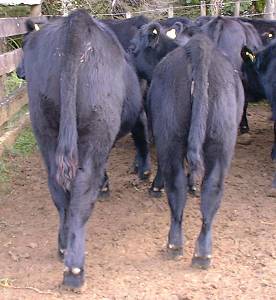 The calves were to be picked up between 8.30 and 9am this morning, so I brought them in early, took some more photographs of some of those I'd not already recorded last week and then drafted the cows off from the calves for the last time.

These are the biggest steer and the smallest heifer, who just happened to stand next to each other for a few minutes.  On Monday he weighed 262kg and she, 178kg.  The steer calf was his mother's third calf and the heifer the first from a smallish heifer.  The mother of the steer (#92) had a very poor first calf and has done well with the next two, so I will hope for the same record with the mother of this small heifer. 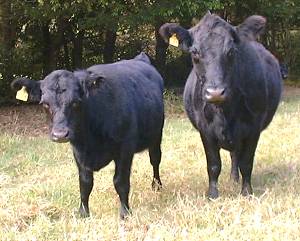 On the way in to the yards this morning, I kept looking at #426, thinking about why I'd included her in the number for sale and reconsidering that choice.  She is well grown, and comes from a family which appears to have some resistance to internal parasites, including Liver Fluke, so I left her and her mother standing at the last gate before the yards.

Here are the 24 calves, waiting for the truck to arrive.  The truck driver and I loaded them with a bit of bother - the first eight went up the loading ramp and onto the truck with such a clatter, that they all panicked!  By the time we put the third group of eight up the ramp, they were less than willing to go. 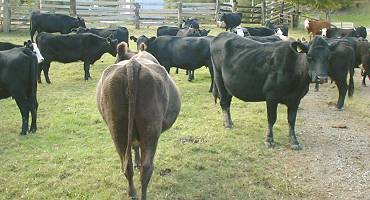 The truck went off with all those babies and their mothers stood around forlornly calling for them.  I left the lanes open for them to return to their paddock and also to come back down to the yards to hunt for the calves - I think they settle down more quickly if they are able to go back to where they last saw the calves.

Stephan, having started work earlier than usual this morning, came home in time for us to go to Kaikohe to the sale. 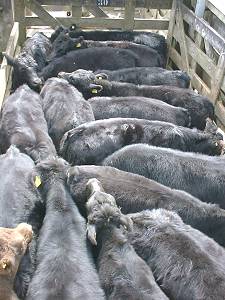 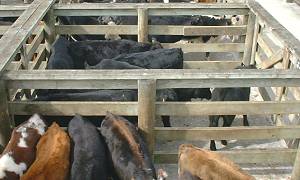 There were the heifers in their pen (directly above) and the steers in theirs.

Jill and Bruce met us at the sale, to see how it all worked, having never before attended any sort of cattle sale. 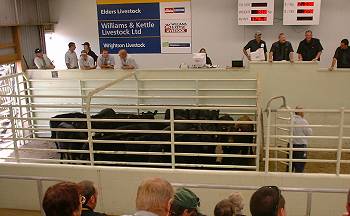 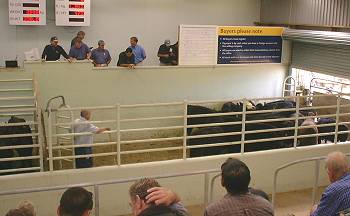 The sale was quite different from the one at Peria.  We were indoors for a start, sitting on padded seating!  The cattle came in from the left and were weighed in that pen.  Meanwhile, the previously weighed pen of cattle is standing in the right-hand pen on concrete, being auctioned.  During the auction, displayed on the left-hand board above were the pen number (from the pens in which the cattle were displayed outside in the yards), the number of cattle selling, their total and average weight.  As soon as the sale was complete, their information would appear on the right-hand display, showing the total per-head price and the price-per-kg for that sale.  The sold cattle would then quickly go out the gate to the right and either back to their pen in the yards, or straight onto a truck to go to their new homes.  Once I worked out what was happening it was an easy system to follow, but a little confusing to start with, since at some times there was information displayed on the left-hand board for cattle which had already left the right-hand pen but which were still being auctioned (the display on the right for the pen before that one), a pen of cattle whose information wasn't even up yet and a new lot in the weighing pen!
Pictured above are our steers on both sides.  The steers weighed an average of 230.0kg and the heifers 209.3kg which isn't too bad considering both lots had a very light smallest member and this season has been quite difficult in terms of grass growth.

I brought the two older bulls and the three bull calves and their mothers in to the yards this morning, in preparation for meeting a potential buyer of a couple of the calves (they would go when they're a bit bigger, just before next spring/summer when they'd be wanted for breeding as yearlings).  This contact came about because of the Women in Agribusiness fieldday here in February - I haven't advertised the bulls anywhere yet, since I've not previously had a surplus to sell.

This morning was misty and damp, so I didn't take the camera out walking with me.  I went to bring the young stock in from the back paddock and rearrange them a bit, but the biggest, oldest steer (again) wouldn't come down the hill and by the time I'd gone up to see what his problem was (nothing wrong at all!) the others had all walked up and around the paddock too and didn't come back down to the gate when I called.  By that time the sky was blue and clear and the sun was shining brilliantly, so I lay down on the grass and watched the trees and the tiny birds and thought calm things for a while.  Still no cattle appeared, so I left them there and walked home again, enjoying the sunshine and warmth.

Now that the majority of the cows are weaned from their calves, it's time for the four stud cows which had no calves, to rejoin the rest of the herd.  I brought them up to graze in the paddock next to the rest of the cows, so hopefully they'll do a bit of familiarisation before I put them together.  I'm not altogether sure, but I think some of the fighting and social order sorting can be avoided by letting them get a good look and smell of each other for a while before mixing them.