The first lamb of the season, to # 9 ewe. This sheep wasn't supposed to be in the lambing flock this year, but when the ram insisted on being put with the ewes, we forgot we'd meant to remove her.  Fortunately she has had one good sized ram lamb.  Of her twins last year, the ram was alright, but the ewe was a tiny thing with a black back leg and has since shown very poor growth rates. 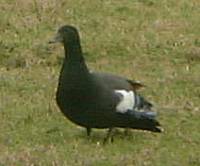 Ms Duck's dad, getting all aggressive, fluffing up his feathers and flicking his wings.  Ms Duck just stayed up on the roof and left him to it.  Presumably Mother Duck was off in the nest laying an egg, or perhaps even sitting on her eggs by now. 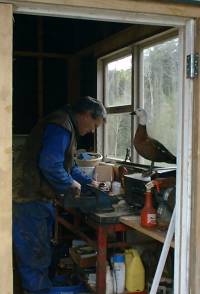 Stephan and his constant companion.  It has become apparent over the last few days, that our duck friend has a special affection for Stephan.  He simply can't go anywhere without her.  Here she stands on the spark shield on the grinder, after flying up from the floor, just to be nearer to him.

Hoping, perhaps, to make herself even more attractive, Ms Duck later donned a woolen scarf and wore it around the house for a while.  (Yes, you're right if you guessed she had help getting dressed.) 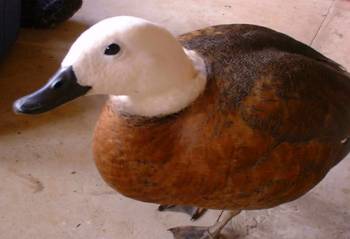 Isla is four years old today!  I didn't remember until I was out there talking to her, or at least trying to do so, and she was in a nasty mood, not wanting much contact at all.  Then suddenly I remembered the significance of the date and wondered if she was simply annoyed that I'd forgotten her birthday, or perhaps she was having some sort of life-crisis, facing her own advancing age.  She didn't want to discuss it with me, so I wished her Happy Birthday, attempted to kiss her nose, and left her to her ruminations.

Looking out from my kitchen window today, I watched #1 ewe having a lamb, so dashed out across the paddock to make sure all was well, which it was: one ewe lamb.  A few minutes later, back in the house and using the binoculars, I watched the second ewe lamb being born.

10.30pm tonight, Yvette gave birth to two little ram lambs.  Yvette was the mother of the "Inverse Face-lift" lamb last year, whose folded-in eyelids never came right.  I was pleased to see that although one eyelid was folded in tonight, I was able to flip it out and it remained corrected.

This morning it rained, beginning at about 5.30am and the river had flooded over our bridge by 9am. The five little lambs looked thoroughly miserable, and I watched them carefully during the day, particularly when they had to cross the streams of water which had suddenly appeared in the middle of their paddock. 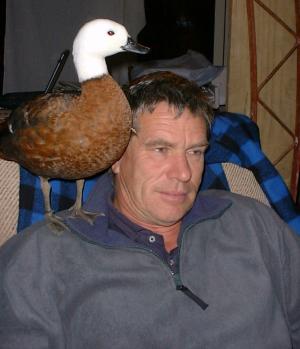 Stephan this evening, being courted by his admirer.  She may be feeling a bit frustrated with his possibly unsatisfactory responses and has taken to nipping him quite sharply.  Then again, maybe she thinks he'll enjoy it.

We were a little worried, at least Stephan was, when four more female Paradise Ducks turned up in our paddock.  I suspect they're Ms Duck's sisters and we feared that she'd been skiting about her new boyfriend and they'd all come to check him out too! 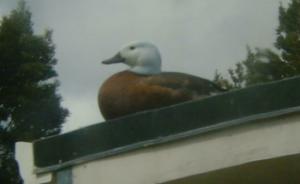 Seriously though, they've been flying around together today and spending a lot of time near the house.  At one point in the day, our duck was quite near them and didn't seem to be staging any territorial war.  I have heard it suggested that these birds actually don't mate in their first adult season.  The appearance of so many female birds together might support that (or maybe we have a lesbian duck troupe on our farm!!!)