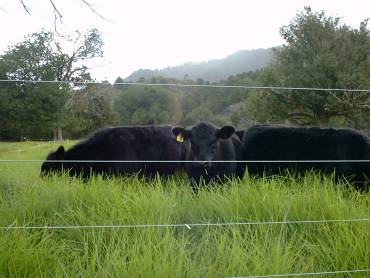 The weaned heifers are in clover - actually the clover is in amongst a lot of kikuyu.  I've been a bit nervous about losing this grass, as the temperatures dropped and frost became a possibility, so it is good to see it disappearing into the bodies of my small black friends.

Kikuyu grass grows like crazy in warm conditions, particularly after a good dollop of rain, and dies off very quickly when it's hit by frost.  All this lovely feed would have gone yellow, overnight, with a heavy frost.  However, the overnight temperatures haven't yet dropped much lower than about 7° Celsius.

The weather was warm enough, and the chicks now big enough, to spend some time outside.  I didn't want to have to watch them constantly, so I left them under their over-turned cat-cage, on the grass.

The Muscovy ducks were most interested in the new chicks.

I went "out the back" to move the young mob from one very large and bushy paddock to a better one for a few days.  Usually, if they're ready to move, they'll come to a call from me, often from some distance away.  The usual pattern in this particular paddock is to meet them at the bottom corner (they will have heard my approach to that end of the paddock) and call them to follow me around along the edge of the swamp at the bottom of the hill, then up through the trees to a gateway to the next paddock.  I love walking through the trees, with my large friends following closely behind.  Taking 50 cattle for a walk is a great thrill.

The cows, moving out of a paddock they've thoroughly chewed down.  I've been using this paddock, near the house, for the weaned calves and occasionally for Ivy (without her teeth), so it hasn't been well-grazed for some time.  Once the kikuyu grass is grazed to this level, the clover comes up through it in a great mat of lush leaves.

Winter and early spring are interesting times for managing cattle of different sorts on our farm:

Then we also have Ivy, who, without her teeth, needs extra care.  She's going to require some supplemental feeding over the winter, as the grass gets shorter.  Keeping her is an experimental venture, to see if we can get her successfully through a winter in good condition.  Under most farm management systems, an old, toothless, empty (not in calf) cow like Ivy, would have gone to the works already.  But she's such a good cow and having produced the twins last year, her average calf production per year is still very satisfactory.  If we can manage her reasonably easily through this winter, I'll get her in calf again this summer and tackle next winter in a similar way.

With Ivy are the two pregnant R3yr heifers who calved last year, whose condition I wish to keep a close eye on.  I'm "feeling my way" with the R2 heifer calving, working out how carefully those heifers need to be managed, so that calving them for the first time before their own physical maturity, doesn't take too great a toll on them over the longer term.

Late this evening, after we'd turned off all the lights, I spotted these two, in the light of the full moon... 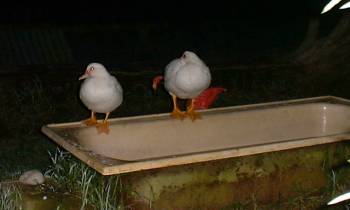 I very carefully opened the window to take a photo of these two still fast asleep, heads tucked away under their feathers.  But in the process, I disturbed another duck who was laying an egg in the garden and who then leapt up with a squawk, waking the Muscovy ducks.  We're going to move the bath in a couple of days, so they'll have to find somewhere else to spend their nights.