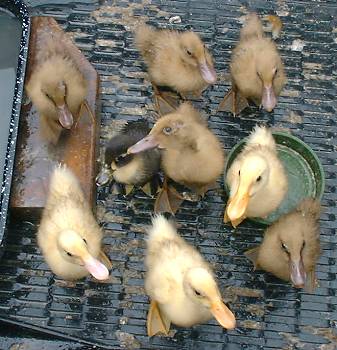 The ducklings, as ducklings do, are growing.  The one duckling I was expecting from an egg which one of the Muscovy Ducks was incubating, has hatched: the little dark duckling is the result. 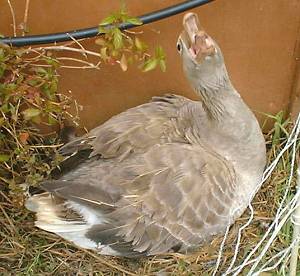 The goose is sitting on a nest again; in the garden again.  I keep forgetting she's there, until I suddenly hear her insane hissing, and if I approach her, she honks madly at me. 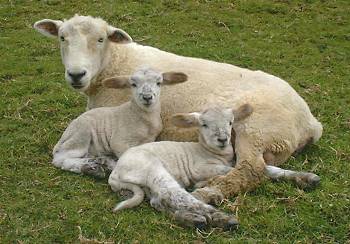 Little #26 and her two ram lambs, now three days old.  These lambs were the first we have had any difficulty with this year (other than having to assist a couple of ewes to actually give birth).  One of the lambs had obviously not had his first drink by the morning after his late-night birth; he was "tucked up" - looked very thin and hunched over.  The ewe wasn't very keen on feeding either lamb, but one persisted more than the other, which had obviously given up.

We caught the ewe and milked about 100mls of colostrum from her, which I rewarmed and fed to her lamb, after which he tried much harder to get another drink from her.  Later in the day, we milked another 200ml and I fed that to him in two lots and by the next day he was looking much better and both lambs were feeding normally. 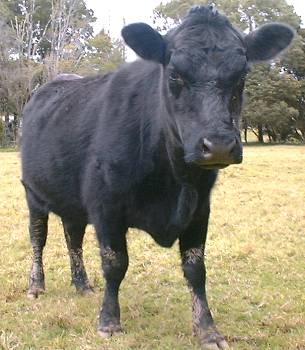 The 11th of September is always a lovely day, being the anniversary of the birth of Isla's first calf, Abigail.  Abigail is now three, so I took her a bouquet of Puriri leaves, which she promptly ate, and attempted to kiss her nose.  Cows aren't terribly cooperative with human nose-kissers, in my experience; one can get some nasty bruising in the attempt!  However, a birthday is a birthday and there are just some things which must be done.

The pigeons carelessly let one of their babies die, so I took the other one "under my wing" and have been attempting to keep it alive.  So far, so good. 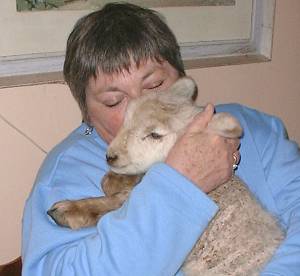 Meryl arrived this afternoon (attentive readers may recognise her from a similar pose with a famous and much-loved duck) on her way to stay with Jill and Bruce who were here for the day.  I ducked outside and pounced upon an unsuspecting lamb, so she could have some woolly cuddles. 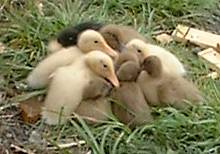 I've been letting the little ducklings wander around outside a bit, so they can supplement their diet with worms, slugs, insects, and a bit of grass.  The air chilled a little this afternoon and so they all sat down almost on top of each other. 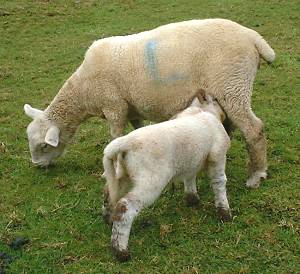 Little Lambie, for all that she seems to continually lose track of her lamb, is evidently doing a good job of raising him: he's very nicely rounded! 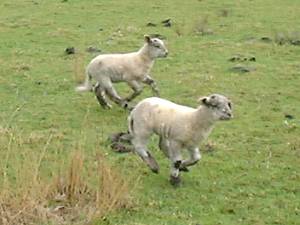 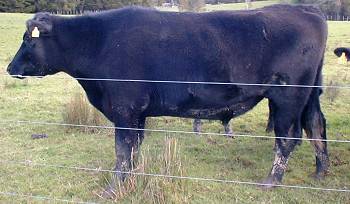 Steer 356 just keeps piling on the beef - not in a really bulgy sort of way, but stroking his back, I can really feel the increase in cover over his bones.  As soon as we have a bit of fine weather, I'll weigh him for his drench, and see how he's really doing.

I watched this cow as I walked around the edge of the swamp checking her paddock-mates; she'd take a step and her foot would obviously go through the matted grasses and roots at the base of the swamp, so she had nothing firm to stand on.  This is the sort of situation which, in years past, might have caught such a cow because she was too weak to make her way back to firm ground.  When our cows had liver-fluke and we didn't realise that, the systemic stress and anaemia weakened them so much that if they fell down in a sticky spot, they really couldn't get up again.  It's good to watch them now, even though they're due for a drench to knock out their current Liver-fluke burdens, able to hold their own in these sorts of places.