Look!  Boots, not plastic bags!  What a relief, although it still hurts to walk, since my ankles are pathetically weak.  Sebastian and I travelled on the back of the tractor to move the cattle with Stephan. 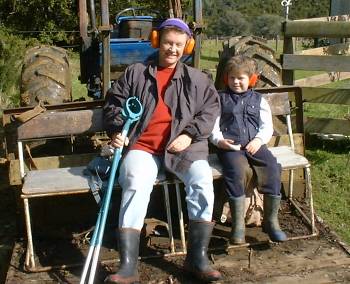 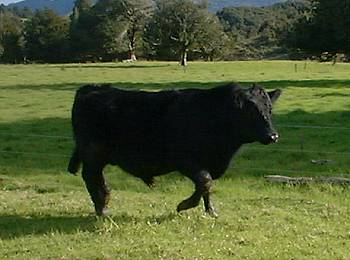 Here's young Crispin, now over a year old, growing fast and looking more solid every week.  He'll get a chance to show his real form this year with some of the cows.  His little half-brother doesn't look anywhere near as good an animal.  We'll probably just grow him to a good size and send him away to become someone's protein filled meals.  Just because you have a fine pedigree, doesn't guarantee a long and event-filled life!

We have a ewe with fly-strike!  How extraordinary for this time of the year.  I would have thought it was very much too cold for many flies to be around, let alone breeding on the back of my sheep.  The ewe concerned has been struck a couple of times before and we'd seriously considered getting rid of her.  The area the flies have colonised again is the same as the previous strike, which suggests that her skin may have been infected since that time, attracting the flies to the same place. 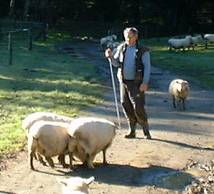 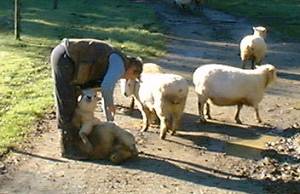 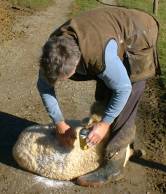 Here holding his crook, Stephan waits to pounce on the ewe as she comes close to eat some maize, then turns her over and applies the powder to kill the maggots and discourage any more flies from landing and laying more eggs.

Sebastian was a great help, having led the sheep in with the maize bucket, he coped quite well with being mobbed by Yvette and Babette, who are two of the most insistent maize eaters.  Then he helped take them back to their paddock. 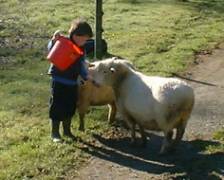 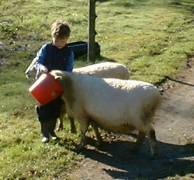 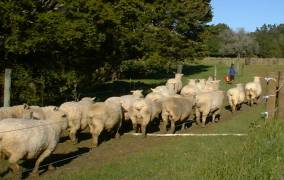 Later in the day, Grant visited to ask if we'd help him walk his three heifers down the road for a couple of miles (about 3.5km), from his place where there's no longer any grass for them to eat, to a paddock he'd arranged to use, at the bottom of the valley.

I drove slowly ahead with flasing hazard lights on the ute and Stephan, Grant and Sebastian (for a while) walked behind the cattle, keeping them out of other people's driveways and keeping them moving along the road.  It took us about an hour and a half, just going as fast as the animals wanted to walk.
We considered the possibility of Grant using some of our pasture for his animals, but decided that we'd be pretty pinched for feed anyway, so that would not be wise.

The Muscovy Drake is going through a problematic adolescent phase - at least I really hope it's just a phase!  This afternoon we found some peacock tail feathers on the driveway, which was rather odd, since the peacock is still in the process of growing them, not moulting.  A couple of hours later, Stephan pulled the drake off the top of the poor bedraggled peacock and brought him back down to the house. 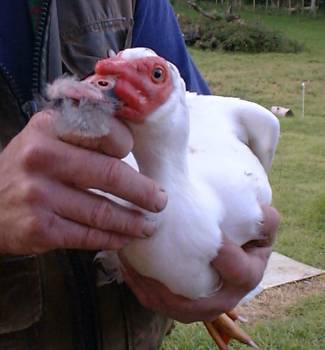 Sebastian's grandmother bought an air-ticket for his trip home, so we packed everything up and headed for the airport, about 20 minutes drive away.  The plane which flies the Kaitaia to Auckland route, is a little 12 or 14 seater, with only the pilot and co-pilot as crew (i.e. no nice steward people to look after a small boy), so I wasn't sure that the planned flight would definitely go ahead.  However, the pilots were happy to carry him and he was quite calm about going on his own, so we signed all the relevant forms for sending an "unaccompanied minor" and sent him away. 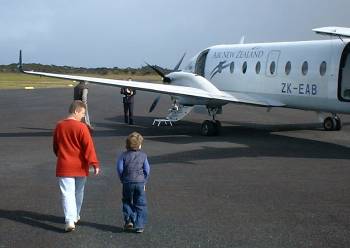 We were asked to take him out to the plane and buckle him in safely, which I then did.

We had talked about putting a big "X" in the paddock near the house (using sheets or curtains) so he could see the farm as he flew over, but the weather was windy and wet and there were too many clouds about to guarantee that he'd see anything on the ground at the right time.