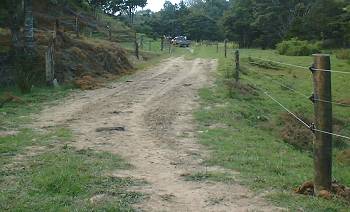 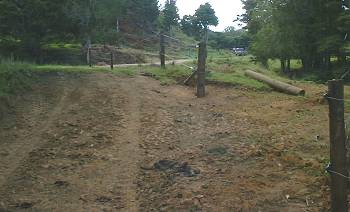 Stephan's been busy again, extending the lane to the back of the northern side of the farm.  It doesn't take him long to make some major changes, once he gets going! 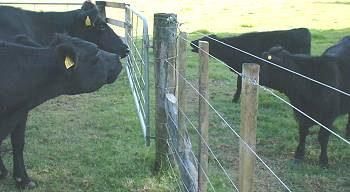 Still yelling at each other through the fence: the weaning cows and calves.  The calves are getting quite hoarse, so are able to make much less noise now - although that doesn't stop them from trying!  They'll recover again in a few days when they've rested their voices a bit. 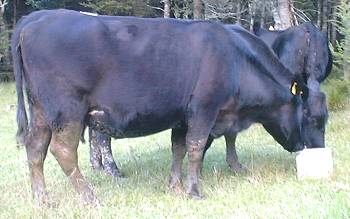 At this time of the year, when the Kikuyu grass is growing at its fastest, the cows really appreciate access to some salt!  Kikuyu doesn't take up much sodium from the soil, and we've no sea-spray here, and growth-rates have been proven to be much improved when cattle have the salt they need.

I took three new blocks out to various mobs this evening, much to the delight of the cows. 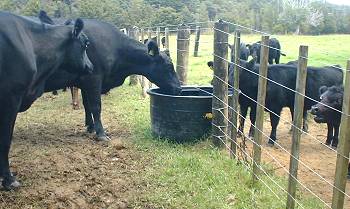 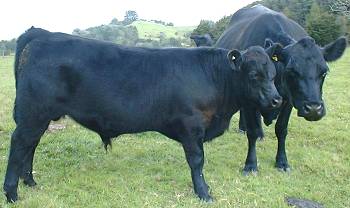 The cows and calves are spending less time at the fence, but the cows regularly come back to check that the calves are still alright.
At right above, Isla with Virago Aidan 27 AB.  He has the solidity of last year's calf, Arran 20, but his back legs are structurally better from behind.  I would keep him and sell Arran, but that would mean having only two unproved yearling bulls for mating next season (Quadrille will be gone by then).  I plan to keep #26, Irene's son, rather than another of Isla's calves, since Isla's family is so well represented in the herd and I need an unrelated bull in case I need to use him for a back-up to my insemination programme.  My success rate with insemination is so good that I don't generally have to follow up with a bull, but one never knows when some disaster might occur with a semen storage bank, for example, leaving me no choice but to use the fresh alternative.

The cows are much quieter this morning and I've now shut them out of the lane where they were meeting up with their calves through the fence.  This mob are now officially on clean-up duties.  Because they're no longer required to produce lots of milk, I reduced their feed as soon as I took their calves away and now they will graze the paddocks which the younger animals have already been through, taking the Kikuyu, in particular, down to a low level, which provides a very necessary service in pasture maintenance each year. 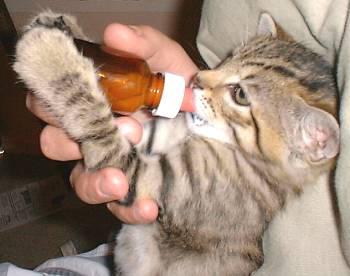 Time for a kitten update?  Spice now weighs just under 1kg, (from her 340g start four weeks ago).  Her eyes appear to have completed their colour change, to a beautiful (that's lucky, isn't it?) yellow-brown.  She's still having a morning and evening bottle feed, which supplements the dry food to which she also has constant access (except when we have to keep it out of the reach of FAT Foxton).  The bottle-holding during feeding is a new development.  She goes into a very fierce-looking trance while feeding.

I spent a few days out of action after somebody took to me with a scalpel.  Always pay attention when there are serious-looking people in white coats around - lose your concentration for a moment and they'll have you!