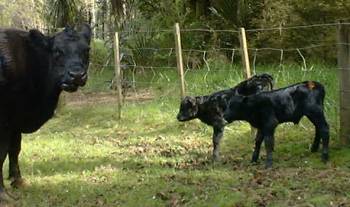 After they spent the night in a corner at the bottom of the cattle yards, Ivy and her girls ventured out into the wider world.  They then spent the whole day in this corner, until I convinced Ivy it was time to get back to some grass. 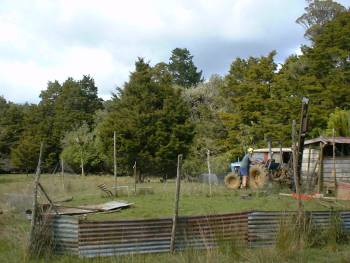 Stephan, meanwhile, got into the terribly untidy and falling-down chicken pens, and began to reinstate the main enclosure.  We use a lot of manuka (tea-tree) poles as fencepoles in such places, but after a few months they rot at ground-level and it takes only a small itching nudge by a cow or sheep to bring the whole lot crashing down.
The corrugated iron in this picture is unsightly, but very useful for creating chicken-proof areas, since if they can't see through something, they seem less intent on pushing through or under it.  The chickens spend most of their time free-ranging around this whole paddock, of probably nearly an acre, but from time to time we enclose them in the large pen, to ensure that they're not 'laying out' in their own secret nests.

Grant came for his 'prize' dinner, since he was effectively the winner of the Isla Sweepstake 2002.  Stephan cooked a lovely tomato soup, a beef roast with all the trimmings and then we had his famous cheesecake and two flavours of ice-cream for dessert.  We told Grant he had won 'dinner for two' but that he had to bring me as his guest.  Then we kindly let Stephan join us.
I forgot to take photographs. 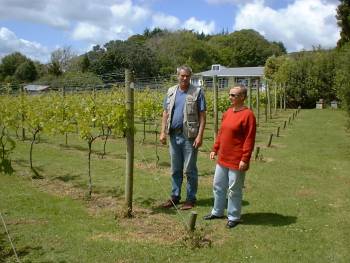 Sometimes we actually go out.  Today we went to one of those vinyards where you can look at the vine and say "I think I would like a bottle of that" and in a few months, the kindly winemaker will present you with the bottle.  It's one of those fine services one can find in the Far North.  We're a friendly lot.

Lots more hen eggs tonight.  I wonder where they've been putting them on the days they were out and about?
We'll probably keep them in for several days, until we think they've become used to laying where we can find the eggs again. 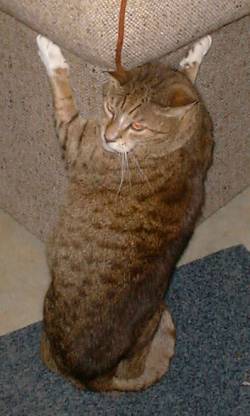 Here is evidence of the danger of allowing cats of a fierce nature, unfettered access to catnip!
This evening, when doing a spot of casual weeding in my small flowery garden, I noticed the catnip plant was beginning its usual spring expansion over the whole area.  I pulled some out and threw some of the leaves in the window for the cats.
Cattin has always gone nuts on the stuff, but perhaps he had a bit too much tonight!  It's not safe to walk around near him in this state, and I've painfully learnt NEVER, NEVER touch him when he's "high". 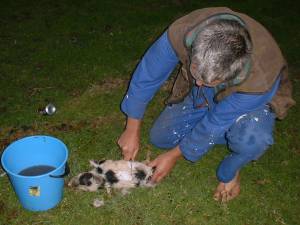 Meanwhile, Stephan was outside taking care of what might have turned into dinner for two.  While out walking late this afternoon, we came upon the last of the family of wild piglets (whose relatives have all been recently shot), nosing around under a tree.  They were quickly dispatched and we brought one back to 'process' for a casserole.  However, considering the size of the feed we'd have got from this tiny beast and the difficulty he was having getting it de-haired, Stephan decided he had better things to do.  He'd already dealt with a rabbit which we gave to Jane next door for her dinner.

Another in my series of Bird Closeups: a Starling, confused and battering at an upstairs window, narrowly avoiding the attentions of LC cat, was soon struggling against my hand as I posed it for this photograph. 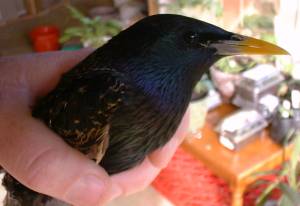 We spent some of today planning, and then beginning, a renovation of our farm entrance.  Actually that meant that I climbed the hill opposite, with paper and pencil and camera, and Stephan got on the tractor with the fencing gear and constructed what we'd planned.
I'd like to get a picture of the finished scene before providing the 'before' and 'after' photos.  I'm also debating disclosing the new look, in case we're suddenly flooded with visitors from all over the country and world, who'll be able to recognise where we are, as they travel up our road!

Here are my lovely girls, whose names will be Ingrid and Ida.  They continue to look less and less alike, every day. 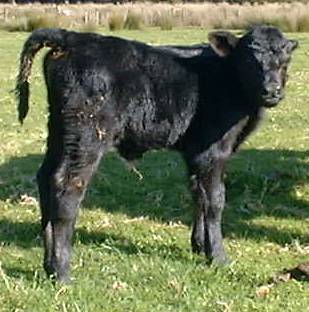 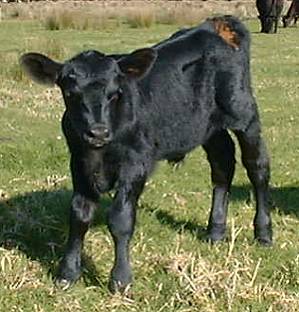 Ida has been particularly slow in getting going but has now worked out how to find her mum and get a good feed.  I suppose that's the problem with twins - if mother is feeding a calf, she's not particularly likely to go hunting for the other one, even though she may be well aware that it is her calf, when it's within sight or hearing distance.  I kept seeing Ingrid feeding and then I'd find Ida asleep in the rushes.  I rescued her from a dark and lonely walk around the paddock in the middle of one night, when she'd finally got hungry enough to go looking for Ivy, making sure she found her warming 'night-cap'.