Back to school this week, which for me meant hours and hours of preparation during the weekend and then longish days at school during the week.  Thus there wasn't a lot of farm work done and no pictures taken.  I thought that I would instead, do a bit of catching up on a couple of unfinished stories from earlier pages.

The Paradise Ducks have gone away.  This was the last time I saw them, early on the first day of March when out checking the Autumn calving cows... 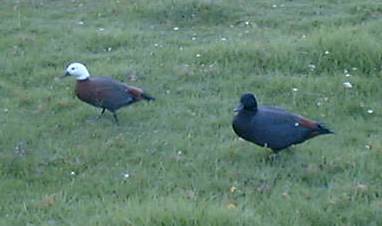 There have been large numbers of ducks around and I suspect our two were amonst them on occasion, but since they look like any other paradise ducks, it is not possible to identify them unless they land near us and are obviously tame.  I hope they survive the upcoming duck shooting season, but we may never know.

The Autumn calves are all looking pretty good, especially the older ones, who are now around six weeks old.  The first one born, #19's heifer calf, is a great bulky thing.  We've weighed them all at least once, but not yet vaccinated or ear-tagged them, since the youngest ones are still so small.