You may recall, if you've been hanging around this site for longer than you ought, that several months ago I was getting about the place on a fine pair of crutches, while my legs were encased in blue fibreglass boots.  I am less than delighted to report that the problem that stint in plaster was attempting to rectify, remains with me, which is why I spend far more time sitting at my computer than any able-bodied person might wish to do.  Sore feet are a pain!

A couple of weeks ago I received a letter summoning me to the middle of Auckland City to have a scan conducted upon my feet, so I bravely booked a return air trip - that being as cheap an option as borrowing someone's car and driving myself there, or even taking the bus, which takes absolutely hours!

The biggest delight of a flight out of Kaitaia is flying over the farm.  The afternoon was reasonably clear and I was able to inspect Stephan's gorse-clearing work, visible as a couple of brown patches at the back of the farm, since I'd not managed to get out there to have a look before I left.  I managed to get a few fairly clear photographs this time, although they're always somewhat affected by being taken through two layers of perspex window!

The yellow lines show the boundary (rather more angled than it would look either from directly above, or on the maps), the green lines indicate our two pieces of "conservation" bush, the blue shows the approximate route of the rivers, and "X" marks the area where the steer (#356) was stuck in the hole, with the new track marked in light grey, then joining the rest of the track in light yellow, which makes its way to the front of the farm.  Directly above the "X" is some grass which is in the 'Middle Back' paddock, the lovely warm hillside where I often take pictures of cows sitting around enjoying the sunshine. 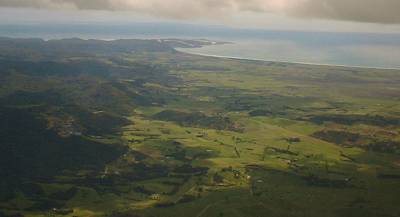 I also caught this view of Ahipara and the bottom end of Te Oneroa a Tohe (Ninety-mile Beach).  I've always loved maps, so being able to see what a map represents in all its real detail, is such a thrill!

Auckland is a place I used to enjoy on some levels, and in which I had some fun and happy times in my life, but I am extremely relieved not to have to spend a lot of my time there any more!  Since I left there 8½ years ago, the population has increased significantly, creating a huge increase in road traffic and pollution levels, which would make some of the things I used to enjoy, much less possible.  Cycling was my preferred method of getting around at some times, partly because it kept me fit and also because one could often get to one's destination as quickly by bicycle as by bus or car, since the traffic congestion even then was quite high.  Auckland has a number of lovely beaches, at many of which one could swim, which I rather enjoyed doing during some lunch-times in the summer - cycling as fast as I could to the waterfront, swimming, having a bit of lunch, then drying off on my way back to work.  I was a telecommunications technician, so didn't have to be terribly smartly dressed and a swimsuit could easily be worn under a dust-coat!

Home again to a sad week, during which a very nice friend died.  Richard worked at Kaitaia College, which was where I had most contact with him, and was a generous and supportive person, much loved by a huge number of people - evidenced by the number who visited the hospital to take their leave of him before he died.

While dressing the steer's wound, I discovered the reason for his frantic foot-waving over the last few days - his uninjured side's foot is infected!  This discovery was very depressing, since the progress of the large side wound has slowed and we just don't seem to be getting anywhere at all and now here's another difficulty to contend with.  I rang the vet, thinking that we're getting awfully close to this animal costing us more in actual dollars spent than we'll ever recoup, and was advised that Penicillin is very useful in foot infections and so Stephan and I added an injection to the steer's evening routine.

I'm not sure what has happened to the foot, whether the steer has stepped on something sharp, suffered a stone-bruise which has then become infected, or whether perhaps the constant weight-bearing over so many weeks as he no doubt kept his weight off the other side, has caused some collapse of the hoof. 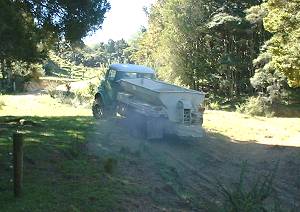 Don brought the second half our our fertilizer order out and spread it.  We've had a small amount of rain since the first half went on, so the stock have all moved to those paddocks while the rest are done.