Last year I joined a Women in Farming discussion group which has recently been renamed Women in Agribusiness and meets every couple of months around northland.  Late last year when we were casting around for ideas for upcoming meetings, I suggested that a day on cattle selection and breeding would be really beneficial and also volunteered my herd and farm for the purpose.

Tomorrow is the day and this afternoon we went to the airport to pick up our guest for the night and tomorrow's speaker, Russell Priest, who is the National Beef Genetics Coordinator for Meat and Wool Innovation, the national body to which my meat levies are paid.

Russell's extra time with us was a real bonus for me!  We went out and walked around amongst the cattle, all of which I'd brought onto the flats for easy access, and he showed me how and where to look at the body structure and shape for the faults one ought to avoid and the features one would want to breed into one's cattle.  I was greatly relieved to be assured that my instinct for what is correct has been a reliable guide over the few years since I started breeding cattle.

About 30 women turned up for the fielday, and we began with Russell's presentation on Bull Selection and breeding soundness and then had a short session on EBVs (Estimated Breeding Values), how they are derived and how they may be used in a breeding programme. 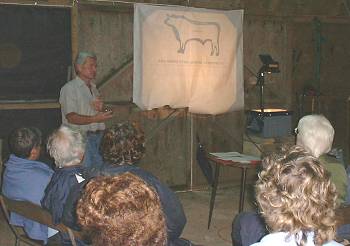 After lunch we all gathered at the yards and Russell talked us through the theory of the morning with reference to some real animals, the first (pictured below) being Quadrille, my elder bull.  Because we'd previously taken the barn down from this area, we had some nice smooth concrete on which to walk the animals, something I've never done with this bull, so I was delighted to see how good his foot structure appeared on concrete.

I found it very interesting that when Russell asked the group "what's right and wrong with this animal?" the first thing someone said was that he was too small.  He is only around 820kg which isn't huge for a bull, but is ideal for my self-replacing breeding herd, wherein I'm trying to breed efficient cows to breed more animals.  And, as Russell then said "his EBVs aren't small" which is what indicates how his progeny will actually perform.

Quadrille is an interesting animal in that his EBV pattern is that of a "curve bender", because his birthweight is lower than average, his growth figures slightly higher than average and then his 'mature cow weight' figure (how heavy his daughters will be at maturity) is quite low.  Birthweight, growth rates, and mature size are normally quite closely linked, so the number of animals which actually break that association is not very great.  I had chosen his sire for use with Queenly 486 to achieve just such an EBV profile, and it was a great delight to have a visitor who recognised the importance of that.

We finished the day and everyone went off home.  Russell went off with Shelley, the group's coordinator, to stay in Whangarei for the night before repeating the day tomorrow for a southern-northland group. 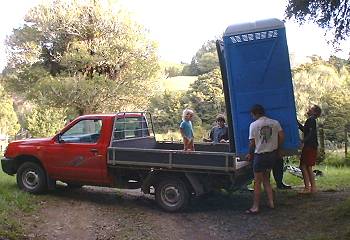 Stephan, Graham and Neil very carefully (to avoid any chance of spillage!) lifted the hired portable toilet onto the back of the ute so Stephan could take it back to town first thing in the morning.

I must express my gratitude to the three businesses whom I approached to help us fund the hire fees for the toilet and the tea urns for the day (the "Teas and Wees"): Mangonui Haulage who willingly sent me cash; Far North Hire who reduced the hire-fees considerably; and Wrightson Kaitaia who also handed me cash for the day!  Thank you Darren, Jason and Lenny.

While moving some of the cattle this afternoon, I spent some time looking carefully at their structural makeup in light of what Russell Priest had presented to the group on Monday, and also with reference to some of the comments he made about particular animals during our walk amongst them on Sunday evening.  I took lots of photographs of them for later reference too, as I usually do at around this time of the year, prior to weaning and selling many of the calves.

This is 99 and her heifer calf 421.  99 was one of the calves from my second year of breeding, a daughter of Albert, our first Angus bull and 14, a Hereford cross cow who is still here because she has always produced very good calves.  99 also does a good job with her offspring.

Tomorrow is the North Hokianga A & P Show at Broadwood.  Stephan and I had arranged to meet Jill and Bruce there, and Erika decided that she would take the bus, the children and me to Broadwood this evening.  Stephan and Graham had arranged to go to a film festival horror movie at the Swamp Palace, the only picture theatre in the district, which has an annual festival at this time of the year.

First we had to attend to a necessity: emptying the effluent tank in the bus! 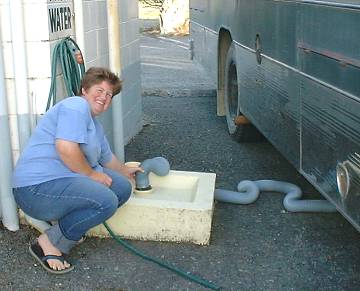 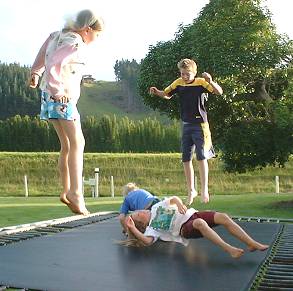 Meanwhile the children had all run off in the other direction to an obviously favourite activity at this location.