Finally, our last lambs were born.  We've unusually had no deaths at all during lambing and have reached 175% (28 lambs) from the 16 ewes who went to the ram in March.  (I'm not counting the one ewe who mysteriously disappeared a while ago, since her presumed death was probably not lambing related.  Abducted, perhaps, by aliens believing hers to be the most intelligent species on earth?) 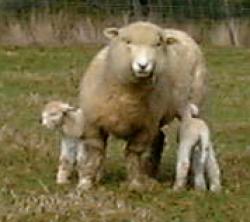 Along with our rat infested house and garden, we have rats living with the chickens, evidenced by huge excavations underneath the various hen houses and cages.  Now after several days of serious poison-laying I've started finding the occasional dead rat.  This one beats all the others for size! 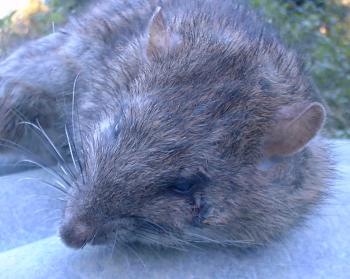 It's almost pussy-cat-like, don't you think?  Quite cute and fluffy - if you forget it's a rat.

This guy lives there too, but I'm never there at the right time to catch this fabulous display in bright sunlight. 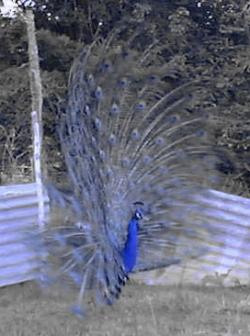 In the evenings all the lamb-babies go mad and run around racing each other, sometimes in groups of a dozen or more.  One will run away from another which will then see the race is on and then more and more are gathered into the fun.

It's fun having the occasional differently marked calf amongst all the wholly black ones.  This heifer's mum is a Hereford/Friesian cross, so she's big and black with a white face.  She is also horned, which this calf will not be, having an Angus (naturally polled) father.  The bull I used is the one who sired all of last year's stud calves.  I thought he might go quite nicely with the shape and size of this cow, potentially giving me a great calf. 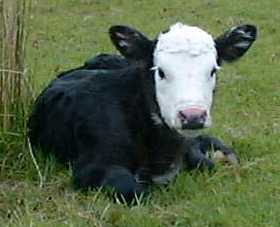 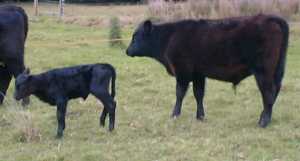 Here is Crispin with one of the brand new calves.  All that milk powder and care produced this much growth! 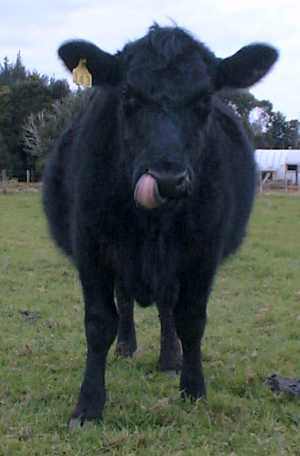 Yum!  Cows do this a lot.  I suppose it's handy if you don't have a handkerchief.
This is #343, pregnant and waiting. 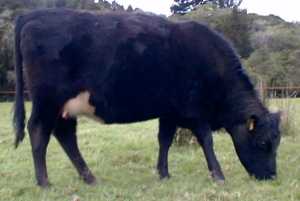 This is #349, a two-year old heifer who calved today, soon after this photo was taken.  In the past we've generally calved the heifers as three-year-olds, but a few of the young ones had reached good weights last summer, so we thought we'd carefully experiment with calving them early.  Many stud and commercial farmers calve all their heifers at this age, so it's something with which I'm interested in experimenting.

#349 had a lovely wee heifer, which promptly fell into the drain, since her inexperienced mum had decided to birth her there.  Fortunately that wet start happened only a short time before I went out for a walk to check on the cows, so although rather cold, the calf was fine.