Here are the Muscovy ducklings.  They're much bigger than their little black feathery mother now, but still spend a lot of time with her, even though she's started laying eggs again and isn't so worried about them. 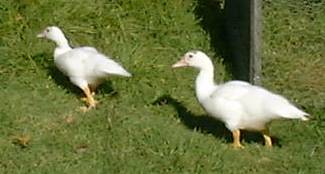 The cattle had been making quite a noise from out the back, so we went to check them, to make sure there was nothing actually wrong.  Lots of them were hanging around in the front corner of the paddock. 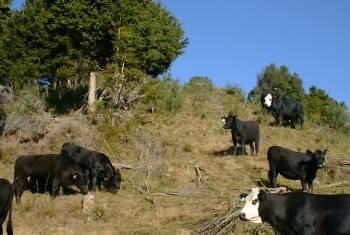 Lots of the others gradually made their way in from further out. 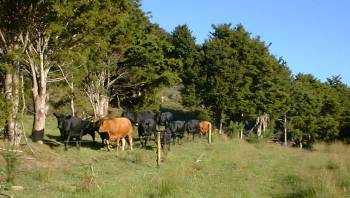 I checked the 'roll' and discovered we were missing a few animals, so off we went, the three of us, Stephan, Ruth and Duck.
Ms duck followed us all the way to the back paddock, walking through under the scrubby bush and across the swampy bits - flying every now and then for very short bursts, where she could. 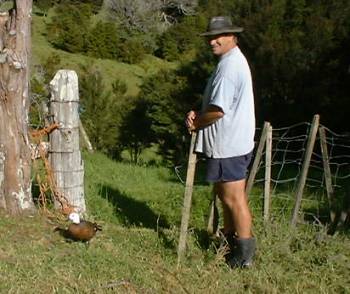 From the top of the hill she took off for a bit of a circle around the valley and back to us again.  Then it was all the way down the hill again to check that the missing animals had gone down to the gate. 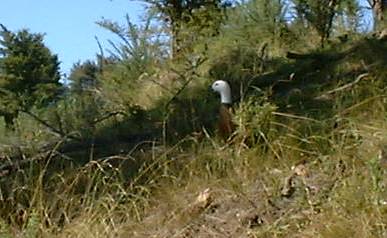 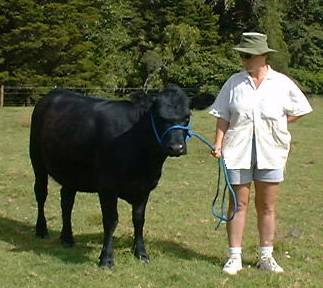 Abigail and Ruth in training 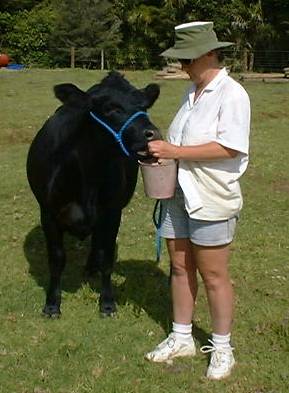 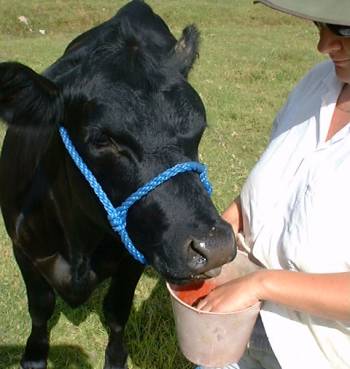 Because of the risk of fly-strike in the sheep, they need to be checked regularly.  I hadn't been out for a couple of days to specifically look at this mob, so off we went for a walk.

Damian was off on his own...

... so we had to go and check he was alright.  I think he's just getting a bit old.  He's now 6½ years old, which is not ancient, but it's not surprising he's beginning to slow down a bit.  Wethers tend to get quite fat, since they have no work to do, but just carry on eating, which must take a toll on their feet and bodily systems.

What are you doing in my bath? 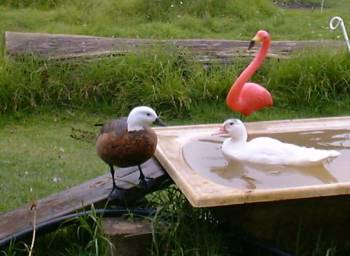 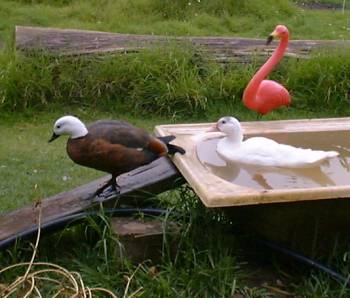 We continue to have some startling sunsets.  There's still quite a bit of smoke in the air at times. 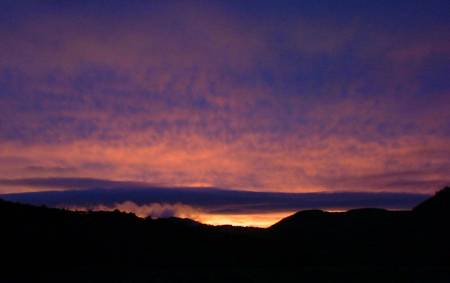 Photographs never quite do justice to the beauty of the moment, but I thought I'd give it a try.

I went to the first Northland Women in Farming discussion group meeting.  We discussed mostly what we'd like to get out of such a group and decided upon the membership of a five person committee to organise the meetings in the future.  I'm on it.  If you want to know anything about it, or if you're a Northland woman farmer who wants to join in, let me know. 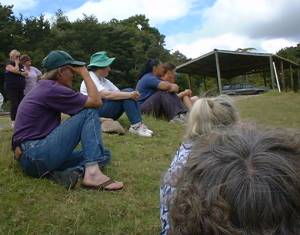 After lunch we listened to and watched a dog-trialist who gave us some good information about training working dogs.
It was a good day and I met up with lots of women I've seen at other farm education days as well as many new women.  There were about 30 of us in all.  I'm looking forward to the group really getting going, since farming is a pretty isolated sort of job and women in farming face particular challenges (as do women in most jobs traditionally done by men) in getting information and peer support.

This evening we went into town with our (and our neighbour Jane's) entries for the A&P show indoor section.  Entries close at 7pm every year on the Thursday before the show, which seems a bit silly since the show has really become a one day (Saturday) event.  We're usually there about five minutes before closing time!
We arranged to meet Grant there... 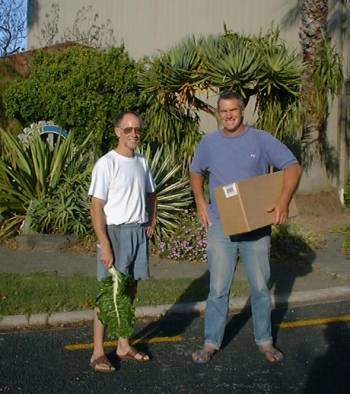 Inside, while we were waiting to submit our entries, our lovely neighbours arrived with all their baking and crafts and we met some friends not seen for a long time. 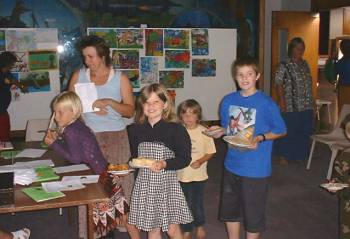 I went through a cycle of panic, disappointment, resignation and then renewed hope this afternoon, when I discovered that Abigail, rather than being able to pay the equivalent of a bus fare to go to town, would have to pay for her own taxi, since the truck which took her and the others in last year, was already pretty busy and full, taking someone else's animals to the show.  I didn't feel I could really justify the expense, especially since it seemed likely she'd get to the show with less time to spare than I would like and would probably have to go home again quite early.
However, this evening we have towed home a horse float, ready to be practised with tomorrow.  Thank you, Nelia!

Stephan and Grant have spent most of this afternoon setting up the Small Animals section of the A&P show at the show-grounds in Kaitaia.  I've been sorting chickens and catching any we didn't catch last night.

I also had to get Abigail sorted out with the horse float.  I put the halter on her and led her down the driveway to where I'd earlier parked the float and then led her to the ramp and encouraged her up it.  She was pretty unhappy about the noise of her feet on the ramp.  I kept up a bit of pressure on her halter (she often requires that to move even on flat ground!) and enticed her with a container of molasses and she gradually walked up and then into the float.
We went out (rather quickly) and walked around a bit and then tried it again.  The pictures below are from the third and final time. 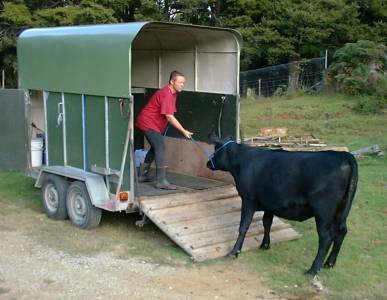 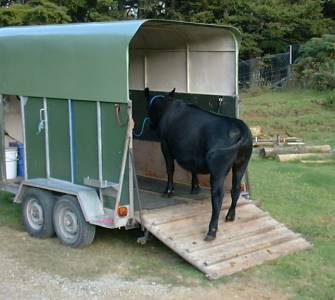 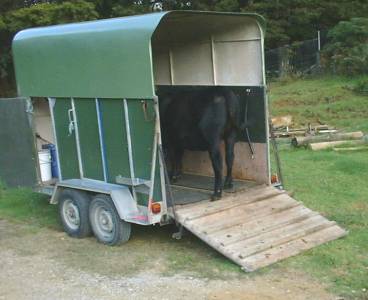 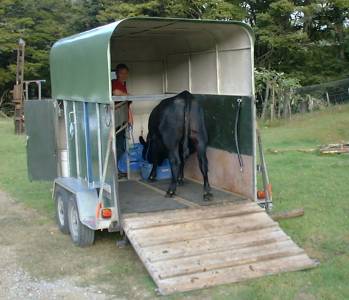 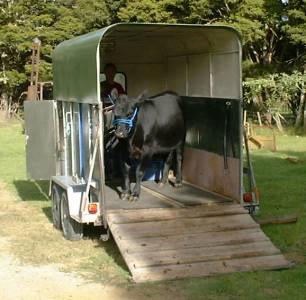 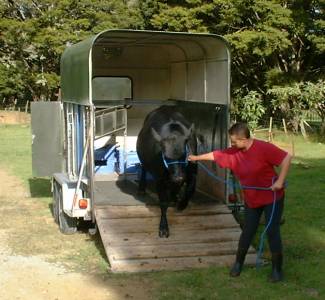 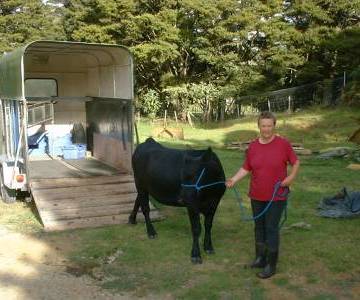 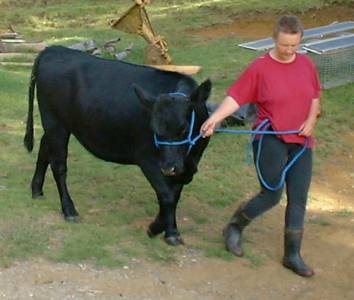 Then I tied her up again and washed her down all ready for tomorrow.  She was pretty sick of my attentions by the time we were finished with all that, but she led like a dream afterwards.  She's a stroppy, strong-willed creature, but with a bit of discipline and some time spent doing what I want her to, instead of pleasing herself, she turns into a fairly cooperative creature.  I just hope she continues in that manner tomorrow!