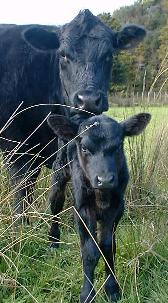 This wee girl is so cute I simply have to keep taking photographs of her.
Isla and her calf again. 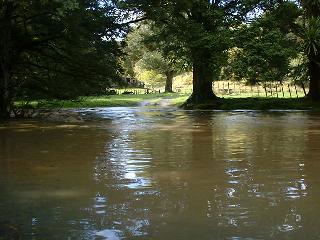 AND NOW FOR SOMETHING COMPLETELY DIFFERENT... from the extreme to the absurd...

This could be the new 'Ugly Duckling' except it's the 'Ugly Lamb'... 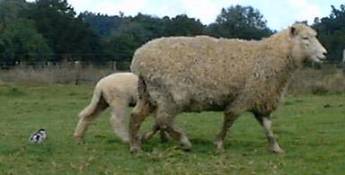 Are ewe my mother? 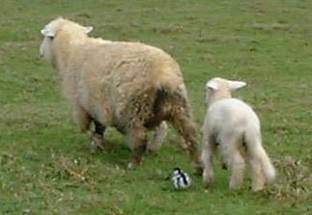 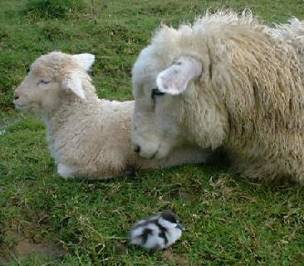 At last, a family of my own, one that will accept my differences!

However, it was our view that a small two legged not-lamb probably wouldn't do awfully well in such a family, not being able to reach the teats of its new mother and at night, snuggling into the side of a sheep, who just might roll over and inadvertently squash her strange new child, would make survival rather doubtful.  Then, having picked this one up, we heard another very distinctive cheeping from the river (which was still quite high from the morning's flood) and there discovered another lone duckling, who swam readily in our direction, having heard its sibling.  Both were a bit cold and we couldn't see any others anywhere, although I suspected they were the offspring of the ducks we've been watching out on the flats recently. 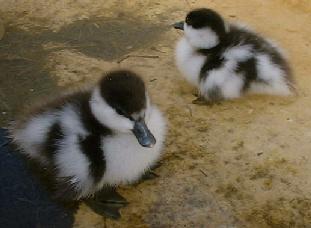 We brought them home and while thinking of what to do next, popped them into the most secure baby pen available for a few minutes; the bath (the outside one that is; you think if we had an inside bath it would look like this?). 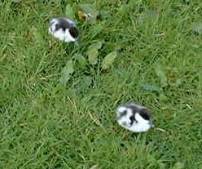 Then, bearing in mind the hassles of raising orphaned ducks, I decided to try to return them to the vicinity of their parents.  So I took them out across the paddock to the tree I'd seen the hen-duck fly into and popped them under the fence.  Then as I walked away...

...along in front of the house and in through the back door!

Having been struck down with the dreadful lurgi for several days, there've not been many photo calls.  My constant companions have been the new babies, cruising around cleaning up whatever bugs they can find on the floor of the house and dicing with death, in the form of huge feet.

Oh, and presumably, under normal circumstances, this might be rather risky! 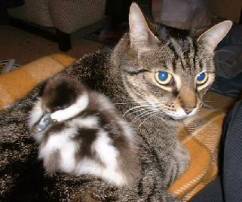 While out taking a gentle 'constitutional', we discovered the rest of the family, who are regularly ranging across the flats.  Surprisingly, there are still as many as on the first day we saw them.  It seems they retreat to a pond or large puddle whenever they see us coming and sit in the middle, quite quietly.  Their mother flew in on a couple of occasions and they all dived under the water and didn't reappear for several seconds.  Presumably that's how they avoid hawk attacks.  When they're out feeding on the grass, both parents are with them, the ducklings seeming to lead the way with the parents following, maintaining constant guard. 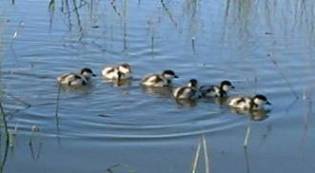