I finally made the trek home from the big, smelly, crowded city, feeling more and more content, the further north I travelled.  About half an hour from home, is the Maungataniwha Range, over which one travels through the Mangamuka Gorge, which, strictly speaking isn't a gorge at all, since it's actually a very windy and fairly steep road over the hills.  It does follow the river for some distance on the south side of the hills and is really very beautiful.
I was delighted to see that the Northern Rata had begun to flower, so attempted to find a good spot to get a photograph.  This is as good as it got... 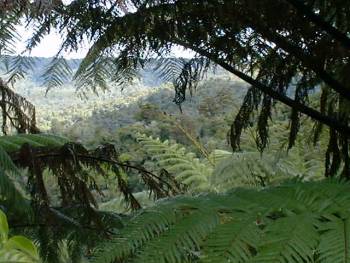 ... i.e. not very good at all.  There is a Rata in there, which sort of shows as a bit of extra red blur in the middle of the picture.  I will endeavour to get a picture of the Rata trees on the farm, when they flower (if the opossums haven't eaten all the buds) and provide a bit more information in the Trees page.... soon.

A lot of people loathe the gorge and some go to great lengths (and distances on other roads) to avoid it.  Since living in this part of northland, I've come to know it quite well and really enjoy the drive.  Every time I travel through, and the more I become familiar with the bush around me, the more Kauri trees (the forest giants) I see.  I had no idea there were still so many in that area.  Unfortunately the nature of the road - and the great drops down at the edges - made it difficult to stop and get pictures of the trees for display here.

Having been struck down by some unpleasant bug picked up in Auckland, I've been a bit slow to get out with the camera and see what's been going on around the farm in my absence.

Here's #348 with one of the twins beside her and her calf in the foreground. 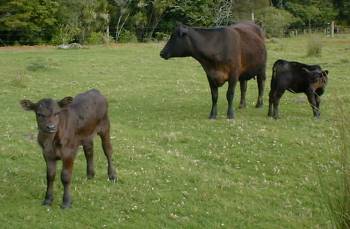 Ivy's twins have been being fed by #348 during my week away, about which I'm quite happy.  #348 has a good udder and is in good condition, so it won't harm her to feed another calf from time to time.

This is the 'backwards' baby in closeup.  I think she's looking excellent. 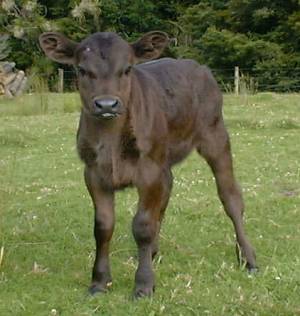 Ivy is still terribly thin, although looks slightly further away from imminent collapse now than she did a week ago. 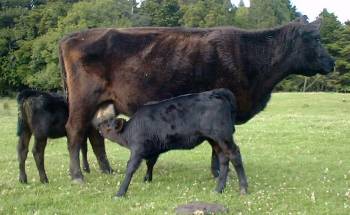 Ingrid, the elder of the twins, is scouring, presumably because she's not getting the right quantity of feed for her needs, or has perhaps been getting some fairly rich milk from #348 which is disagreeing with her.  Ivy just hasn't the reserves, nor adequate dietary intake at the moment, to produce enough milk to grow her calves to their probable potential.
In a usual spring, the lactating cows would be in paddocks with grass up to their knees.