Stephan spent the day removing and then replacing an old fence at the end of one of the flat paddocks.  The decades-old original fence had become increasingly shaky over the last few months.  It would not have held up to the amorous intentions of one of the bulls or an on-heat heifer, if either had wanted to get to the other, so it was time for replacement. 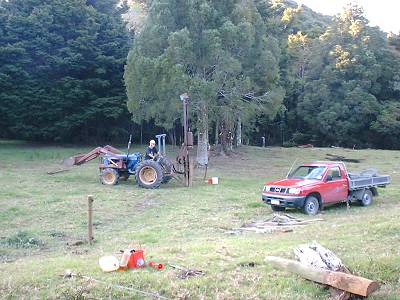 The new fence is a five-wire electric fence, which should stop even the sheep from venturing further, since they live only on the front part of the farm.

I went back out to attempt to get the young stock out of the back paddock.  This is how much of the farm is looking at present: no grass. 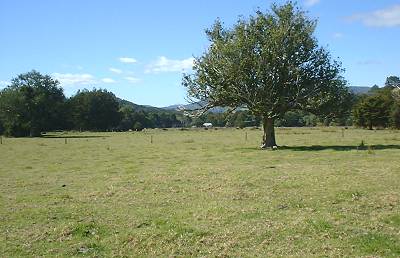 Obviously "no grass" still means some greenery, but it's just the base mat of Kikuyu and the brownish matter is the dry fibrous stolon system from beneath the fresh leaf, which the cows seem to spit out as they graze.

Kikuyu is an African grass, spreads everywhere, grows like mad when the temperatures are warm and there's a little moisture, and it's what we grow all our animals on, mixed with the clover which grows amongst it.  The ability of the clover (and the odd bit of rye and other grasses) to grow through the Kikuyu, depends very much upon the management of the Kikuyu, since it can easily form a dense mat in the pasture, which shades the plants which are trying to grow with and through it.  Some people mulch their paddocks (cutting the grasses to ground level and finely shredding the waste), others use their breeding cows at this time of the year, to keep it under control. 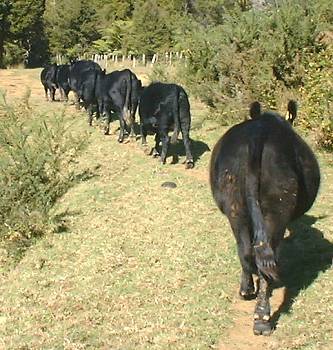 Out the back, most of the cattle were down near the gate, or came down when I called.  The others were all sitting happily under a tree and I had to go and make them stand up and walk down the hill!

I took them all in to the yards and weighed them individually, then put them back around through the yards again for copper injections.  I find it easiest to put three up the race at once and quickly inject them, then let them out - it's all over quite quickly and none of them get as upset as they might one-at-a-time up the race on the weighing platform.  I'm keen to avoid them associating the weighing platform with pain, since I want them to quietly stand there during recording!

The cattle apparently need to be kept as quiet as possible during this treatment, since I'm effectively overdosing them with copper, which is then transported from the injection site to the liver for storage.  The package tells me that if they are in an excited state, the copper gets moved into the bloodstream too quickly and can cause copper poisoning, death, disaster.  The copper injection must also be given on its own, so no other treatments can be administered at the same time. 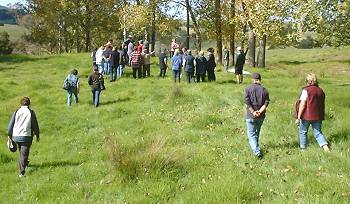 Another of the Women in Agribusiness days, this time down at Umawera (about 40 minutes drive from here), hosted by Beth Geddes, who is a commercial Angus breeder.  Topics for the day included fertilizer, pasture renewal and this, out in the paddock, a session on managing Kikuyu grass for the best production.

The pasture renewal session assumed that we'd all want to get rid of our Kikuyu in favour of better feed quality grasses, but most northland farmers realise that without Kikuyu in the summer, they'd have little feed.

The other difficulty with trying to eliminate Kikuyu from northland pastures, is that it is rarely successful for more than three to five years, by which time the Kikuyu will have begun to creep back and take over again.

Presumably some farmers may have some success with repasturing, but others have reported spending thousands of dollars on such renovation, only to face weather conditions which were too dry for germination of their seed, or too wet and washed it all away, thus their ability to recoup their costs was severely diminished.

We are experimenting with oversowing: at this time of year we sow an annual rye grass seed over the Kikuyu, then bring in the clean-up mob of cows to graze the Kikuyu down to a low level while simultaneously walking the seed into the earth.  The seed then germinates and grows during the Kikuyu's off-season, providing green feed at a time of year when we otherwise struggle to feed the animals well.  The Kikuyu won't start growing again until the soil temperatures rise significantly after winter - which didn't happen until sometime in December, last season.

The last of our paddocks along Diggers Valley Road has a very old fence, which now fails to restrict the movement of cattle out onto the road.  The last time that happened, we returned from a night away to discover one of the stud heifers in an excited state, running up and down outside the fence, and the rest of the cattle quite upset.  She hadn't been hit, but there had been some alarmingly fast traffic passing, just before we arrived on the scene.

My nephew, Issa, and I went and helped Stephan for a while, by stripping the old fence - removing the staples from the posts and battens so that he could roll up the wire.

Below is a tree which had grown up through the fence over the last few years.  I'm not sure how old the tree is, but it isn't a very small one! 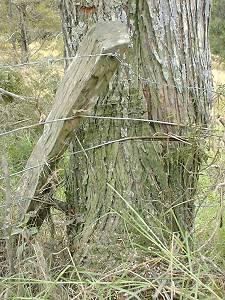 We moved the lambs today for the first time as an independent flock - they've been moving themselves since weaning, led by the naughty bottle-fed lambs, who go through any fence they want to!

With the help of Issa and Rachel (my visiting sister) and Jill and Bruce, we finally got them out of their paddock, across the next, down the lane and into where I wanted them, with some nice fresh grass.  I am hoping to get them away to the works in the next week or two, before we run out of grass for them to eat, since I suspect many of them are now sufficiently rounded to go. 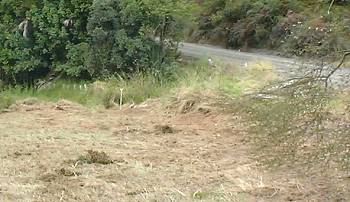 The fenceline by the road is now partly cleared, so it becomes easier to see how the area will look when finished.

The gateway has always been at the far end of the fenceline, which made sense when the other paddock across the road still belonged to this farm, but that no longer being the case, we've decided we will move it so that it is opposite the gateway from the hill paddock which does belong to us. 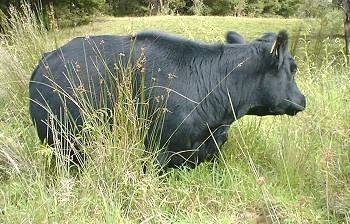 Out on the farm Inga was up to her belly in the swamp!  Having a pedigree going back decades doesn't stop you getting down and dirty if there's some tasty grass in the middle of a bog.

I called all the cattle together and out of the paddock, to take the largest of the steers and one cull heifer down to the yards for a pour-on drench and then to go over the road to hopefully gain enough weight to be sent off to the works before the worst of the winter hits us. 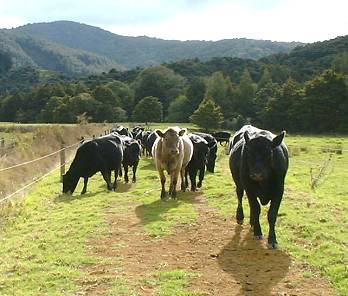 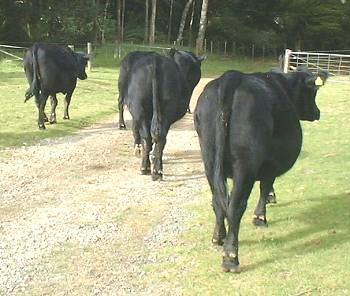 Once the cattle had passed into the final section of the lane on their way to the yards, I opened the gate back into another paddock and began drafting them as I walked.  Such division is just a case of quietly overtaking the animals as they walk or graze, whilst ensuring those wanted remain ahead.  The picture at left above shows those I had already passed, while that on the right is of those I wanted to get in to the yards.  I lane-draft when I can if I only want some of the cattle from a mob.  On my own, it's easier than trying to do the drafting between two yards with the whole mob. 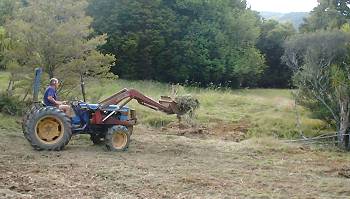 Then I went up the road to find Stephan just finishing off construction of a culvert crossing, over the drain opposite where the new gateway will be built.  He came back with me to help put the six big cattle over the road.  It's a job I could do on my own, since the cattle know where to go and usually do so fairly easily, but we prefer not to move cattle on the road without two of us - one at each end or side of the mob.

The hikoi (march) in protest over the Government's proposed "Seabed and Foreshore" legislation, passed through Kaitaia this afternoon.  As I happened to be on one of my infrequent visits to town, I took photos and walked for a short distance with the marchers. 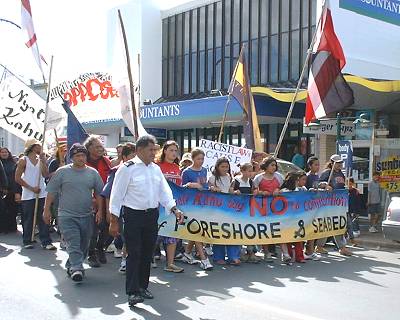 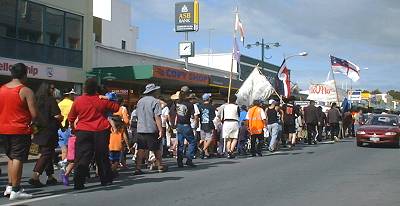 The legislation was proposed after the Iwi (people) of Te Tau Ihu (of the Marlborough Sounds in the northern South Island) received a ruling from the Court of Appeal saying that the Māori Land Court could hear a claim over the Sounds as Māori customary land.  The Government stepped in to prevent the possibility of a ruling in the favour of Te Tau Ihu, by proposing to legislate Crown title over the foreshore.  Such legislation would extinguish various rights assured to Māori in the Treaty of Waitangi (the document signed by Māori and representatives of Queen Victoria in 1840, which enabled the formation of Westminster-style Government in this country).  There has been much "consultation" between members of Government, Māori and the wider public and there remains staunch opposition to the bill.

The Hikoi is planned to arrive at Parliament on Wednesday, 5 May, when the legislation is to receive its first reading.