Lynn and Kees, friends from Paparore north of Kaitaia, came this afternoon and took our ram away to live with their sheep.  As he now has his second lot of lambs about to be born, we don't want to use him again, but he's still quite young, so will now be useful to them.  Getting him off the property effectively gives me an extra sheep paddock or two, since I don't have to worry now about keeping last year's ewe lambs separate from their father.

This is Onix, who with the rest of the herd of 37 cows, is at the back of the farm, on not much grass, but ranging over a large area to enable them to find enough to eat. 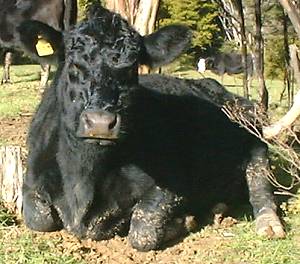 She's turned into a reasonably nice little cow, seems to hold her condition fairly well during this hard part of the year, so as long as her calves continue to improve and nephew Issa wants to keep her, she'll stay in the herd.

I went to see how steer #356 (with the hole in his side) was getting on and the young heifers with him all gathered around to see what I was up to.  This is 443, whose mother is the grey cow, 16.  She's a crazy wee thing, leaping around the paddock and bouncing up to people she doesn't know. 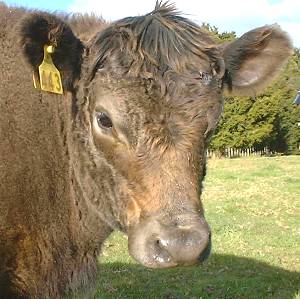 The steer is doing very well, now that he's away from the Mynah birds, his wound is dry and reducing in size by the day.

We're having another reasonably dry winter, so the ground is still quite firm enough to drive over with the tractor.  Stephan took a couple of posts and his fencing gear across to a stand of Puriri which I have wanted to fence off for ages, and erected a two-wire electric fence around them.  By the time he tied off the last wire, it was of course pouring with rain! 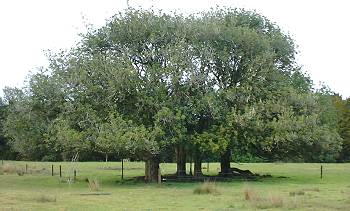 When we had a look, we realised we were too late to stop some significant damage to one of the trees, where the weaner heifers had stripped the bark from one of the trunks.  They haven't chewed all the way around, so the tree won't die, but it'll take some time to recover from this attack.  However it will now not be bothered again, so I shall watch with interest to see how quickly and well it recovers.

I've been inspecting the trees much more closely since last year realising that the cattle were actually eating the bark from them - it's surprising what one may not notice if one has not become aware of something happening!  We've previously assumed that the opossums were causing the Puriri the obvious stress they've been suffering, along with the cattle trampling on the shallow roots in places where the soil has been worn away around their bases.  On close inspection, I see that most of the trees have had injury to their trunks at the level that cattle can reach, probably going back several years.  The fact that it has obviously been a long-term problem gives me hope that we will be able to protect many of them before they succumb to the pressure.  Looking across the paddocks, it is now obvious which trees we've fenced off and which ones are still accessible to the cattle, by the thickness of their canopies.

Where we have sub-divided paddocks, we have deliberately run the new fences past the big trees, so that we may easily create small reserve areas around them.  The more difficult cases are those trees which stand alone, a long way from any of the fences.  Cost and time-wise it's a big job to get around them all.  What we need is a "Tree Benefactor"!  If you'd like to sponsor the protection of an ancient Puriri, please let me know!

I went walking yesterday to check on and move the cows, but one of them was missing.  Because the others had all gathered by the gate, I suspected 307 was in trouble, or somewhere she ought not to be.  I seem to be having this "missing cow" problem quite frequently at the moment.  I think it's a winter sort of thing, as they get hungry and push harder to get to places they shouldn't be.  I walked all around the three huge paddocks they now have access to and found no trace of her, so today I went back out again for another look.

There is a swamp which comes across our boundary from a bush reserve area belonging to one of our neighbours.  Fencing across swamps is a bit tricky because there's no solid ground and what is there is generally moving, so the fence is a bit flimsy and there were cattle hoof-prints and other tell-tale signs on the other side!  I couldn't work out where the cow was, so headed up into the scrub on our side of the next hill and there, in the dim depths of it all, was 307, all alone and very quiet. 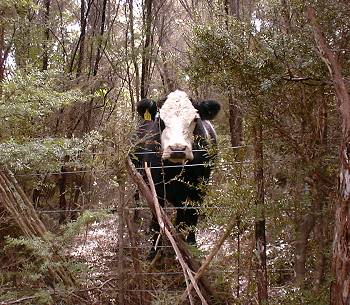 I've noticed that when the cattle are by themselves where they oughtn't to be, they tend not to make any noise, so they're usually quite hard to find.  I presume that's an instinctive safety silence: don't advertise your whereabouts when there's only you there to be eaten!  Often as soon as I arrive on the scene, they'll call to the other cows, when I've not heard them at all during my long search.

I tried to get 307 back down the hill to where she'd gone through the fence, but moving one cow who would rather stay where she's been "camping" in thick scrub is really difficult and frustrating, so I went home to get Stephan to come out and assist.  Two and three-quarter hours later, after herding her down the hill a couple of times, then following her all the way to the top after she ran around us through the bush, we finally got her to walk through a hole Stephan cut in the fence ... 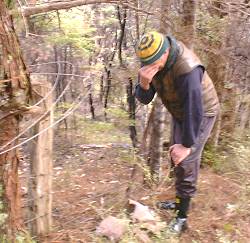 ... which he then had to fix.  He's not really sobbing, I don't think, probably just had bits of tree in his face.