Why is it that every time I visit my lovely sister and her delightful children, I then develop a nasty cold?  It seems impossible to avoid picking up viral nasties from small people!  Having returned from Auckland with a list of things to do which would excite any workaholic, I'm now feeling completely unable to do any of it.

The bank I borrow from Greg at Pukepoto, has been filled with liquid Nitrogen, so is ready for me to go and transfer my bull semen, which Greg kindly stores for the year in his usual bank, and to pick up the straws I've had couriered up here from a couple of companies further south.

The semen straws have been sent up in "dry shippers" which are liquid nitrogen storage flasks filled with some sort of foam which holds the nitrogen within it, so the whole thing stays as cold as it needs to, but if it falls over, the nitrogen won't spill.  That means a dry shipper doesn't need the same dangerous goods permits that a liquid bank requires. 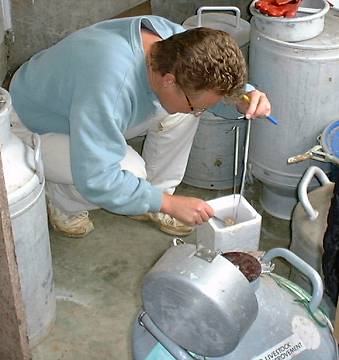 In the picture, I'm working with a polystyrene box full of liquid nitrogen, in which are sitting two of the canisters from the semen banks: one is from Greg's bank in which I had left all my remaining straws at the end of last mating season and the other is an empty one from the bank I'll take home with me, into which I am about to transfer some of the straws.  It is important to have the straws out of the liquid nitrogen for the shortest possible time - better not at all, but that's not practicable when one needs to transfer semen from one bank to another.  The use of the poly-box means that much of the transferring can be done with less possibility of any thawing in transfer.

The bull names cannot be read on the straws until they're thawed, so identification is done by the straws being stored in coloured plastic sleeves.  My "bank map" lists all the bulls' names, the number and colour of the straws, the colour of the plastic sleeve and the number of the canister in which they're stored in the bank.  Because the canister number is only inscribed on the neck of the bank and not on the cans themselves, one has to be a bit careful when getting them in and out of the bank, not to dislodge the others from their correct positions!

At the bottom of the picture is one of the banks, outside lid open, but polystyrene plug in place in the top.  A bank is effectively a very large vacuum flask.

Liquid Nitrogen's temperature is -196°C and it will 'burn' if spilt on the skin, so care is needed when handling it.  Ventilation is also very important: because Nitrogen makes up a large proportion of the air we breathe, if liquid Nitrogen is spilt and evaporates in the closed environment of a vehicle while travelling, for instance, the occupants of the vehicle may not be able to tell that the usual 8% Oxygen we need for survival has been displaced by the Nitrogen and suffocation may result! 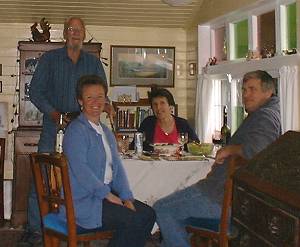 Jill and Bruce invited us to have Christmas dinner with them (i.e. glazed ham and Christmas steamed pudding with all the trimmings) at the Cottage in Kohukohu.

Dear Father Christmas,
I would really like a new digital camera to take better pictures for my website!!!

The weather has been foul and we're feeling sick, so we've done only what's absolutely necessary.  I've given up worrying about the exact start date for mating, since I can't put the heat-indicators on the backs of the cows in the rain and I'm too ill to go dashing around getting them in to the yards anyway!  Harrumph.

On both mornings, I've watched a baby Pipiwharauroa (Shining Cuckoo) in the Puriri tree outside the house.  Its incessant "pee pee pee pee pee pee pee pee pee pee pee pee .... " was driving me to distraction: the pitch is somewhere at the very top of the frequency range I can hear and so for some time I wasn't even conscious of what it was which was vaguely annoying me!  Then I recognised the call and went out to see if I could see it.  There it was, huge child of its tiny Little Grey Warbler foster parents, constantly demanding their whole attention, as they flitted around the tree, collecting small insects from the leaves and bringing them back to its endlessly gaping mouth.

The cows and calves had to come off the hill over the road, since they'd eaten all the grass and Gavin, who leases the land on the other side of the shaky fence, wants to put his cows and bull up there tomorrow.  The weather looks quite acceptable in this picture, but there were periodic showers throughout the day.

This is Crispin, my former bottle-fed baby, who still looks rather like his father, Bertrand, except he carries a great deal more flesh all over.  He's by no means a great bull, so I probably won't use him again this year.  He's produced eight calves from last year's matings.

Feeling just a little more lively today, I went out and brought the young stock in to the yards, weighed them all again and stuck heat indicators on the backs of those which were to be mated.  I have not looked after my two-year-old heifers well this year.  The young animals here generally get through the winter with only a slight loss of weight (which means they look pretty horrible, since they'll have been growing in frame size anyway), but then through the summer and autumn, they really pack on weight and condition with the fantastic grass growth we usually experience, then by the time they get to two years old, they're usually looking pretty good.  But because last year's summer and autumn were so cold and dry and the grass just didn't grow, the young cattle didn't get that boost of feed when they needed it.  I sold some of the mob early on, so the demand for feed would be less, but winter is not an easy time to grow cattle, so they're still lighter than I would like them to be.

My drenching programme has suffered a slight glitch as well: I thought I'd done this mob along with the cows, before calving started.  Because they were looking so dreadful, I went carefully back through my notebook and realised that I hadn't!  I whipped them in to the yards on Saturday and, because the sky looked very like it might produce rain, just drenched the heifers which were on the possible breeding list.  I accidentally missed one because she looked so big and healthy: she'll be a "keeper" since she obviously has the constitution to cope with anything which might challenge her here! 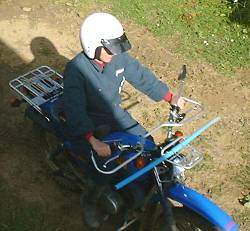 I thought Stephan was curled up in bed, but he obviously had the camera handy as I whizzed by on my little "mobility scooter" - thank goodness for such a machine when I'm feeling so feeble!

Then I went out to set up gates to send cattle to the paddocks I wanted them in and drafted Quadrille and Arran out of the house paddock into the two areas they needed to be to join with the heifers I was about to send their way.  Back to the yards and out again steer 356 to keep Crispin company, and four of the yearling heifers and Ivy's twins for Quadrille, then five of the two-year-olds for Arran.  Some stayed near the yards in the insemination mob and the rest went off back to where they'd come from, to wait for the next fine break in the weather so I could get the drench onto them before they go out to the back of the farm for the summer.  Demelza 21 and 456, Onix's heifer, were both just a bit light for mating, and Amelia 16, Isla's second daughter who is now two years old, has been a very disappointing animal altogether, so I shall not keep her in the herd, either as a stud or commercial cow.  Her EBVs are fine, but she herself obviously lacks the ability to do well on this farm, so there seems little point in carrying on her line.