After ordering our fertilizer for the year some months ago, some of it was finally able to be delivered and spread this morning.

We did a soil test again last year, to check how we were progressing with raising the fertility of the soil on the farm.  For several years we've been applying RPR - Reactive Phosphate Rock, which is an organically acceptable way of returning phosphate to the ground.  We were, like most farmers in the area, initially urged to apply Super Phosphate, as a matter of course.  I wasn't happy that that fitted with the profile of our soil at the time and did some research on other available products.  I had to seek out a different fertilizer company representative before I could even discuss my concerns!  The farm at that stage had not had fertilizer for some years, since the time Stephan worked with an aerial top-dressing pilot and was able to apply fertilizer as a perk of the job.  We started off with a couple of years of a high-phosphate mix and then switched to RPR as an ongoing maintenance plan.

We can't see him, but Sebastian is in the cab of the truck with Don, having a great time!

Sebastian and I left Don to go off back to his depot when he'd finished and continued to the back of the farm to check the cattle.  Sebastian is getting more and more comfortable with close proximity to cows and even stroked Isla while we were up there. 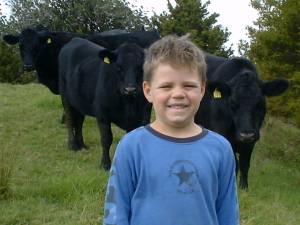 We had the vet out to do the Leptospirosis vaccinations and to pregnancy check the cows and heifers.

We now know that we have 40 pregnant cattle, due to calve from 15th September this year.  Onix is pregnant and due, I think, between 26 September and 11 October.  The vet indicated that some of the cows' conception dates must have been later than I know they were.  She thought Isla was only just pregnant, but having inseminated her myself, just before Christmas, I think she must be wrong.  There were four not pregnant: one yearling, one two-year-old whom I never saw on heat at all, one two-year-old (#343, who won a first prize at the A&P show in 2002) whose first calf last year was very poor, and a cow who has only had one calf when her contemporaries are now producing their third.  The latter three will go off to the works, along with #24, whom I had already decided to cull from the herd.

The ducklings now have enormous wings.  Both have now started flying short distances across the garden. 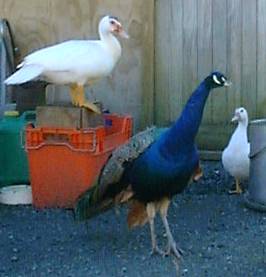 Yesterday Stephan, Sebastian and I went into the paddock where Iona died last year and erected a fence around the place where we buried her. 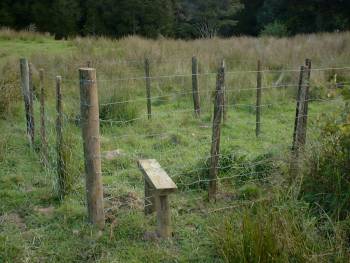 Today, a year since she died, I planted two Pohutukawa tree seedlings and a tiny nikau palm I'd grown from a collected seed.  The fence will exclude the cattle and sheep while the trees (I hope) get established.
Iona was a lovely animal, whose life was a delight and whose death affected me enormously at the time.  Mostly, I think, because of the violence of that death, and because I'd planned and caused her existence in the first place.

I then went out the back to check the rest of the cows.  I had a need to know that they were all safe and well, today. 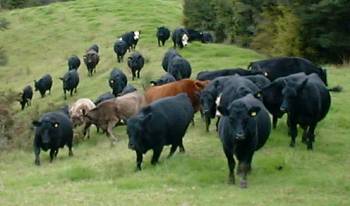 Kursty and Daniel came to stay for a couple of nights (before they take Sebastian back home with them tomorrow), arriving last night.  The house was suddenly very noisy this morning when Sebastian realised that there were some very familiar people sleeping on the floor.

Stephan, Dan and Sebastian spent the whole of today fencing.  They built two sections of a new lane out to the back of the farm before the post-thumper needed a bit of maintenance and it was time to finish for the day.

On the way back in, we all went hunting for the hammer which Sebastian had dropped in all this long grass.  This is the finder, Kursty, receiving a special award from Sebastian, in recognition of her excellent hunting skills. 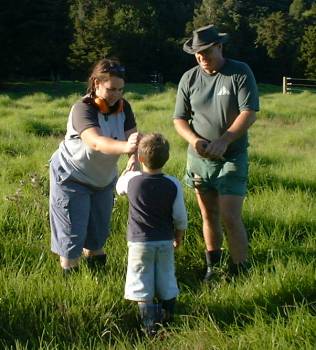 Finding anything in this paddock was pretty amazing - we thought we'd have to wait until after the cows had been through and thoroughly chewed it down.  The one clue we had in our hunt was that Stephan had told Sebastian it would be easiest to walk along the wheel-tracks from the fertilizer truck.