After a week of secrecy (which I was unable to document, in case Stephan had taken one of his infrequent visits to the website while in Auckland) a long-hidden plan was able to "come out".  I had decided a couple of months ago that it would be fitting to have a surprise birthday party for Stephan and had therefore secretly emailed and spoken to as many people as I could think might like to come.  Fortunately a couple of very nice friends had decided to stay with us for Queen's Birthday weekend, so Stephan intended to come home in good time to enjoy their visit, and unknown to him, his party.  I was, however, able to persuade him to stay away until the last possible moment, while I shopped and cooked (which would very definitely have made him suspicious, since that's something I almost never do any more) and continued to prepare for Sunday evening's party.

I took Stephan to his sister's house, where many people had gathered, on the pretext of attending a party to celebrate his mother's birthday and he was delighted to find so many people he'd not expected to see, there to spend the evening with him.

A very talented cake decorator had whipped up a "novelty" artwork, which we unveiled before him... 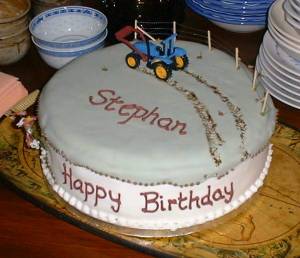 ...to his great delight.

Later, Iphigenie did a belly dance in Stephan's honour, which everyone enjoyed very much.  There can't be too many people around here who've had that happen to them at their birthday party! 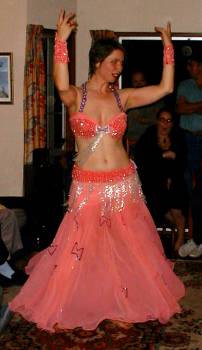 Then, because some of us are now getting quite old (and had to get up at 4am the next morning) we all went home to bed.  Thank you to all those people who travelled to come to the party and all those who were already near and came and brought food and presents.  The evening was a great success and was said to be "the best birthday I've ever had".

Needing to settle down again after so much excitement, Stephan and Grant had a knitting lesson.   I can just imagine them with rugs over their knees in a few years time! 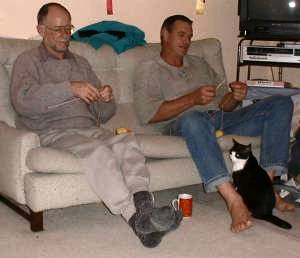 Winter is so dismally wet and dark, that one needs to find useful employment during the long evenings.

On which topic, I feel I must now direct you to the new Crafts page, wherein you will find my efforts of a few recent evenings.

With too much time on my hands and little opportunity for outside pictures, I start looking for subjects closer at hand, thus I have significant pleasure in introducing Cattin Catulus, my friend of the last (nearly) twelve years.  We get on very well, he and I, being similar in temperament, (we both bite when annoyed) and I have to clip his toenails regularly to avoid too much blood on the floor. 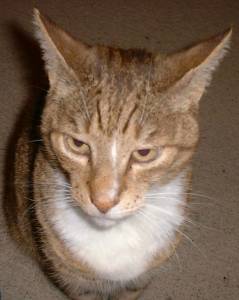 The picture is quite true to colour, i.e. he is indeed a brown cat, not orange nor tabby, but brown and spotted!