The week beginning 1st of November, 2003.
Saturday the 1st 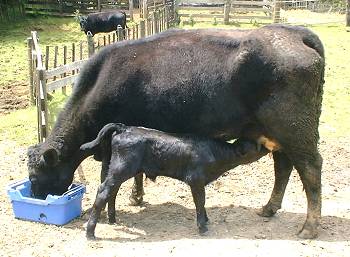 Still perservering with Flower and her calf, we have progressed to a bit of feeding without having to restrain Flower, at least for a few minutes, but not long enough for the calf to get a full feed, so then... 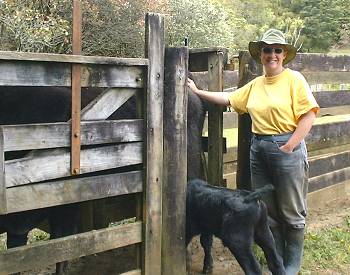 ... we had to restrain her again, for the
calf to have the rest of his lunch.

Out at the back of the farm, all was quiet, with calves and cows lying around in the sunshine.

The rest of the 25 in the paddock were scattered about the hillsides in this lovely basin, some of the cows were lying with them, while others grazed around nearby.  I found three calves on their own down in the bush near the gateway to the other paddock, peering out at me from behind some trees - I almost didn't see them, but as often happens, I had a feeling I ought to go back in that direction, from the path I had already chosen to take. 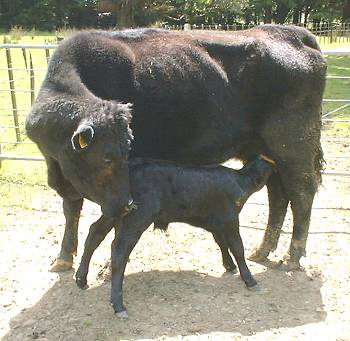 ... Flower turned and licked her calf a couple of times while he was feeding, but soon returned to bashing him with her head, instead.

This evening I caught Demelza for her second tying-up session with the halter and lead. 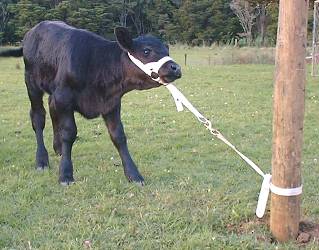 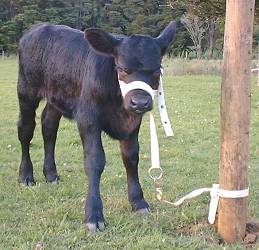 She's doing very well so far.  She spent a bit of time pulling against the halter, but settled down quite soon.  The purpose of this stage of the training, is to teach Demelza that when she's in the halter, she can't just go where she wants to and she can't get away, hence the use of a sturdy post.  I left her to struggle for a while on the first day, but this evening, I spent most of her tie-up time stroking and grooming her, so she begins to associate both my presence, and being tied up, with pleasurable sensations.

My mother Jill, and her Bruce, came to visit for the afternoon (they come here often, but we don't often take pictures of them) and we went for our usual walk, this time getting the calf to feed as we passed him. 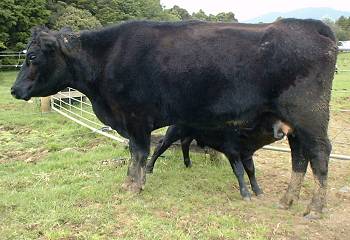 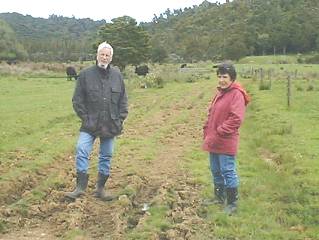 This, while it looks very much the same as the other pictures, is an advancement, in that Flower will stand and feed the calf in a different place than she's been accustomed to previously.  I can hardly believe that after an entire week, we're still having to do this for every feed!  I've been going out to do this three times a day, both to make sure the calf gets a good start, and in the hope of cementing a pattern which Flower will then allow the calf to follow.  I remain hopeful. 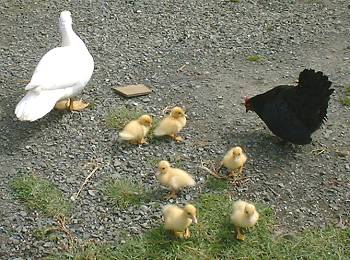 The two mothers meet!  The chicken and the duck haven't really met up with their babies before today.  I can't tell the difference, so I hope they can!  The hen's ducklings have responded better than any I've ever previously observed, to her "come here and eat this" and "snuggle underneath me now" calls.  Chicks understand their mothers from the start, but ducklings often take a couple of days to work out chicken-talk.  The duck has had her two babies all over the place - down by the bridge for a couple of days and latterly out across the paddock and up the lane.  She doesn't seem entirely devoted to her mothering duties, flying off and having a dip in the river, or appearing for a feed near the house while her bright yellow children stand peeping in the field, in serious danger if a hawk happens to be in the vicinity. 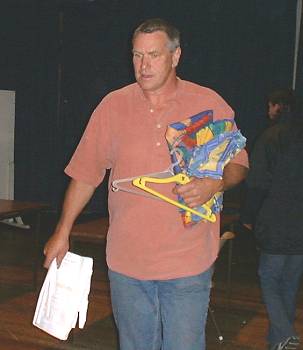 The Kaitaia Dramatic Society (KDS), with which both Stephan and I have been involved for the last few years, is to stage a couple of one-act plays sometime at the end of this month and Stephan has been in rehearsal (with his three co-stars) for some weeks.  I know most of the lines, having been reading the play for him as he learns his, but hadn't seen it performed until this evening.

Stephan originally became involved in the KDS when I volunteered him to paint the set of the first play I did with them.  He enjoyed being involved, very much, and there was a need for someone who was "handy" to build sets and heave props around and so he got involved with most of the plays which the KDS put on from then on.

He had a small part as a delivery guy on a play a couple of years ago, but had resisted the call to really get involved in the scarier part of things where people can see him, until now. 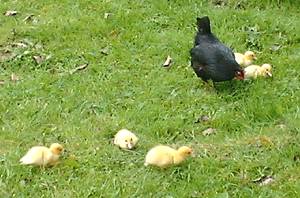 It had to happen: the duckling appears to have mislaid one of her children.  Here the hen has five of them and the duck was somewhere else with only one.

Later in the day the duck was wandering around like a young single thing again, and I could only find one lone duckling.  Eventually we spotted the other one, away up the track, toddling off in the wrong direction.  I have now "taken them into care", and caged the bantam and all six ducklings together.  The ducklings aren't happy about it yet, but will settle down and the duck is sitting outside the cage. I'm sure she won't wait there long, dreadful mother that she is. 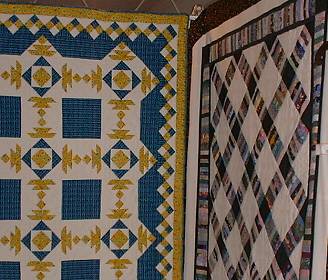 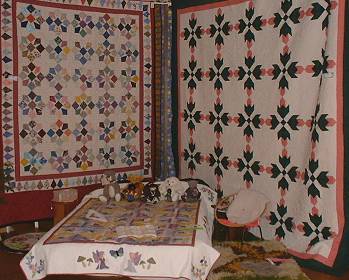 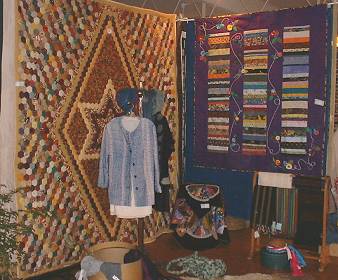 The Quilters, the Spinners and Weavers, and the Embroiderers of Kaitaia (and its surrounds) are holding an exhibition of some of their works over the next three days.  Here are just a few of the quilts, some of which are extraordinary.  The one with which I was most impressed, took its maker five years, every stich done by hand (as opposed to using a sewing machine for some of it) and is the "autumn colours" one pictured to the right.  (Any apparent imperfection has been created in the taking of the picture.)

Back home again with the babies... 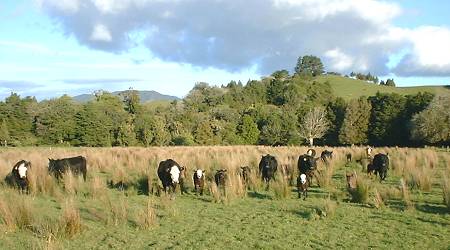 I've been stretching out the times the cows have been in some of the paddocks, since the grass still isn't really growing much, but there comes a time when they just have to be moved.  This paddock is one of the wettest on the farm, which is why the rushes are so prevalent.  Stephan wiped herbicide over them a few months back, which has killed a lot of them off, but they obviously still need work to eradicate them!  The calves seemed to be suddenly just appearing through the 'mist' of the rushes, as they ran to my call to the gate.

Early on some mornings, when there's a heavy dew, it's possible to see how the cattle graze.  Abigail has slept somewhere in the right-hand bottom corner of the picture, then grazed her way up the paddock, leaving her path visible behind her.

In the local paper, which I got around to reading during today, the Northland Age (published on Tuesdays and Thursdays), I found an article about the Kaitaia Intermediate School children's project to grow and sell tomato plants, to raise funds for their school.  I rang and ordered some and asked Stephan to pick them up before he came home.

Now we had a box full of plants which needed to go in the ground, he set about creating a garden in which to plant them.  The ducks, for the last few months, have been spending their nights penned up in what was the vegetable garden last summer, so Stephan created a new pen for them next door and moved them into there, so he could use that now-well-fertilized area for the tomatoes and whatever else we grow this year. 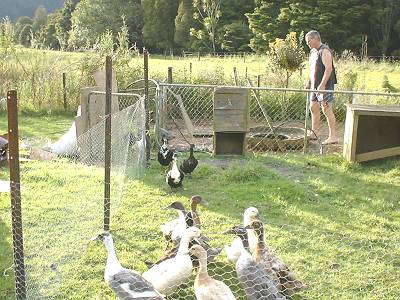 The ducks looked much better suited with a little more room and some nice fresh grass upon which to settle for the night!