This morning, Fran drove me to the motel where I, Jill and Bruce had booked to spend the night, being the same place as the venue for the reception after the wedding.  My nephew and partner were there with their new daughter, and Stuart kindly pointed out that I have now achieved Great-Aunt status - and I'm not even forty!

The wedding and associated celebration were quite delightfully arranged, the ceremony being held in the grounds of a historic building, then the reception back at the motel's function room, with a great meal, then much Scottish dancing.

One of the high points for me was meeting up with Christine, whom I haven't seen for about twelve years, since she and I were both involved in the National Collective of Rape Crisis's Core Group.  Christine and I used to regularly share a room at the Country Women's Institute house (mansion!) in Wellington, where the group of about twelve of us gathered every two months, from all around the country, for meetings over a whole weekend.  I really enjoyed that the essence of our friendship seems to have remained as it was, all that time ago.

I learnt today that it is very unwise to commence air travel when one has over-indulged in alcoholic liquor.  I shall describe my experience no more, and simply draw a damp flannel over the whole hideous experience.

I arrived home to discover that David and Kelly (Stephan's nephew and his partner) had returned from their tour around Aotearoa and that Diggers Valley had been their last overnight stop, last night, before they returned to Kaitaia.  They'd stayed on until I was due to return, which was very nice, and described their travels with the help of a well-marked map of the country. 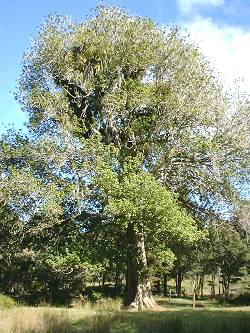 While I was away, Stephan did some fencing, including getting the electric feed down from one of the new lanes to this huge Puriri which has, over the last few years, suffered a great deal of damage from hungry cattle eating its bark.  It is immensely satisfying to make such advances in the rather large project of fencing off the big trees.  Anyone is very welcome to sponsor such a tree; in the mean time we'll keep doing so ourselves, gradually making our way around the farm.

In the afternoon, my sister and nephew, Rachel and Issa, arrived for a visit from Auckland.

Issa and Stephan went out to clear the scrub off a fenceline, Stephan on the machinery and Issa clearing the cut trees away.  Onix was hanging around waiting for Issa to notice her, but he didn't.

I went off to town for a meeting about the burned-down Arts Centre, leaving Rachel marking students' essays (what was that about teachers having lots of holiday time?).  In the morning I'd phoned and left a message for Anthony, my stock agent, to ask that he book the rest of the cull cows in to the works, since we continue to have no rain and I need to reduce the numbers of cattle which are chomping through the remaining grass.  On my return from town I received a telephone message from the trucking company to say they'd collect them at 8am tomorrow!  As it was nearly 4pm, Rachel and I went immediately out to round up the cattle and draft out those going.  Stephan and I yarded them and put the "Direct to Slaughter" tags in the eight older cows and left them in the small paddock next to the yards for the night. 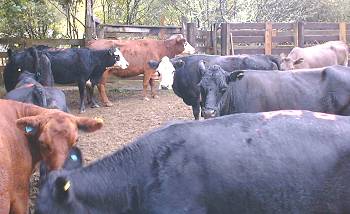 I brought the ten cows into the yards again as soon as it was light, weighed each one, painted our initials on their backs and said thank you and good bye.

Ten cows is a large number to cull, but I have so many good heifers coming in to the herd, that there's a great deal of selection pressure at the other end and I've culled on age, breeding and/or poor performance.

Going this time are:

With the Animal Status Declaration form went another from the vet, requesting that the livers of half of the cows be analysed for their trace element status.  We're interested particularly in Copper, Selenium and Cobalt.  The results should also tell us about the incidence of liver fluke and any disease process in the livers. 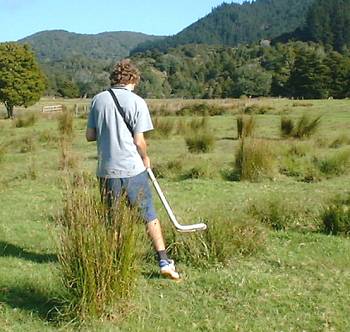 I took Issa out to show him how to wipe rushes.  It's a tedious job, but one I've been doing over the last few weeks and it's something Issa could do without supervision.  He worked for an hour and a half and assures me he wiped all the rushes in the paddock twice, because he wasn't sure if he'd missed them the first time.  I shall be interested to see the results in the next ten days or so. 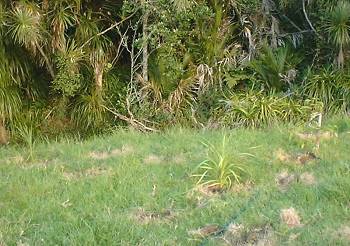 Before I went away, I'd wiped some patches of Kikuyu on the river bank, planning to plant some Cabbage trees there, so this afternoon Stephan and Issa dug fifteen holes and I planted the trees.  There were also a couple of flax and a Puriri - not that you can actually really see them in the picture!

This bank has worried me a little for some time, since it has been gradually eroded with each flood.  If the trees survive the floods this winter, they should do a lot to protect the bank from being carried away completely.

Rachel and Issa packed up and we all left home for Whangarei, meeting again for lunch with Jill and Bruce at the Vicarage there.  Jill has been the co-Priest-in-Charge for the last few months and Whangarei being half-way to Auckland for the rest of the family when they travel, the Vicarage has been a most convenient refreshment stop!

Rachel and Issa left for Auckland and Stephan and I went shopping!  I had booked to have a Molemap done, which involved a lot of standing about having bits of my body closely photographed.  Regular mole mapping is supposed to monitor changes in one's moles and freckles, so that early Melanomas can be detected.  It was expensive, but in terms of a sort of life insurance, hopefully well worthwhile.  I have an odd sort of relationship with the sun these days - it's so necessary for life, but can also be deadly. 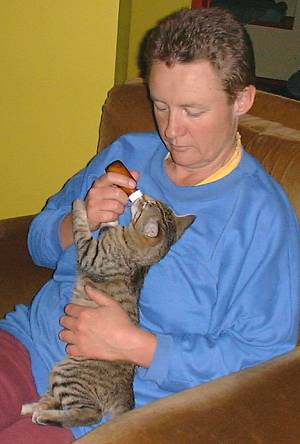 Finally we've run out of milk powder for Spice.  She's been having a 25ml bottle each night, just until the last of the powder was used up and tonight is the night.

I've enjoyed feeding her, since I've not ever had such a small cat to take care of.  She's hardly the tiny kitten any more though.  I'm glad I found her, but I do wish she'd get over her biting problem!