Usual gestation period for cattle is 275 - 290 days, Isla was inseminated on 22 December 2002.  More detail is available on last week's page - as well as a picture of the PRIZE!

Ronnie, who lives about 20 kilometers away from here and whom I met via the www.lifestyleblock.co.nz website a few months ago, has a goose, who happens to have begun sitting on a nest of her own infertile eggs.  Having failed to find someone with a bantam hen, and having none of my own at the moment under which to place the Muscovy duck eggs, Ronnie and I decided that the goose just might be a good option.  The goose will otherwise sit on her nest of empty and rotting eggs, for many weeks, or even a couple of months, before she gives up on them and goes away.  She's nesting in this swamp... 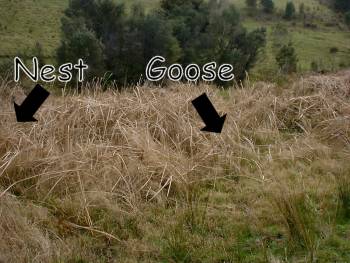 Large sitting birds can be pretty fierce, not only threatening (and delivering) painful bites, but also using their wings to batter intruders, so getting the goose out of the way to steal away her useless eggs and replace them with the living duck eggs, was a challenge I left to Ronnie!  And then we both walked away very quickly, because the goose was leaving too.

Ronnie then went back with some of the food she'd brought for the goose, to leave it at the edge of the swamp, hoping the goose would stay near the nest and then return to it. 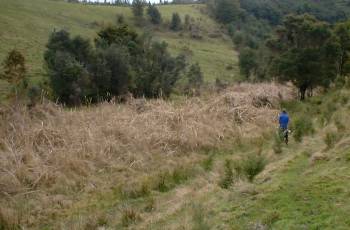 Arriving home sometime later in the afternoon, I looked across the paddock to see we'd had an increase in the number of our flock.... 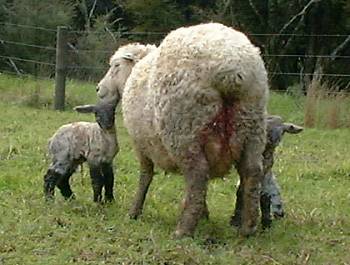 This is #23 and her ewe and ram lambs.  I grabbed each of the lambs and gave them a quick iodine spray on their navels, to guard against infection entering their wee bodies via that soft and damp area.  When they've dried out and had 24 hours to bond nicely with their mother and had a few good feeds, I'll try and catch them to put tags in their ears and rubber rings on the bits of them we want to have drop off (tails, testicles).

For dinner this evening, we shared a goose egg!  Not quite, but we did have scrambled eggs on toast. 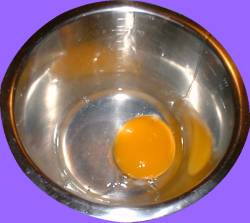 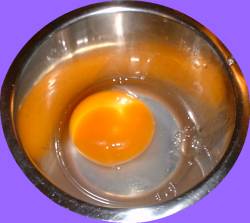 Ronnie tells me that the goose has returned to her nest and appears to be "sitting tight".  If all goes well, there could be 13 ducklings hatching in about three weeks time!  We didn't put the cracked egg in the nest, since its chances of survival weren't good, even less so when being sat on by a huge goose.  It'll be interesting to see if the goose accepts these babies as her own if/when they hatch.  If she doesn't like the sound of them, she may kill them, but we will hope not.

#20 ewe, who looked like she'd be the first to lamb, and had developed an enormous udder by yesterday evening, had twin rams early this morning. 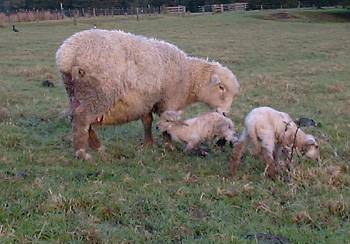 I shall try to refrain from exhibiting every lamb born, but the first few are such a delight to see!

What an afternoon!  I went out with a bucket containing the ear-tag applicator and the castrator device, which enables the application of the small rubber rings to tails and testicles, and put tags and rings on yesterday's twins.  Poor babies, I feel like a monster.  I have very mixed feelings about docking the lambs, but management practicalities will prevail.  Research recently released has found that lambs docked in the first couple of days of their lives cope better with that stress and any later on, as a result of being done early.  We have previously waited for a few weeks and done the whole lot together, because after the first couple of days, they're almost impossible to catch, unless penned.

Then I went to shift some of the cows around and noticed Yvette was still off on her own at the edge of the paddock.  When I returned, she was still there, with another ewe also obviously in labour, who turned out to be having a lamb nose first, which is not the way to do it!  I called for Stephan's assistance and after a lot of running around, we wrestled the ewe to the ground and I gently pushed the lamb's head back into its mother, found each of the front feet and carefully straightened them out into the birth canal and gradually eased the lamb out of the ewe.  She was a big one!  We walked away and the ewe got up and left the scene - and the lamb - at a very fast pace.  She wasn't going back to her lamb, so we caught her again and have now caged her and her ewe baby. 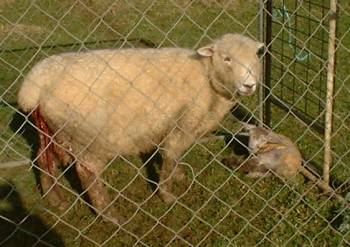 As I got ready to go off to see what Yvette was up to, the ewe began licking the lamb, and by the time I'd crossed the paddock, she was feeding it.  Without caging them together, we would probably have had an abandoned lamb to deal with.

Yvette, in the mean time, hadn't done a great deal, except clear a circle of ground of all its grass and any other plant matter.  I'm not sure why they paw at the ground, do they want to give birth in a hole? 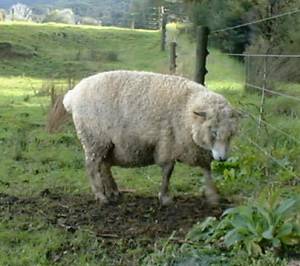 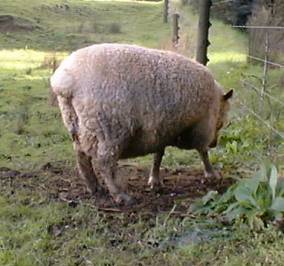 I sat and watched her for over ten minutes while she carried on doing nothing much.  I went to get some maize and Stephan, since it's easier to have him drop a sheep on the ground than have to struggle alone and somehow get the things I need nearby while the ewe tries to get away again.  Her lamb was huge and stuck.  He took significant pulling to get through her pelvis, his shoulders being quite wide.  Eventually he was out, she was up and doing all the right things .... 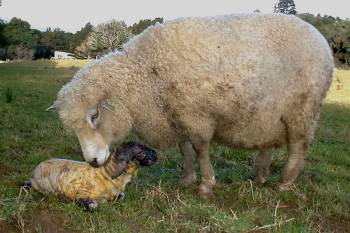 .... and we went back to the house.  Stephan went off to do other interesting things, I sat down with a glass of wine to start writing this and when going to the kitchen for a refill, spotted yet another ewe lying down waving her legs around and straining!

#1 ewe birthed one lamb while I stood and watched.  I would be surprised if she doesn't have another, although she's not showing any signs of doing so yet.

#1 ewe didn't produce another lamb.  Perhaps she's getting a bit old - she is six now, after all.

Babette had her third set of twins.  For the third time I assisted her!  She's lucky she's allowed to remain here at all, with that sort of history.  This time she had her first ewe lamb - she's the one at Babette's side. 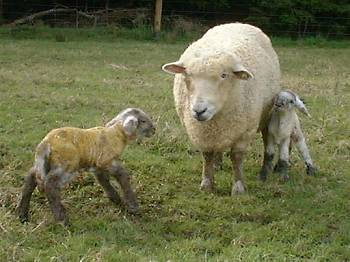 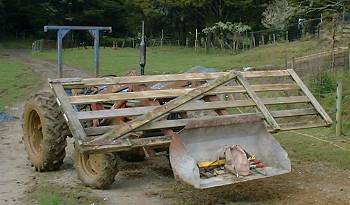 Several of the gates on the farm have suddenly collapsed, either at the end of a long period of obvious degradation, or in a couple of cases, bits just fell off them.  One I could no longer open easily, since it now bent in the middle and dragged on the ground; the other I could no longer keep closed, since the latch end of it had fallen off!  The other one had been rather seriously dealt to by Bertrand during some intense head-scratching episodes.
This is one of them, nicely renovated - new wood where necessary and rusted bolts all replaced.

The rest of the week I spent checking ewes and lambs, catching lambs for docking and castrating.

We've had some very cold weather, with nasty sqaulls of rain and hail over night, after which the latest of the lambs were born.  We've had 16 lambs from ten ewes, with another 12 ewes to lamb, not too bad going for the first week.