Today we went to the 114th Annual Show of the Mangonui County Agricultural and Pastoral Association, held at the A&P Showgrounds in Kaitaia.
We took five sheep, five cattle, umpteen poultry, tomato relish, blackberry jelly, scones, shortbread, the huge jersey and a change of clothes in case of rain (it did rain, but not until the end of the day and it didn't matter too much).
Stephan took care of most of the small animal show this morning, transporting all the sheep and birds and I went in with the very nice man with the truck, who came to collect the cattle.

After washing all the cattle, some with their cooperation, some without, I groomed Isla and Abigail, ready for the start of judging at 10am. The Registered section is judged first, so Isla and Abigail went out into the ring first in the "Cow with calf at foot" class. 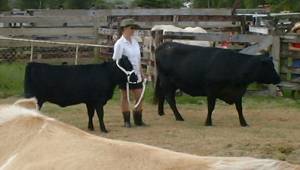 There were four or five entries in the class; a couple of Simmental, a Hereford and a Charolais and Isla placed SECOND!!! 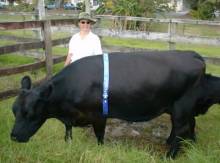 Here she stands with her nice blue second-place ribbon, back in her pen. 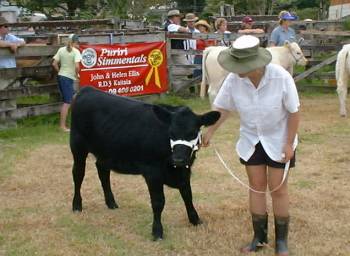 Then Abigail went out for her "Best heifer calf in show" class, with about six others, Simmental, Red Devon, Charolais and Hereford.... 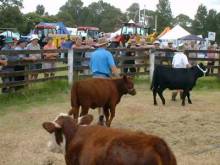 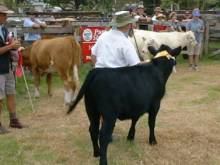 Then, after the Registered section, came the unregistered cattle classes. We had decided half-way through last week, to enter some of our commercial cattle, mostly to keep up the beef section entries in the show, but also because a bit of public exposure could be good for business.
Unfortunately no one else brought any cows with calves at foot, so this cow got a first.

The last class we entered was the "Heifer, yearling" for which we picked out this animal, from the four who'd been out with the bull during the summer. She's a nicely correct animal in terms of her structure and is in fine condition. It was really good for me to line one of my heifers up against some others of similar breeding and see that contrary to my belief that my cattle are small, they're actually probably doing pretty well. This heifer (she's the one on the left) won the first prize in her class, against two other Angus and one Red Devon. I am delighted.

You can probably tell... 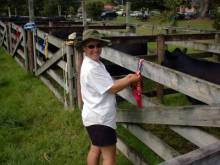 ... those ribbons on all the gates are the ones my cows won!

Stephan was awarded lots of certificates in the indoor section: 1st for his tomato relish; 2nd for the shallots and some eggs; 3rd for his blackberry jelly, shortbread and scones. The huge jersey got a 3rd prize. I give up! It's now achieved every place it could have, so I think Stephan can just get on and wear the thing now - if it gets cold enough this winter.

I was going to take a picture of all the ribbons and certificates all lined up together and perhaps I still will... tomorrow, maybe. It's not that we want to brag, just that we've really enjoyed it all and it is rather fun having someone else tell you that your produce and animals rank well against others.

Not everyone came home again with us - we sold several hens and the cute ducklings went to live with a girl who thought they were just what she needed, subject of course, to the consent of her mother!