Some of Stephan's nephews, a niece and the great-nephews (doesn't that make Stephan sound ancient?) came to visit to collect some firewood.  They brought in a couple of ute-loads and a trailer full and Samuel carried the bits that fell off.

They'll have to come back another day to collect the wood after it's cut, since a bit of the tractor broke this morning and there's no way to get it back to the shed to put the fire-wood saw on the back.

Later in the day we went back around to the new fenceline to get the tractor off the side of the road and the sunshine was just catching the Cabbage Trees along the roadside ... 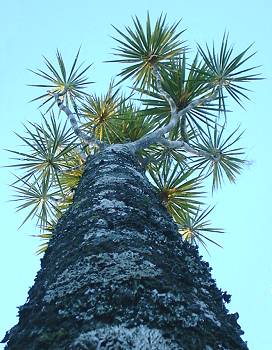 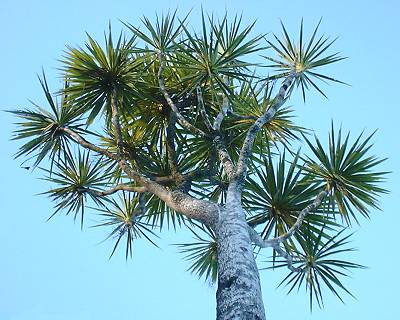 Now that the weaned cows are all in one mob, management of the cattle is much easier.  As a smaller mob, they're easier to find food for, since a paddock which would have held the whole lot for two days, will hold these for perhaps a week. 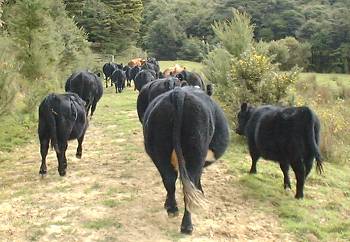 We took them out to the back of the farm, since there is so little grass anywhere, with the lack of rain! 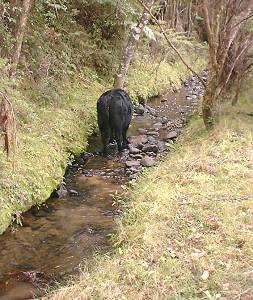 I'm not sure why this heifer decided to continue so far up the stream - they'd all stopped for a drink when crossing the water, but a couple had just carried on walking.  Cattle aren't usually very keen on walking on stony surfaces, since it can hurt their feet, and a large rock under one toe causes all the body's weight to be carried on only half the foot for one step, which is probably not very comfortable. 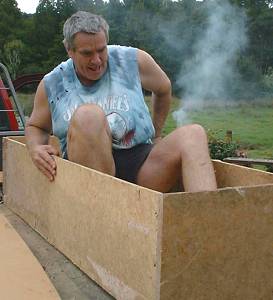 Later, Stephan built another of the props for the play "Wednesday to Come": a coffin, which he then tried out for realistic size.

I arranged for an agent to come and see our lambs, which need to go off to the works before we have to keep them all through the winter, so we got them up to the sheep-yards and into the pens for drafting.  With reference to their growth figures I had decided which of the ewe lambs we wanted to keep, so needed to draft them (along with the bottle-fed ones, of course) out of the way, before Gary arrived to have a look at the rest. 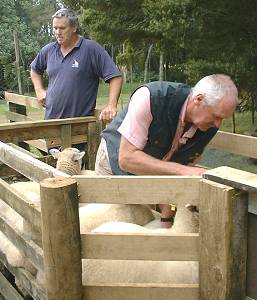 Gary put a paint mark on the heads of the ones which were ready for the works and told us we could expect to get them on a truck by about Thursday.  There were 19 of adequate size and condition, although Yvette's lamb is so big that he has probably gone beyond the best price for lamb, so we'll keep him for our freezer.

There is space at the works for our lambs to go today, so after a fair bit of swearing and running around, we got them out to the yards by the road and then we had to make sure they couldn't get out!  The loading race is all set up for cattle, but not for little lambs which have become accustomed to getting through fences, so we put a bit of netting around the place and waited with them for the truck.

There were three extra lambs in the flock - Bendy, Dotty and Tabitha had escaped from their paddock and made their way to the house paddock and all the lovely grass upon which the works lambs were grazing.  That was the other reason for us waiting for the truck - we had to make sure we got those three out before the others went, since we didn't want them to accidentally go off on the truck and taking them away beforehand might have encouraged a mass escape by the rest. 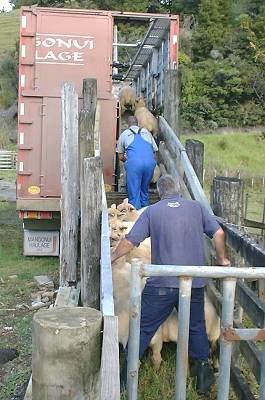 The truck finally arrived, late as usual, and we helped load the lambs.  Getting them to run up a long ramp when they've never done such a thing before is always a bit tricky!

Then we took the three wicked escapees back to the paddock with the others who had not gone on the truck. 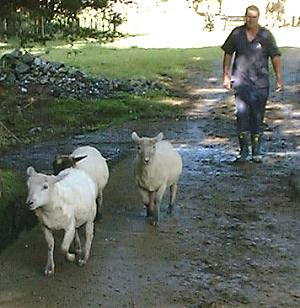 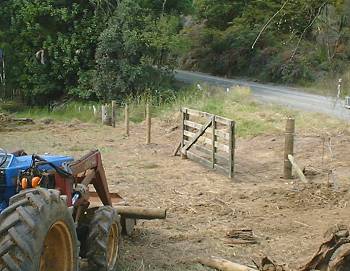 Stephan continued working on the new fence, putting in the posts and some of the wires.

I went to town for the Annual General Meeting of the Far North Art Society, which hosts the pottery group which I've managed to attend only once so far this year.  If you live anywhere near Kaitaia and yearn to get creative, get involved!  The group seems, like many such small groups, to be a bit low in energy, although there were some interesting ideas for the next twelve months' activities, like the possibility of holding monthly life-drawing classes, and a weekly drop-in day with a resident artist to assist people with any arts and crafts problems and learning.

I suddenly realised it was the due date for my Goods and Services Tax return, so spent most of the day "putting my house in order" - literally.