The inverse face-lift appears to have stuck overnight, through some fairly heavy rain. 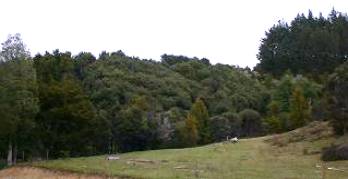 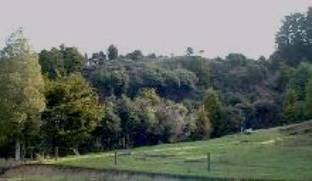 It's not quite as easy to see in a wee picture, as from the ground where I was standing, but there's a different skyline at the brow of the hill and many trees are now visible individually.  Much of the cut-down vegetation will break down where it now lies, the larger wood we'll take out for firewood for sale to those lucky enough to have fireplaces and the need for such fantastic fuel to burn.  This was actually finished by the end of last week and here's the next target... 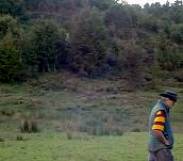 Monday, we went to Whangarei.  Just south of Kawakawa the wattle trees were flowering brilliantly.

Tuesday morning, when I looked out the back door, it seemed as if the puriri tree had shed lambs all over the ground beneath it.  While delighting in the scene I realised that Lulu was amongst them with a tiny new daughter and most of a son...

...who at that stage wasn't quite all out.  He gradually made it around to the front end of his mum.  But, she didn't want him in the end.

Wednesday night and that poor wee boy has just died.
Perhaps Lulu knew something we didn't.  He just wasn't quite right.

Here's my beautiful Isla.  Perhaps I'll run a sweepstake: a pot of lemon curd/honey for the closest guess on the birth time; entry fee one lemon.

She'll do it sometime between 14 & 29 September according to usual gestation expectations.  (Insemination date: Wednesday 13 December 2000.)