I've become a bit slack about picture taking and then updating the site for a couple of weeks, but here, finally, is the news...

The two remaining Pheasantams have been making rather a nuisance of themselves next door in Jane's garden, so we've been trying to catch and restrain them for a couple of weeks.  I managed to catch the orange one a few weeks ago and put her in the large chicken run with the hens, but after a few days there, she escaped again. 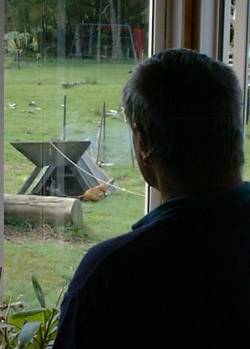 Having emptied the cage outside the front of the house of its previous occupants, we discovered the pheasantams felt quite comfortable investigating the inside of it.  So Stephan set it up as a trap, baited with maize and with a string from the hook holding the door open, to the inside of the house, where he sat waiting for the birds to come for a feed.  Fortunately it didn't take too long, as they seem to be creatures of habit, having a particular "round" they do each morning, before going next door.

As soon as they were inside, Stephan pulled the string, the door slammed shut and he went out to latch it securely.

We left them in this cage for a few days to get them used to our presence again, before taking them back up to the renovated chicken run with the hens. (They actually escaped again by the end of the day, despite all the increased security measures!  So, back to the drawing board.)

This has been a most difficult spring!  Usually we have fairly late spring grass growth, since we rely so heavily on Kikuyu, which grows well only when the temperatures are warm (so is ideal for this place, most of the time).  This year, however, we are still waiting, several weeks later than we usually do, for the grass to begin its spring growth-spurt.  That is proving very stressful for our friends who rely on the grass for their diet, and for we who have to try and find them something to eat!

By the end of winter, many of the animals get moved almost only for a change of scenery, into paddocks with not a lot more grass than the ones they came from.  The cows due to calve and the ewes as they approach lambing, all get grass which has been carefully saved for them, and generally, by the time those saved paddocks have been eaten up, the grass has begun to grow quite quickly elsewhere, so the pressure is off.  This year, after they'd eaten the good long calving/lambing grass, they've had to do some serious foraging for their ongoing needs, a situation I'm not at all happy with, particularly for lactating cows.  I expect calf growth-rates will be quite depressed this year.

Ivy is having a really hard time.  After gestating her twins, she's now having to feed them on an inadequate diet.  She is extremely thin and we're feeding her all sorts of feed supplements to try to get her back into reasonable condition again.

These two are so cute.  They walk around shoulder-to-shoulder and often sleep like this.

We were brought a special present this evening... 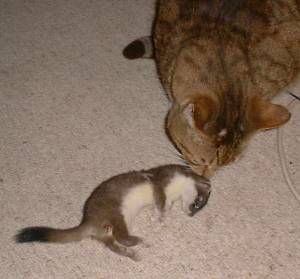 We have seen an adult stoat near the duck pond on a couple of occasions and know that she's living in the base of a fallen puriri tree.  We've tried to shoot her and to trap her with a trap lent to us by lovely neighbour, Grant, but with no success yet.
This is probably one of her children.  I presume Cattin caught it himself.  He didn't eat it, just killed it and left it on the floor.  It's a very cute little animal - I can see why people like them as pets - but they're so destructive of native wildlife, so I'm glad to see the cats can catch them.

After this one was brought in, I went out to see if any more were around outside.  Foxton was obviously stalking something near the hole in which they live, but I couldn't see any more.

While I was out, I went hunting for possums and rabbits and discovered our penultimate calf for the season, finally, a bull to #74, just born and being licked dry by his mother.

#348, the last remaining pregnant animal on the farm, was behaving very oddly at about 8.30 this morning.  She was calling out in an unusual manner and looking uncomfortable.  She is a two-year-old heifer, in calf to our Virago 07 bull, and should have calved some days ago!

Just as I got in the car to go to town, she lay down in the paddock and looked rather like she might get on with the job of calving.  So, engine running, I sat and watched her for a few minutes, and then decided that I'd really better stay home and keep an eye on her. 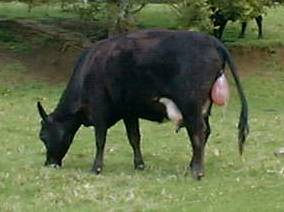 About half an hour later, she produced a fluid filled bag, then got up and paced around uncomfortably again for a while, until that burst.  Since she didn't appear to be doing anything else very quickly (like producing feet, for example) I went off and had a cup of tea. 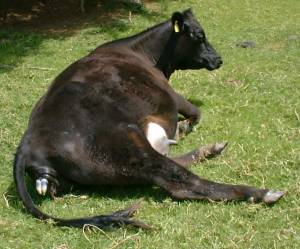 Then, through the binoculars from the house, I could see she had something white protruding from beneath her tail, so went back out to make sure it was the right number of the correct sort of feet.

It wasn't.  There was only one foot and it was the wrong way up!  Calves usually sort of 'dive' out of their mothers, two front feet first, then the nose and head, then the rest.  It is reasonably easy to see if the feet are the right way up or not for that position, as soon as they start poking out of the cow.  This is the underside of a foot.  I tried to imagine if it would be possible for it to somehow be a very twisted around front foot, but things would have to be fairly muddled for that to be the case.

When this happens, there's only one thing to do: take the cow to the yards.  Unless a cow is extremely quiet, it's not possible to go in for a feel for what's going on, out in the field.  In the case of possible backwards calf presentation, it wouldn't matter how tame a cow was, it would be impossible to apply enough serious pulling pressure to get the calf out successfully.

We walked #348, and Ivy's twins for company, in to the yards, with Ivy following along in her own time.
Once #348 was confined in the race, I was able to find out what was going on inside her.  The other foot was caught just inside the birth canal, and with a bit of careful feeling, I was able to confirm that the feet were the back ones and that the tail was present in the right position too.
We tied a couple of ropes to the legs and began pulling, but were unable to move the calf much at all.  I decided it was best that we stop at that stage and phoned the vet for assistance.  I waited for the next half hour, watching the legs of the calf for any movement to indicate it was still alive.  Eventually it stretched one ankle a bit, so I allowed myself a little hope that things might be well.
When the vet arrived, he put chains on the legs in place of our ropes and connected the whole lot to a rope and pulleys which were secured further back in the race.  A breech calf needs to be delivered quickly, since as soon as the umbilical cord is broken or squashed as the calf comes out, the calf will try to breathe, and since at that stage its head is still inside its mother, it can only breathe in the fluids around its head and thus it would drown if not very quickly dragged out into the air.  It's all a pretty stressful process, for everyone.  The poor heifer was very uncomfortable and apparently in some pain, but with very quick work and a great deal of pressure, the heifer calf was safely delivered and hung for a few minutes over the top rail of the race, to drain the fluids from her mouth and nose. 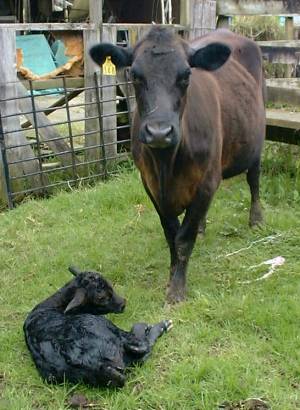 #348 didn't quite know what was going on when we let her out of the race, but after I propelled her over to the calf and she smelt her, she began to do all the right things.
I went back to them a couple of hours after the birth and helped the calf to stand up and then to begin feeding (she was pretty slow to get going, no doubt as a result of her rather difficult birth).  I was able to milk #348 a little during the process (she was too busy eating her afterbirth to take any notice of me!) and saved the milk in a bottle for later, since the calf didn't seem to be persistent enough to actually get her first drink then.
Later still, I went to check again and the calf was very sluggish.  I had rewarmed the milk I'd earlier collected and had it ready in Crispin's old feed bottle in case she needed a kick-start.  The calf wasn't terribly eager to suck, but as soon as she had a little milk in her mouth, she very hungrily drank the rest and then went to her mother for more.  I think she was just too tired to be bothered trying very hard to get her first feed and had given up.  She needed a little reminder of what she was supposed to be doing!

Later in the evening we took #348 and her baby back to the paddock to the other two cows and three calves.  She is proving to be an excellent mother, in that she's very aware of where her baby is, despite her young age and the distress of her calving.