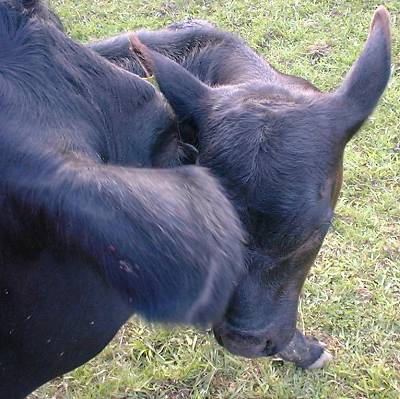 Having returned from our "holiday" away, I was very anxious to get the cows out with the bulls and the semen bank sorted out.  I had, over the last couple of weeks, spent some time arranging for my newly purchased semen to be delivered in time to be available to me before the holiday days started to interfere with deliveries and then got completely fouled up with the "middle men" on whom I was relying for telephone calls to confirm delivery and availability of what I needed and I had to take a few deep breaths and relax into the reality of an extra couple of days' delay.  Two days doesn't really sound much, but actually means, in the case of the cows which are on heat on today and tomorrow, an extra three weeks delay to their possible calving dates.

Neil, from down the road, came and helped Stephan get the sheep in and together they got all the ewes, and the remaining hoggets, shorn.  Stephan was very pleased with his new shearing set-up, with gates all working as and where they should and everything positioned correctly for the most ease and efficiency as he worked.  In the picture below, the sheep to be shorn is caught and dragged out of the gate on the left, which then swings shut again, then after the shearing is completed, the sheep is popped out the open hatch-way on the right in the picture.  Neil is off to the left, out of sight, sorting the wool, under Stephan's supervisory eye. 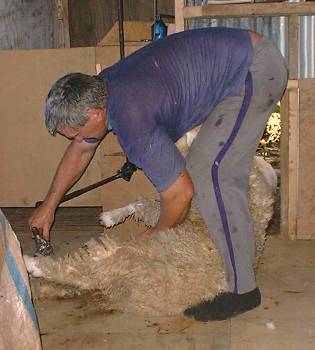 I got all the cows and calves in to the yards and applied the heat indicators to the cows' backs... 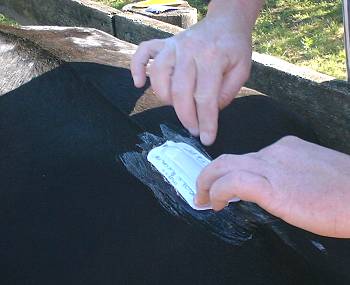 ... then drafted Crispin's nine cows and their calves out and sent them off to a paddock, collecting him along the way, since he was conveniently standing by the gate.

The whole process had taken ages and we'd started fairly late in the day, so as to miss the hottest period, so we were struggling to read the tags in the ears of the last calves we drafted.  We stopped at that point and sent the rest of the cows and their calves to the house paddock for the night so we could sort them out tomorrow.

The indicator shown above, is sold under a couple of brand names, and consists of a piece of thick cotton material to which glue is applied to stick it to the animal's back, a plastic envelope with a thin layer of foam on its inside, within which is a small tube of dye (now available in colours other than red) with a very small and obstructed opening.  When the animal is mounted by another, the dye tube is squashed and the dye begins to leak out, to soak into the foam in the plastic envelope, turning the indicator red.  If the animal is only partially mounted - for instance, when only just coming on heat - the indicator will usually only show a little of the dye stain.  If the animal is in full "standing heat", the indicator will be fully coloured, after being squashed for long periods, several times over.  It is when the standing heat occurs over night, or when one isn't watching, that the indicator comes into its own - I can then tell that it is time to inseminate the cow concerned, or that the bull has done his job.

In the afternoon after Stephan had come home from work and had his wee rest, we got the cows in again and drafted off 20 for Quadrille to service, brought Lendrich, the other bull who I'm not going to use again, in and put him in a small paddock with #358 (the previously sick steer who has never returned to the young mob) for company.

Erika said she'd cook dinner for us and bring it round, so while she prepared a HUGE pie for us all, Stephan and I went off to collect the semen bank - after transferring straws into it from two other banks.  As soon as we arrived home, I inseminated Queenly, who'd been on heat during the day, then finally sat down to a very nice dinner and some social relaxation.

Every early morning (and a couple of other times in the day) I now walk out to check on the cows, to see who is coming on heat, or has been on heat during the night, so needs inseminating as soon as possible.

On my way across the paddocks, I noticed three Pukeko dashing off and hiding (as well as Pukeko ever manage to hide) and so had a look for their nest.  One baby had hatched and immediately hopped out of the nest and came towards me. 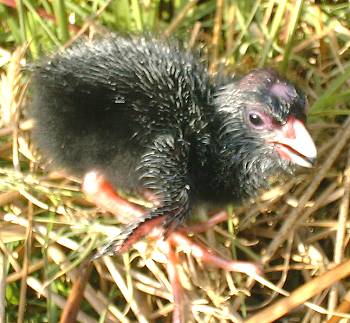 I quickly (after taking the photograph) ran away, so as to avoid the temptation to pick it up.

Neil and Laurence rounded up all the sheep again and we all drafted the lambs out for weighing and drenching, since they were well due for such a treatment.  Erika turned up just in time to help, even though I'm sure she came for a relaxed glass of wine! 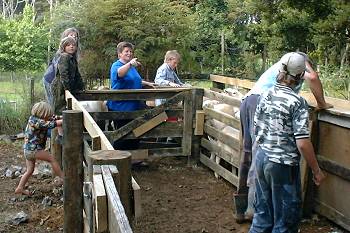 Before the lambs were drafted out, a couple of good-looking wethers (last year's lambs) were run up into the shearing pen in the cool, to await the end for one, to go on the spit tomorrow.

Time again, for the annual sheep-on-the-spit New Year's Eve Party!!!  Even with the best of intentions, we still only manage to telephone people at the last minute, so it's only those who either really want to come, or hadn't planned anything else, who turn up.  (I'm sure that sounds much better than "only the sad-sacks who had nowhere else to go" and naturally we all know we only hold a party ourselves because nobody will invite us to theirs!)

Fortunately for us, Erika went off and worked for Topmilk today, to do Stephan's milk-run around the Hokianga, so Stephan could stay at home and get ready for the party.  We were especially relieved when we heard that things had gone hay-wire at Topmilk and Erika would be delayed in getting home, by about four or five hours! 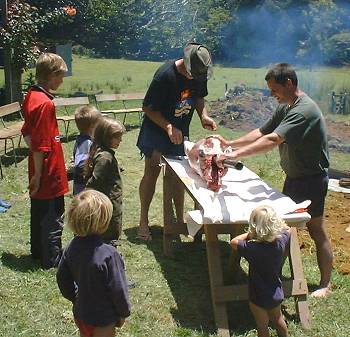 The fire was lit to prepare the embers necessary for cooking the sheep and the sheep was brought down from its cool hanging-place and coated with all sorts of herbs and marinade, then on it went.

Spit-roasting a sheep takes about four hours, so as long as the ember-heap under the sheep is kept at the right temperature, there's time to do other things ...

... some of which looked highly dangerous, not to mention ridiculous!

When it was ready, the sheep was carried off the spit and then carved up, for the assembled, hungry crowd. 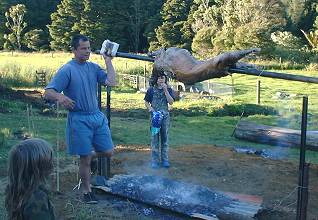 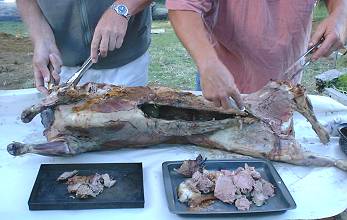 There were about 40 of us here, and all ate very well of roast mutton and vegetables, lovely salads and much celebratory wine flowed.  Afterwards, we shared the various desserts people had contributed, with the highlight being the chocolate and strawberry covered pavlova Simon, one of our friends, had made!  I think he could have made three and we'd have finished them all off - delicious!

We then sat around the fire, which was unfortunately stoked up by the children in a place we hadn't quite meant it to be, so we all spent the rest of the evening on a slope, rather than comfortably on the prepared flat part of the garden where the spit had been.  Some people went off home to their beds, but half of us stayed around the fire until after midnight and beyond.

The first day of the new year dawned with a brilliantly blue sky and sunshine.  We tidied up the mess from the party and sat around drinking coffee with those who'd stayed the night in bus and tent, some of whom were obviously feeling a bit the worse for wear!  Erika and I congratulated each other on our sensible approach to New Year's Eve drinking and enjoyed our clear heads and delight in the bright sunny morning!

Some people left and some didn't, and I went off and stuck some more indicators on some of the cows who had previously missed out when I ran out of them the other day.  Then we went to move some cattle, who'd had to wait an extra day while we were a bit too busy to get to them!  Stephan and some of the children went up the hill over the road, and I, on a borrowed bicycle, rode around to open the gate along the road, at the other end of the paddock and found this ... 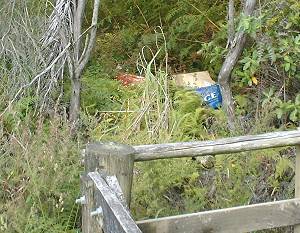 ... you would have to wonder at the mentality of the sort of people who do such things.  The boxes actually contain completely recyclable glass bottles, all alcoholic beverage containers, and were not unpleasant to drag out of the bushes, just annoying!  Why, if you're going to take the time and trouble to stash three boxes on somebody else's property, amongst the bushes, wouldn't you just take them to the recycling depot, or even put them tidily somewhere on the side of the road, if you're so lazy an individual?

Meanwhile, back at home ... 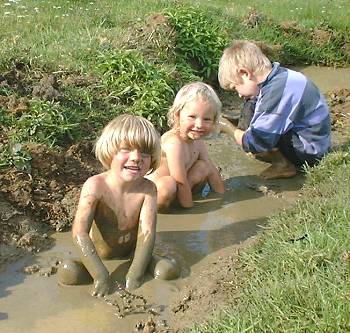 ... Ollie, Patrick and Dane found a lovely place to play, covering themselves and each other in cool mud.  They had to be hosed down and then seriously washed in the shower, after things got a bit rough and large lumps of mud started flying!