Here, at last, are the Pheasantams (or Phantams if you prefer)... 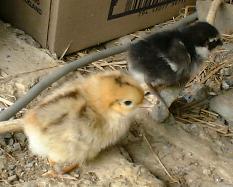 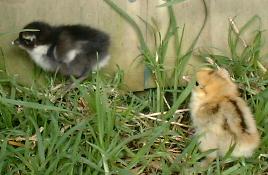 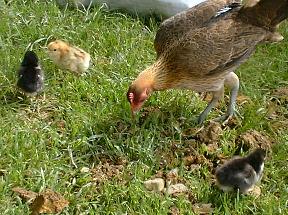 They look like chickens, except they don't appear to have combs (the fleshy bits on their heads) and the heads of the black ones are rather small. They make noises unlike chickens (I can't remember what pheasants sound like, but presume it's something like these babies).

As if it's not enough to have chickens perching in parts of our house and laying eggs under the bed, we now have... 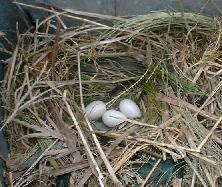 ...starlings in the mailbox!

I've been out "calf-whispering" with Isla's daughter. I had my first encounter with her a couple of weeks ago, when, as I was draped over Isla's back having a sort of cow-cuddle, I felt a nudge in the back of my leg and gradually managed to stroke the head of the inquisitive nudger. The next time I managed to stroke her for longer and further down her back. Yesterday I was able to approach her on her own in the paddock (previously she'd only let me near when next to Isla) and we had a bit of pushing play and she let me scratch around her head. Today I found her "ooh yes" spots (you'll know the human equivalent, the shoulder massage points and the spot you can't quite reach to itch on your back) which meant she'd stand still while I moved around her. Now I know why cattle show-people use their hooky-sticks to tickle the animals' underbellies; that's how they get them to stand there so placidly! All of this takes time which no doubt I could use more 'profitably', but this is the best bit of all the hard work and the isolation and living out in the mud! So, I'll sit on the ground out in my field and play with my calf for as long as it takes and the dishes can just sit on the bench.

Yesterday I made a huge learning leap in pregnancy diagnosis in the cows! I decided to see what I could feel in the autumn calving cows and heifers, since we had them in for a weigh and liver-fluke drench session. The first few put up with my probing arm with no result for me, until I suddenly discovered an actively moving foetal being! It fascinates me, being able to make such close contact with a small living developing creature who won't be seen in the world for months yet. Once I'd discovered where I would feel the calves in the cows, I was able to identify them in the rest I investigated... including, unfortunately, one small heifer from last year's calving, who just after they were weaned, jumped through an electric fence to the stud bull calves and one of those boys (at least) was obviously already fertile. That calf will have to come out very soon with the help of abortive injections, as the heifer is far too young to carry it to term, let alone birth a calf and raise it.

The other rather pleasant surprise is that I think Onix is pregnant. We gave her one shot at it with Bertrand last June, timed hopefully so that she would calve sometime around the end-of-term-one holidays next year, so Issa might be able to be here when she does. Onix, since then, has been on heat at least twice that I've seen (apparently this is quite common), but I'm pretty sure there's a calf in there. We'll confirm that diagnosis in the next week or so, when the vet visits. Issa is very pleased. 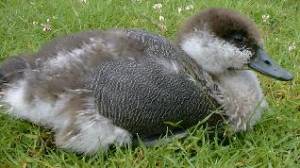 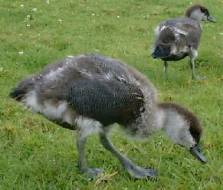 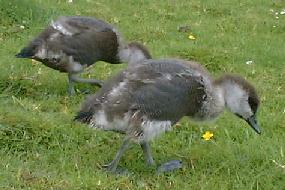 These pics above from 28th October and below, on Friday night 2nd November, up against the back door in the porch, amongst the shit (all theirs!) and gumboots (which they've not grown into yet).