The list of the entries received is available at the bottom of this page.
Saturday the 27th

There are thirteen calves on the farm so far, so this morning we went out across the paddock and combined two groups of them, in preparation for moving them out to some better grass.  As the cows have calved, I've moved those still-pregnant cows and heifers away to new paddocks, leaving the new calves (and their mothers, of course) where they were born, for the first two or three days, so they can "find their feet", and get over their inclination to bolt in stupid directions when approached.

The paddock into which I need to move them, is a little further out on the farm and needs some fencing repairs, so Stephan and Sebastian carried some tools and wire out to do that job while we were near that area. 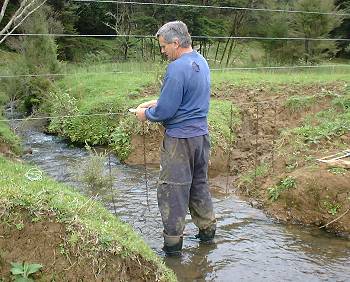 Using some pieces of old chain (which he'll have to replace with some galvanised chain at some point), Stephan constructed a barrier to the cattle who might try to go under the fence through the river.  When the fence is electrified, the cattle aren't too keen on coming into contact with it.
An electric fence shock feels very much like being hit by someone, when you're not expecting it!  It's not a dangerous type of shock, just an uncomfortable experience.  I quite often get shocks off the fences when I'm climbing through from one paddock to another - my cattle notebook makes a great insulator, but I'm not always careful enough.  A shock to the top of one's head is a particularly unpleasant experience, and has led to terrible consequences in summer time, like going home for a sit down and a beer or a Gin & tonic!

The fence through this area was a wreck for a long time and the cattle got used to being able to just walk through and over it, so when the new fence went in, they continued to push their way through, breaking wires and making a new mess!  Part of the problem has been caused by the electric fencing power being down, as we've been fixing things up at the front of the farm, and we also suspect that the fence's earthing system needs replacement.

While Stephan worked, Sebastian and I had some fun in the river, building a couple of dams.  We made a bit of a barrier across this part of the river, and then made some real water-tight rock and earth dams across a smaller trickle of water where it came down to the river.  Great fun - except I hadn't previously realised there's a hole in one of my boots! 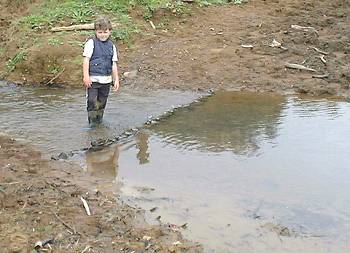 A dreadful day, weatherwise.  After several days and nights of warm temperatures, today has been horribly wet; so much so that I refrained from taking the camera out on my walks.

We all braved the rain this morning, and pushed ten cows and their calves across the river crossing we were working in yesterday.  Getting calves across such an area can be very tricky, but we managed it with little fuss, although we had to really physically push a few of the calves in the right direction, since they weren't too keen on getting into the water - it's only a few inches deep, but like everything in their lives at the moment, it's new and unknown.

Onix and the two other cows who had calved on Friday, were still in the paddock next to the one the others had now gone to, so I let them come out and go to the new grass too.  They left their calves sleeping, tucked away somewhere in the paddock they left and I knew that they would later return to where they'd left them.

Later in the day, about an hour before dark, I went to check the calves and cows, and to make sure that Onix and the other two cows had returned to their babies.  #94 had not done so and I hunted for her calf for half an hour, with an increasing sense of dread.  We'd had heavy rain during the afternoon and the river had risen and was flowing quite fast, so I began to wonder if the calf had tried to cross and been washed away.  Stephan and Sebastian appeared to see why I was still out there, and spotted the calf in a place I'd not even looked, since it wasn't somewhere I thought she could have got to.  It seems she may have taken a long route around the edge of the river from the other paddock to get to just the other side of the river from where the other calves were all gathered.  What a relief!

11pm: the power went off as I set out for my walk, in rain, wind, a horrible storm.  And in the corner of her paddock, in the midst of a lot of mud, was Isla... 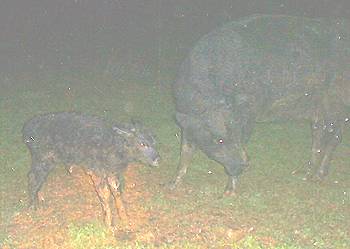 ... and her new-born bull calf.  I think he would have been born at around 10pm, because he had obviously already fed from one of Isla's teats when I arrived.  I stood huddled behind my flapping umbrella in a squall to take this photograph at 11.08pm.

Congratulations, and the prize for the 2003 Isla's Calving Date Competition, go to Liz of Ashhurst (which is about 500 miles south of here).

Last night was hideously rainy, with strong winds and I thought of Isla and her new boy out there in the cold dark, every time the wind woke me from sleep.  But this morning, between the cold showers, the sun shone for short periods. 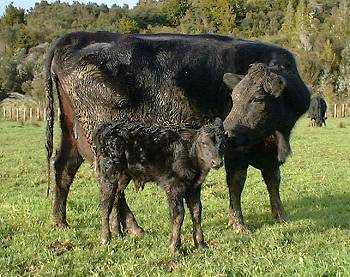 Further out on the farm, I checked to see that the little lost heifer from yesterday evening had joined the other calves.

I feel much more relaxed about these cows, now that we've managed to get them to some fresh and fast-growing grass, so they can maximise their milking potential and grow their calves well.

Later in the day, Stephan, Sebastian and I went walking and saw that #323 was in labour, so we sat down to watch.

I didn't think she'd take too long, this being her second calf, but there was a cold wind blowing and she was rather slow about it!  Eventually she pushed out a bull calf and we went home for tea.

#37 was already in labour when we left, so later I went back to check that all was well with her and then watched #117 have her calf too!  On some days they're popping out thick and fast!

We had some young visitors from down the road, so they came out to help move the young cattle from one side of the farm to the other.  I'm not sure if we've actually used this new part of the lane yet or not, but it sure makes things easier than they used to be!

Then we all went back to see Isla and her baby... 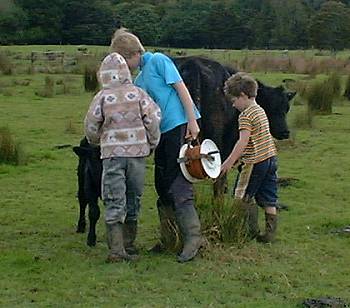 ... and then back to the house to play with the lambs. 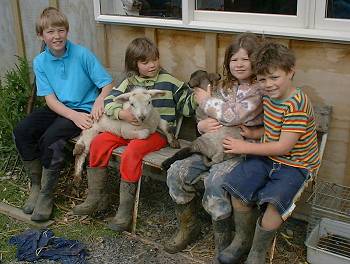 After the kids had gone home again, I went out to watch one of the heifers in labour.  She was doing very well, except she stood up before the calf was completely out, which confused her completely... 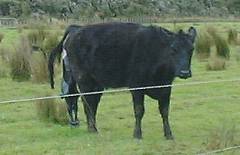 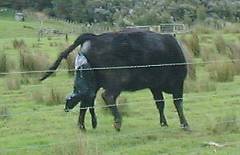 ... until the calf dropped on the ground and she was able to find it. 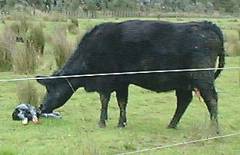 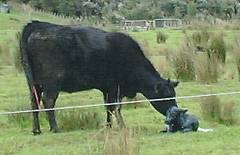 Stephan and I then went over the road to the hill paddock to bring back another five cows whose calving date is getting near. 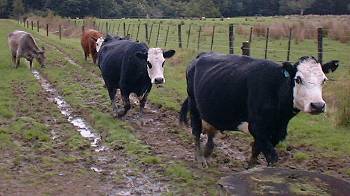 Wednesday the 1st of October

The children from down the road came to visit again and invited Sebastian to go and play at their place and then later to stay for the night.  Stephan and I, as very relieved and grateful holiday parents, ran away from all our responsibilities for the evening.  We threw the roast dinner Stephan had been cooking, onto the back of the ute and took it to share with his mother and friend.  We must have been the best smelling vehicle in the district - wafts of roast garlic on the breeze! 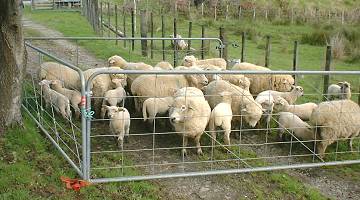 I've been wanting to catch the last of the lambs for docking for the last couple of weeks, so we set up some gates as a catching pen and took them all to it.  There were only seven lambs left to dock, so it didn't take very long.

Generally one person would hold the lambs while another does the ring applications, but I've become so used to doing it all on my own, so Stephan stood in the pen with the sheep and caught the lambs and I did the ring and tag application.

The small rubber ring is stretched with the four-pronged tool and then gently released to tighten around the top of the scrotum, or the tail. 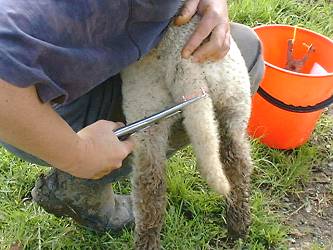 Then I put an ear-tag in one ear, so we can keep track of who's who over time. 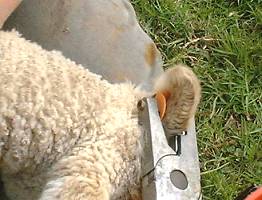 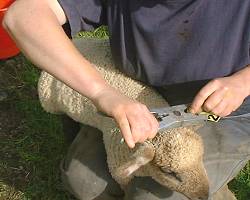 We awoke to yet more rain and Sebastian wasn't terribly keen on coming out for our walk, but five-year-old boys don't get much choice in such matters.  Along the way he decided to be very helpful, which I decided needed very strong encouragement, so when we got home, I made him a special certificate... 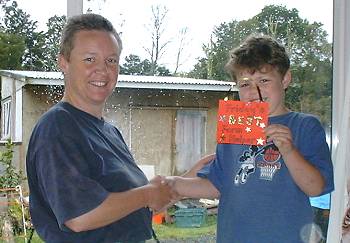 Here are the entries received and the winner is: