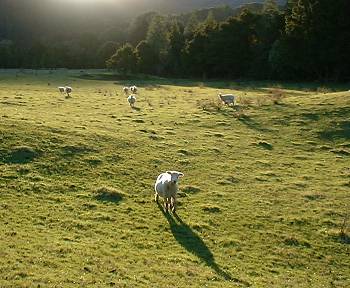 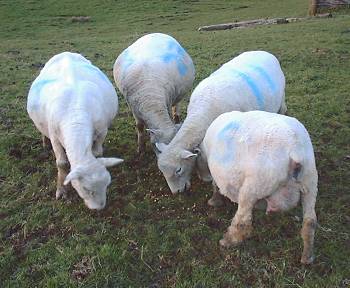 Most evenings I've been feeding the ewes a bit of maize.  They like it a lot and it makes catching them to assist with lambing much easier, should we need to do that. 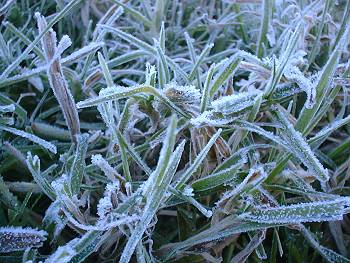 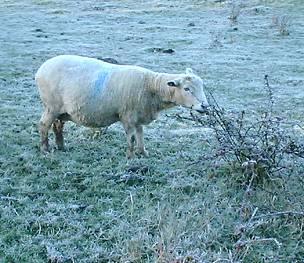 We awoke to an extremely cold morning, with a heavy frost and a temperature of -2.5°C.  We haven't had a cold morning like this since July 2001!  Most of the sheep were carefully nibbling at the blackberry leaves, since the grass was too cold to eat.  The Kikuyu grass will be heavily knocked by this.

Monday the 30th
Another frost, as cold as yesterday's!
Tuesday the 31st 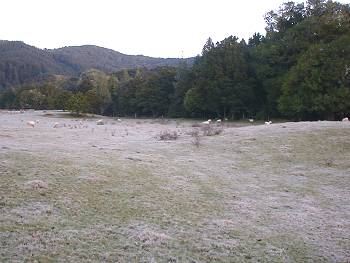 And another one!  This is getting tedious and worrying! 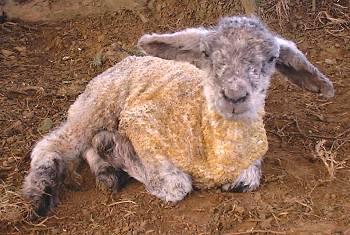 Late yesterday afternoon, Yvette started pacing the paddock and scraping the ground, in preparation for having her lamb/s.  By 7.30pm there was still no sign of a lamb-body emerging from hers, and the birth fluids were discoloured, so I intervened and assisted two ewe lambs into the cold night air!
Yvette has only ever had one large ram lamb at a time, so for her to have two ewes is rather a nice surprise. 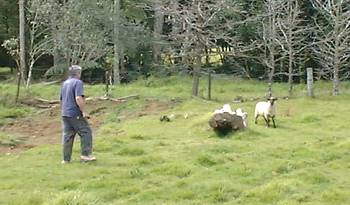 Bendy, the bottle-raised triplet of last year, has been causing us some frustration!  He keeps escaping from the paddock into which he's been put and wandering around wherever he chooses.  I suspect he'd eat our tree seedlings, given the chance, so we had to get him back to where he belonged and do some fence-hole blocking!  We've also been thinking some distinctly carnivorous thoughts. 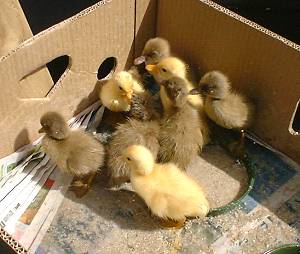 A neighbour from further up the valley said she had a number of ducks sitting and hatching clutches of ducklings, which are supposed to be mostly Khaki Campbell, with a spattering of Pekin.  The ducks were raising (and losing) the ducklings, so Jill gave me eight of one family, which I brought home and put in a box under a lamp.  I figure this saves me four weeks of waiting, while a clucky bantam or Muscovy hatches eggs from our own ducks.  I'm currently waiting for the possible hatching of the one surviving duckling from a clutch of four eggs I set almost a month ago.  If all goes well for that duckling, it'll join these ones for warmth and company.

Thursday the 2nd of September 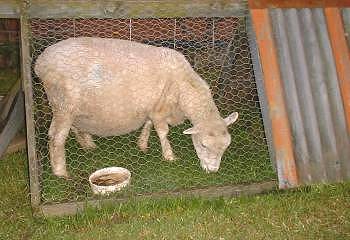 After three days' heavy frosts, the Kikuyu grass is bleached and disappearing and the other grasses have stopped growing!  The sheep are getting a bit hungry.

I watched in astonishment as Lulu pushed her way into this empty chicken cage just outside our house.  As there's no room for her to turn around, we lifted the cage and moved it out of the way, or no doubt we'd have had a broken cage to deal with, as she crashed her way back out again - or a distressed ewe, which would have done her no good in this late stage of her pregnancy!

The Isla Calving Date Competition will open on 18 September.  As I received only one contribution in response to my request for inspiration in regard to the prize we will offer this year, it will be a woolly hat!  If you have any other ideas, please email them to me, very soon!