When I was last in Auckland, I visited a woman I'd met through the Lifestyleblock.co.nz website discussion forum.  She gave me five Muscovy duck eggs to bring home and hatch.  I set them beneath a hen on the 24th of November and had thought them to be infertile, since when I had "candled" them (shone a torch through the shells one night to establish if there were any changes to the contents) I had seen no evidence of fertile development. 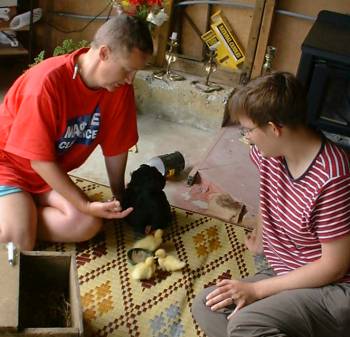 Then a couple of weeks later when I was checking some other eggs under other hens, I had another look at the duck eggs and discovered that three had developing ducklings within.
They began making hatching noises on Christmas morning.
By last Thursday evening, they were not making good progress.  They were still pecking and scratching away inside the eggs, but had been doing so for around 30 hours by then and I suspected that without assistance, they'd quite possibly never get out.  I very carefully broke the tops off their shells, leaving them to emerge fully in their own time, which two had done by morning.  The third was still partly curled in its shell and looking very droopy.  I worked on reviving them for some time, trying to get them moving and holding themselves upright, which worked quite quickly on one, but the other two weren't responding well at all.  I thought it likely that only one would survive, but after some hours and a series of different 'treatment' approaches, all three seemed to have come right. 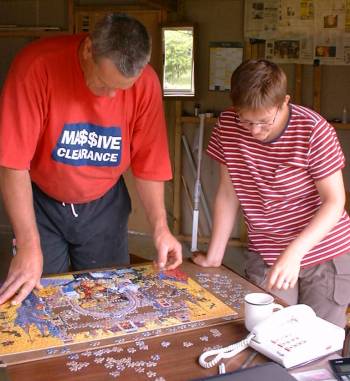 Since it's holiday time, we've been doing jigsaw puzzles.  This is number two for the week, a "wasgij" - the sort that comes in a box showing a picture of the people who are seeing what's in the picture in the puzzle, but we don't see the same view until we've finished the puzzle, if you see what I mean.
All sorts of people took part in its completion as they came and went during the days it took us to figure it out. 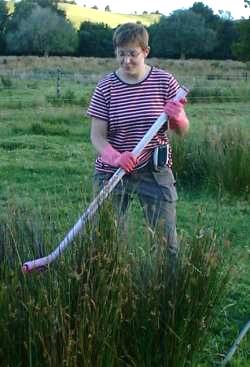 Gisela asked what she could do to contribute to the farm/household during her stay, so we introduced her to the weed-wand (a hollow tube with rope wicks along the bottom which are soaked with herbicide from within the tube).  Here she is dealing to some of the huge population of rushes we have around the farm.  It's a wonderful thing to have someone else doing this job, since killing rushes often slips off the priority list when there are other more pressing jobs to do.  It's also a very good job to be given in such a situation, since one can just go out and do it whenever one feels so inclined, without having to ask "what can I do?"

I suspect that this baby might be a bit confused about which red and black thing is its mother!  Sadly there are only the two left this morning, the third having died during the night. 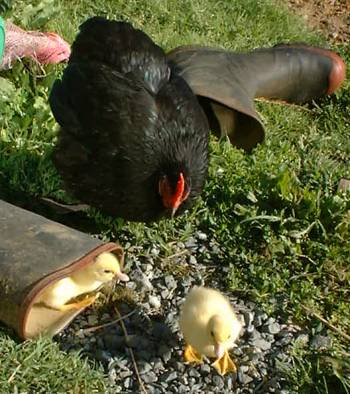 We decided that perhaps we could have a party for New Year's Eve and that we could spit roast a sheep for our guests.  So we spent some of the day making sure we'd invited the people we wanted to and then in the evening we got the sheep in and killed one for the spit.

Kursty, Daniel and Sebastian had arrived during the process and erected their tent out in the field and Sebastian spent a long time with Stephan in the yards, getting the sheep prepared.  He looked a bit cold after a while, since he'd removed his upper clothing and was copying Stephan's every move.  Sebastian is four and had obviously decided Stephan was a wonderful role model.  I really wish I'd come back for the camera! 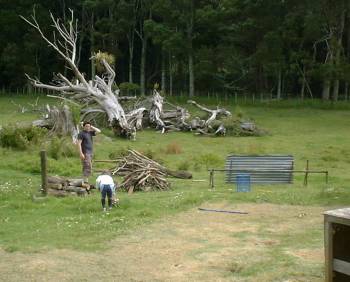 While Stephan was out at work for the morning, the rest of us got on with various tasks in preparation for the party later on.  Daniel's job was to get the spit fire ready for the sheep.  That meant setting up the machine to drive the spit during the cooking process, the shelter to stop the wind blowing all the heat away and the fire to create the coals to go under the sheep to cook it.  The coals are taken from the fire and placed under the sheep to give a good cooking heat without burning the meat. 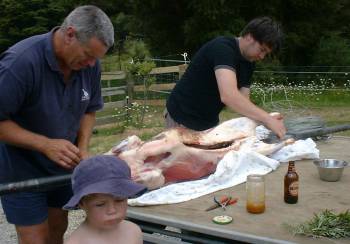 The sheep carcase was unhitched from its cool hanging place and made ready for cooking. 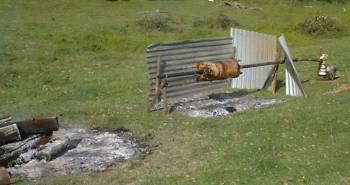 Then the sheep on the spit pole is connected to the drive shaft connected to the old washing machine ringer engine and the cooking process begins.  This photo was taken after about three hours of cooking. 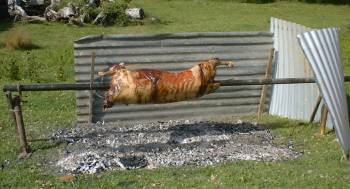 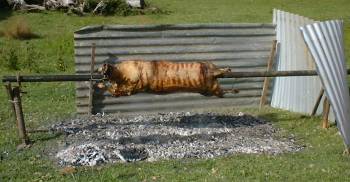 Daniel did a beautiful job, keeping the amount of coals just right for a good cooking temperature.  We set him up in the shade with a chair and a few beers while he did it. 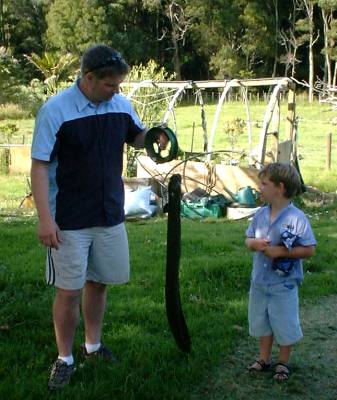 Meanwhile Samuel caught an eel or two (this one nearly as big as Sebastian), which he and Dan cooked in the embers beneath the sheep.  People began arriving and meeting each other and drinking nicely chilled beverages.

There were suddenly a lot of children in our trees... 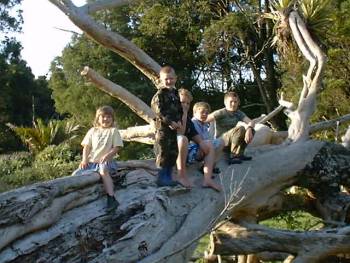 Kendra posed in her fabulous boots. 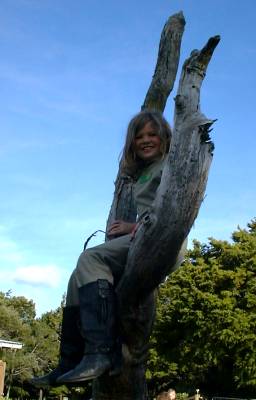 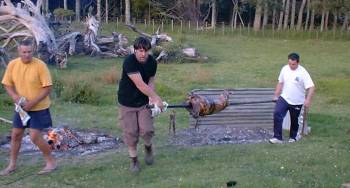 By just after 8pm it was time to take the sheep off the spit and get onto some serious eating! 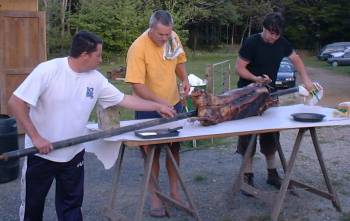 Our guests (about 36 of us altogether although I had thought we were a larger crowd!) had brought salads and other things to eat with the meal and Daniel and Stephan had cooked potatoes and kumara.

But first of course, the meat had to be cut off the sheep! 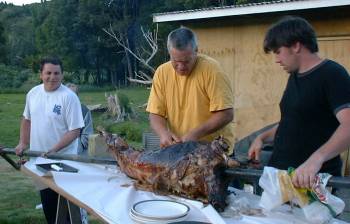 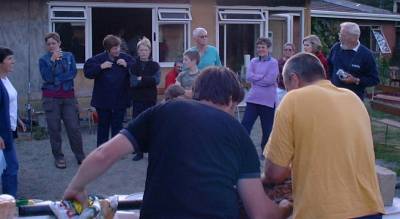 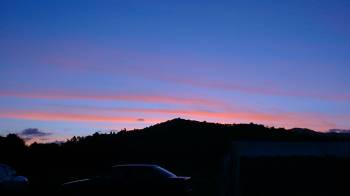 Then the sun set beautifully for the last night of the year. 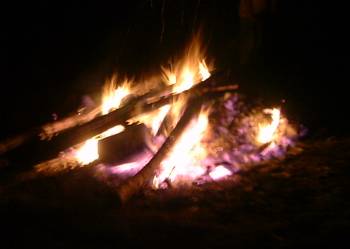 We kept the fire going until well after midnight, by which time the party had thinned considerably, except for a few stayers.

For Gisela the whole evening was rather strange.  She tells us that in Germany, the New Year's Eve celebration is called Sylvester and there are fireworks, sparkling wine at midnight and much excitement (and presumably it's quite cold).  Some of us here were barely able to stay awake long enough to see in the new year.  Daniel, for instance, after a hard afternoon's spit-duty, went off for a nap sometime during the evening and we didn't see him until the next day!

Other people just slept where they dropped, but I suppose that's to be expected when you're still quite young and out past midnight... 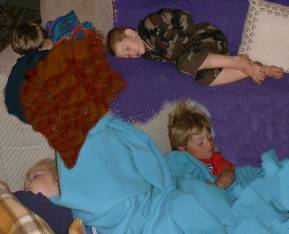