The A&P show was cancelled!  Such a thing has only happened twice before, in the 116 years of its existence.  Thank goodness we had decided not to take animals, or we'd have been up and getting ready for hours before we heard it was all off.

The rain fell all day.  We had visitors who hurredly had to leave just after 1 o'clock, as the river began to wash over the bridge and then the water just continued to rise.

We haven't had water this high for a while.

We had to do a couple of quick rescues of chickens in cages, including these babies, who were already up to their ankles in water when we got them out.  They spent the rest of the day and the night in the garage, out of the rain. 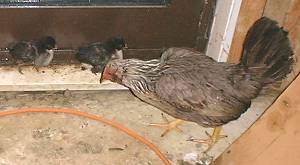 The steer who was stuck in the hole in January, has been gradually recovering, although the major swelling on his right side has continued to cause him pain, so that until last Friday, we had only seen him sit down once since we walked him back to the front of the farm.  I really don't think he has laid down in all that time, instead just resting one leg at a time, or going down on his front legs for short periods and resting his head on the ground.  By Friday, the stiff and dead skin over the swelling, had come loose - probably with some help from Isla, whom I have seen determinedly licking the steer during the weekend - which seems to have made him more comfortable, even though his injury now looks much more gruesome! 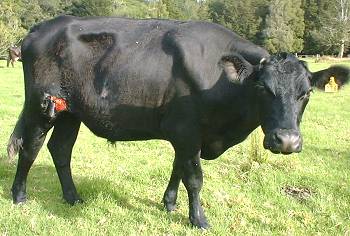 He has lost a lot of condition (weight) during the last four weeks, presumably because although he has continued to eat well, the energy requirements of constantly standing must be higher than those required by an animal who can rest by lying down.

I must assure anyone who feels this is a gross example of animal abuse, that we are in ongoing consultation with our Veterinarian.  (If I saw such an animal in a paddock, I'd be making enquiries about the nature of his care!)  I'm continuing to include pictures of this long recovery on the basis of that wonderful quote: "if you can't be a good example, be a horrible warning".  This is the sort of muscle damage which can occur when a large animal is down and unable to get up for too long and this is how long it can take to resolve - hoping that we do eventually have a positive resolution!

356 continues in good spirits and is eating constantly, although lying down a bit more often than the others in the paddock at present, presumably because he has some considerable catching up to do on his rest quota.

In all the gale-forced winds over the weekend, I thought we'd got off pretty lightly, with no obvious damage, until I spotted this... 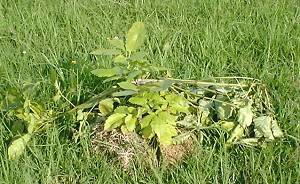 ... the small Puriri seedling I planted over the grave of my lovely cat, Cattin, last month, broken off about four inches from the ground!  We hadn't put any protection around it because it seemed to be coping quite well in the winds until this weekend, when the winds were from the opposite direction and much faster than usual.  I have cut the tree just below where it broke and hope that it will recover, although it will be a different shape from that I had imagined.

I brought the mob of 74 cows, calves and young stock in today and weighed everybody, then drafted the cows and calves off from the others.  The yarding and weighing is easiest to do alone, since the cattle are very quiet with only me in the yards.  The drafting really takes two, for efficiency, because there needs to be one person at the gate through which one wants the selected animals to go and one bringing those animals to the gate, which inevitably means a number of others want to go that way too.  I often draft small groups on my own, between the smaller yards, but in large groups, it just becomes hugely frustrating, so best left until there is a Stephan available.  We have, over the years, worked out how to work quite efficiently together.

#356 again, now the dead skin scab has fallen off his side altogether, exposing the flesh beneath.  It looks awful, but we've consulted the vet again and are applying the necessary treatments to aid his recovery. 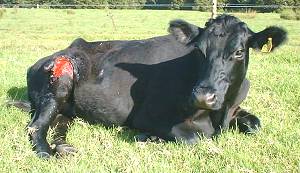 His posture is not usual for a cattle beast in this position.  His back legs are too straight, but since he's not spent a lot of time sitting down for several weeks, he's probably quite stiff.  It's a bit nerve-wracking watching him get up on his feet again, since he's unaccustomed to doing so and wobbles about alarmingly.

We moved the young stock, who we'd just shoved back over the road yesterday afternoon, along the short stretch of Diggers Valley Road from the bottom of the hill paddock to the one between the road and the river. 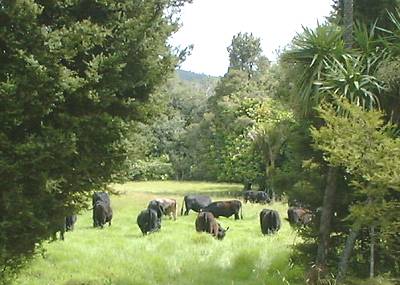 I very much like putting cattle in paddocks brimming with grass.  Because the season has been so very odd, the grass will not be of quite the quality I would hope, but it certainly needs grazing and these cattle will make a good start.  I'll have to follow up later with the cows, once they're weaned, to really clean up the pasture.

I moved the cows and calves out to the back of the farm yesterday, and this morning there was far too much noise coming from that direction, so I went out to see what the problem was.

The biggest noise was being made by Abigail, who was standing on one side of the swamp, yelling to Demelza, on the other.  The swamp is quite easily crossable by people with wide or long feet, but the cattle have to expend a bit more energy, since their narrow feet sink down through the mat of grasses and reeds on the top.  I don't think it's terribly deep, since they often graze there, quite happily. 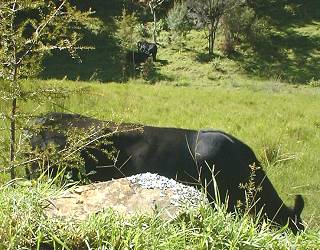 I quietly wandered up and around the paddock, doing the roll check in my note-book, to make sure everyone was alright.  There were little pockets of cows and calves all over the place, just sitting happily in the sunshine, or shade. 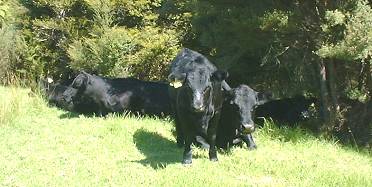 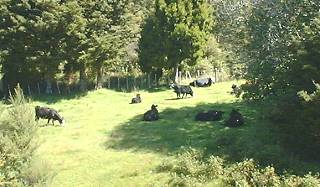 I couldn't find three or four of them, but since there was no noise from lost animals, I was not concerned.  It's hardly surprising that I miss the occasional one when they conceal themselves like this...

In the later afternoon, Stephan and I went down to Kohukohu to spend the night with Jill and Bruce at the Cottage, so we could all get an early start in the morning, for a trip to the Northland Field Days at Dargaville.

Up and away, on the first sailing of the Kohukohu-Rawene ferry across the Hokianga Harbour.  I love this crossing, it's a special part of the trip.  There has been much discussion and argument locally about the possibility of building a bridge across the harbour, but the route favoured by the authorities is not popular with the locals, since it would turn Rawene into a backwater, rather than the thriving tiny town it is, on one of the nicest tourist routes in the country.  When one has just missed the ferry, a bridge would be most welcome, but it's a good lesson in slowing down and letting go that constant sense of urgency, with which so many people live.  After all, what's an hour, in the wider scheme of thiings?  Last time we missed the ferry here, we sat and enjoyed a cool drink and then met four women on the ferry, of whom one was Gisela, our German friend who then came to stay with us for many lovely weeks. 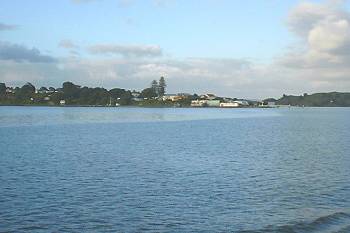 The main delight of taking this route to Dargaville is the trip through the Waipoua forest, a huge area of ancient Kauri trees (Agathis australis).  Kauri wood was much used in earlier times, particularly by pakeha (people of European descent) who used them for everything from house to boat building.  It is a lovely wood, but they're such impressive trees - I couldn't imagine felling one for the sake of the timber!  Stephan has a few peices of Kauri in his shed for turning, salvaged from old buildings and the like.  There is also much ancient timber being dragged out of old swamps in the far north, sites where the trees once grew, but died and fell naturally, thousands of years ago.

At the northern end of the forest, stands Tane Mahuta, the biggest of them all. 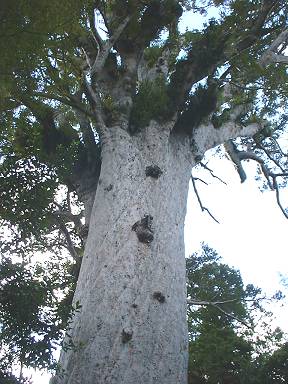 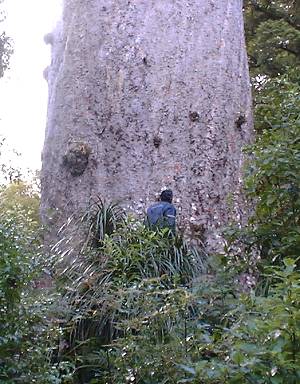 The tree is apparently around 2000 years old.  The picture on the right may give an indication of its size - the man at the bottom was on a personal quest in preparation for the Tangi (funeral) of his brother the following day.  In years past, people could just walk into the forest down a track to see Tane Mahuta, but then it was realised that the amount of foot traffic was beginning to damage the roots of the tree and so a boardwalk was constructed.

Looking back from the other side of the road and from a slight incline, the size of the tree is apparent, although a little difficult to convey here... 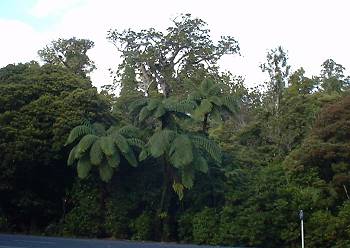 Kauri in a mature forest, are very untidy looking trees in comparison to other native bush, partly because they're so much bigger than everything else.  It wasn't until I'd spent some time becoming familiar with other native trees that I began to find Kauri so fascinating.

We spent most of the day at the Field Day; Jill and Bruce bought all sorts of things they needed and we collected information from a number of supply companies with which we have no direct contact up here.

These two plodded their way around the place all day long ... 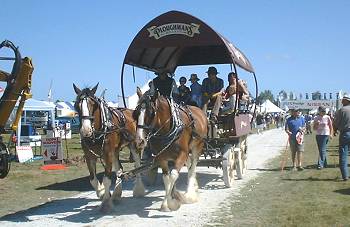