I like very much, seeing my big black friends outside my window.  There's Isla, helping mow the lawn. 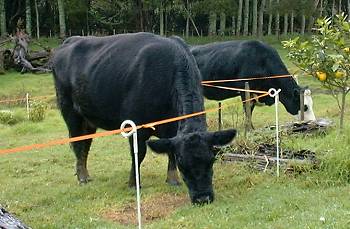 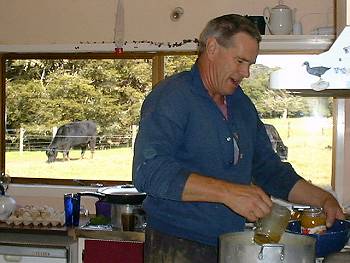 After collecting some fallen grapefruit from under the trees at the cottage in Kohukohu, Stephan looked up a recipe for marmalade and made several jarsful.  There's Isla, out the window again.

Wednesday the 6th of August

This morning, another bird tried to knock itself out on the kitchen window.  I have recently evicted several hundred spiders from that window and its frame, so perhaps the bird didn't realise the window is still there! 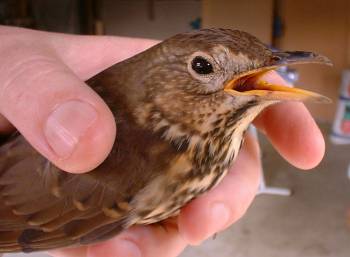 This time a thrush.  It was obviously quite shaken by its impact with the window.  I usually pick birds up when they do this, since I suspect their recovery might be better in a warm, calm, dark place, rather than out in the cold, at risk of discovery by a cat.  Often I wrap the bird in a soft cloth and put it in a small box in the hot-water cupboard, but I just held this one under my jersey until it started to make fluttering movements, at which time I took it outside and waited until it flew off my hand. 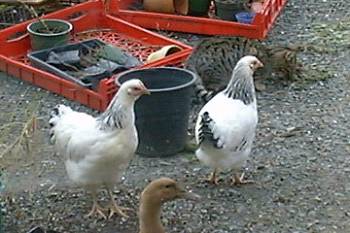 I believe this cat belonged to a neighbour who has left the house in which she lived, leaving the cat to fend for itself.  It is such irresponsibility which leads to the death of far too many native birds and insects in this country!  The cat has been sniffing around our house from time to time, for the last few weeks, since the neighbour left.  I will shoot it, when I get a good opportunity, but this wasn't it.  I'd pulled some catnip plants out of the garden earlier today and the cat discovered them.  Perhaps I'll be able to entice it back again with some more, later. 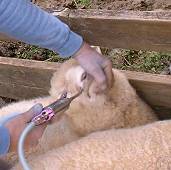 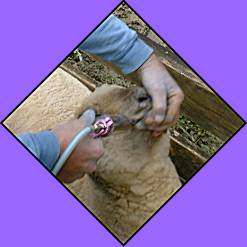 This afternoon we brought the ewes in to the yards, so we could give them a booster vaccination against various nasty diseases*.  If the ewes are vaccinated at the right time before lambing, the lambs acquire a certain amount of immunity from those diseases for the first few weeks of their lives, which means more lambs survive and we don't have to worry about quite so many things when they're born.

It was also a good opportunity to drench the sheep (there are still six of last year's lambs in the flock) for intestinal worms. 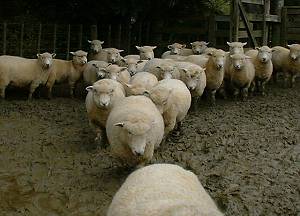 It's very muddy in the yards, especially after the cattle were all here the other day. 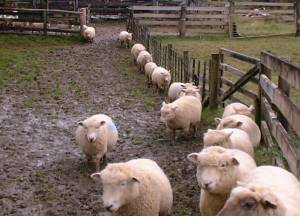 So where they can, the sheep stick to the hard or grassy bits, in this case where the cattle can't walk - very close to the fence!

We rubbed some blue raddle into the wool of some of the ewes, so that I should be able to see from a distance, who's who when they lamb in the next few weeks.  Some of them I know by sight, or can approach, but the numbers on the tags of the others are too faded to see unless one is very close.

This is number five of the seven chrysalids I rescued from outside, a few weeks ago.  This is only the second of them to emerge with properly formed wings.  The others I took outside and quickly killed, since they would otherwise just have slowly died in the cold.
They've taken a very long time to emerge and the cold has affected them, hence those with mal-formed wings.  There's one left hanging inside, in which I can see the coloured wings, so it must be ready to come out, unless it can't.  There are still several caterpillars and chrysalids on the plants outside, as well as butterflies from time to time laying fresh eggs.  Many of the chrysalids have been outside for too long and probably won't hatch, even if I bring them in.  I shall clear those off the plant, so that I can find and bring the fresh ones in as they form.

Some of the heifers over the road, getting close to the end of the grass in their paddock ...

This paddock, all 20+ acres of it, is one of the best pieces of land we have, in terms of its ability to feed and grow animals.  No matter what season, the animals come back from that paddock weighing more and looking better than they do from anywhere else.  So even when feed looks like it's getting quite short up there, it's possible for the cattle to continue to find enough to eat.