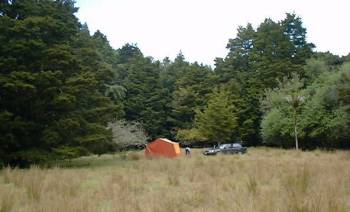 Easter and the beginning of the School holidays, brought us lots of visitors.  Some were offered indoor accommodation and others brought their own. 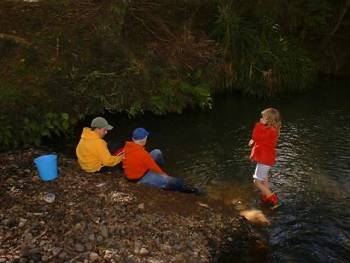 We had a bon-fire by the river near the tent one night, after a great big roast lamb dinner at our place.  Some of us went for some lovely walks and the children tried to catch eels.

One of the heifers very cooperatively had her calf one morning, although we all had to watch from afar through the binoculars, she being a bit shy since it was her first time.

Since we were hurtling toward the end of our financial year and the weaner calf fair had just provided the annual farm income, we had our big annual spend-up - well, actually it's still only really a medium one - and bought this fantastic pile of fence posts which Stephan will gradually erect around the farm to make my job increasingly easier.  Hurrah!!!  This equates to around four calves sold.  We do like it when the beef prices are good.

The vet came to call, to vaccinate our cattle against Leptospirosis, and while he was here, he did the pregnancy checks on all the breeding cows and heifers.  This is always an exciting time for me, when I discover how successful the last mating period was and get some idea to which bull each cow might be in calf.  Of course the real proof only comes with the birth-date of the calves when they're born (which then allows calculation of the actual conception date), but half the fun of this is the anticipation!  This year we did slightly better than last.  We have a couple of heifers who didn't get pregnant (one who I think is actually infertile and will thus end up on the tables of Auckland diners before too much longer) and one dear old cow, who has arthritic hips, and whom I would have nursed through another year, if she'd been in calf, but since she isn't, she'll be "put out of her misery" quite soon.  Another cow, who I'd presumed not in calf, proved to be, so she gets to stay.  I'm very pleased about her, I like her a lot.
I'm getting much "harder" in making decisions at this time of year.  It's really hard to have to send nice animals off to the works, but keeping a cow who isn't fertile, or who has problems getting or staying pregnant, isn't terribly economic.  Her place, and her feed, may as well be taken by another cow who can do the job she's here for. 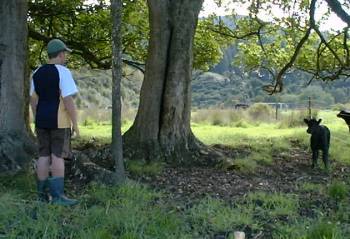 Issa (the boy with two cows) came up to see his new calf, who he's named Sapphire.

Jude helped us get the sheep in.... that's her, way out in front, with the bucket of maize.  We've been having a bad time with fly-strike.  Fit, healthy, clean-bottomed sheep, have been struck down by fly-attacks in the middle of their backs.  We are having to watch them very carefully. 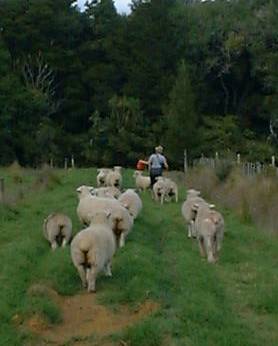