Big brave Stephan took up his spade and went into the garden with murder on his mind! 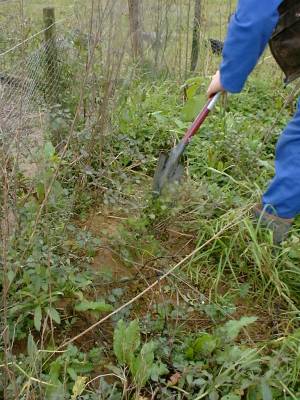 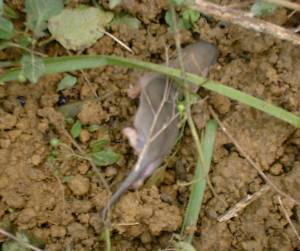 All that earth beneath the spade, has been excavated during the building of a huge rat's nest.  The boundary of the duck pond is prime real estate for a rat with an urge to extend her family and by the size of this one's dwelling, she was considering a considerable extension!  With much squeeking, the nest was put inside out and several new rat-children were dispatched.  We spotted big-mama rat, but she was a bit too quick and disappeared somewhere in the grass.  She'll get hers, too, one day.

The Paradise ducks, parents of Ms Duck, who nested in a tree at the end of our first paddock this time last year, are there again now.  Hopefully this year their babies won't hatch during a flood and end up thinking they have sheep for parents!

Stephan hosted a mini dinner party for his mother and brother, Andrew, on Tuesday evening.  He served a wonderful home-grown roast leg of mutton with a variety of roast vegetables, followed by his mouth-watering coffee liqueur cheese-cake.  The 'restaurant review' has not yet been submitted, but should it arrive, we will post it here. 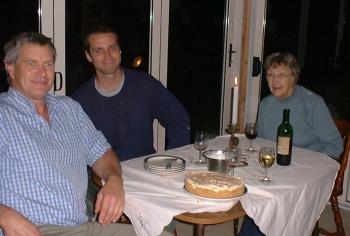 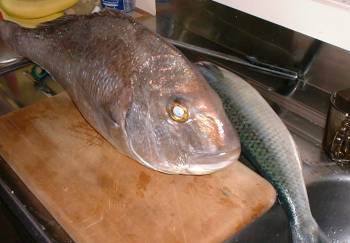 Would you believe these are the equivalent of a drake or two?  We have too many drakes in our duck-mob and a nice friend of ours likes to eat duck and also likes to go fishing.  Stephan didn't feel like plucking any more ducks, so we arranged a swap.  We haven't yet caught and delivered the drakes, but aim to do so soon.  In the mean time, we've had some lovely fish dinners.

Here are Ms Duck's parents on Friday, muscling in on her territory, which they presumably actually count as theirs.  (Photos taken through binoculars, hence the fuzziness.)

I've watched them approaching the house looking pretty aggressive, and Ms Duck usually retreats to the back porch, from where she just shouts at the intruders.  She has flown over and 'dive-bombed' them on a couple of occasions, and even had a physical confrontation with her father!