Early sunny mornings are really lovely times for walking, which of course I have to do regularly at present, to check if any of the cows are on heat and ready for insemination.

Here's #16 and her heifer calf, (sired by Merchiston Playboy by insemination last season) ... 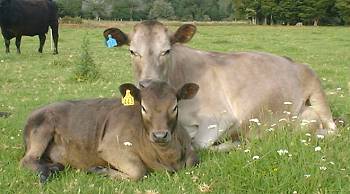 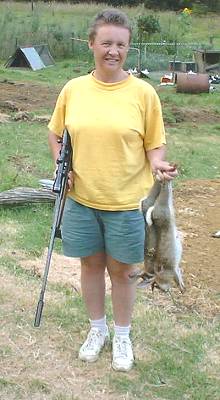 We were sitting around the kitchen table, gazing out at the green and the chickens heading off to bed and Erika said "look, there's a rabbit for Laurence's dinner" (Laurence particularly likes rabbit caserole).  I shot it and its friend just sat there, waiting, so I shot it too and Erika went home with dinner for the whole family!

What can I say, except I'm obviously a crack shot?  I feel a bit uncomfortable about killing things, in that whatever the creature is, it's just doing its own thing, minding its own business and then I go and shoot it.  But, if it's a rabbit, then I want to keep the population fairly low, since they eat a lot of grass and in too large numbers can become a problem.  Opossums are easy - I'll run them over, chase them with lumps of wood, whatever I have to hand, since they do so much damage to the bush around us - but then again, they're just doing what they do to live too.  I love my cows, but I still send them off on trucks when their time comes.  One day I'll be dead too. 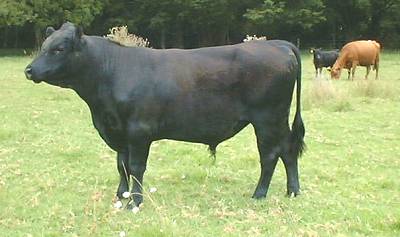 Crispin is turning into a fine fellow, out with his small herd of cows.  So far he's still very placid and apart from the occasional bit of silly behaviour, when he's herded all his cows into one corner in a paddock and prevented them from moving away, his behaviour is reasonably acceptable.  The bulls can be really stupid when I try to move them along the lanes or even just into a neighbouring paddock, stopping the cows from going past them and running ahead and chasing them back when they do.  It's very irritating, when I just want to move them quietly from one place to the next!