We weighed and weaned the last of the calves.  This lot are the twins, Isla's and Flower's daughters, the "backwards baby" and one other.

For those who are interested in such things, their weaning weights were as follows:

Their average daily weight gain was 1.08kg, which is a little below the rest of the calves' average, but not too bad, considering the twins had a fairly slow start with Ivy being in such low condition by the time she calved.

Ms Duck is still being harassed by the wild Paradise ducks.  Her friends, the Muscovy ducks, now come in to help her out, seeing off the invaders.  The Paradise duck in the picture is a wild one, not our friend. 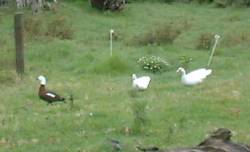 We went down the east coast, back to the Takou Bay Angus Stud, who were selling some cows which had failed to get in calf this year.  Several are cows from the two studs (Maunu and Taurikura) from which I bought my original stud cows.  (See the Angus Stud pages for more information.) 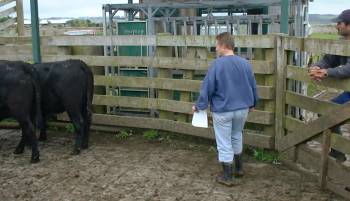 I had spent much of the weekend checking out the pedigrees and growth figures for the cows on offer, short-listing seven I wanted to look at.  Of those, we selected three: one each from the Taurikura and Maunu studs, and one bred by Takou Bay stud.

The rest of the week I spent in the tiny village of Kohukohu on the northern side of the Hokianga Harbour.  I went to spend some time working with a great pile of family photographs, scanning them all and storing them digitally.

Because the chicks were still quite small, I took them with me, with a cat-cage for their safety.  They seemed very happy in the sunshine on the small deck at the cottage and even happier in the little porch in the sun, but out of the wind, so I left them there and went off with Jill and Bruce for a trip on the ferry to Rawene.  But on our return, we discovered a large black cat (not Foxton Beach) lying on top of the cage, and no longer five, but only three little chicks cowering within.  The cat, who's home is next door to the cottage, had fished two of the bantam chicks out with a claw.  He'd eaten only the head of my favourite one.  I buried the rest of it under a kowhai tree.  The other chick was presumably entirely within the cat.

The bad cat's human brought me a lovely card and presented me with a small book to say sorry for her pet's wicked behaviour.  A very thoughtful touch, considering that that's just what cats do, if they're not trained otherwise.

To console myself, I continued meeting the faces of much loved dead relatives (and those of many still living).  I uncovered evidence of my early exploitation as child labour ... (a bit of self-indulgence follows) ... 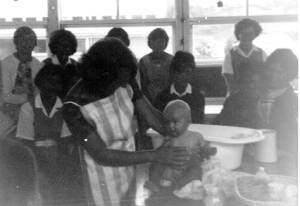 Within my first few months, I was exposed as a child model, to assist in training young women in one of the few likely options for their future employment: motherhood.

Jill taught at Kaeo District High School for a few weeks, occasionally taking me with her in the back of her Morris Mini car.  I think on this day she was demonstrating during a "Domestic Science" lesson, sometime during 1966. 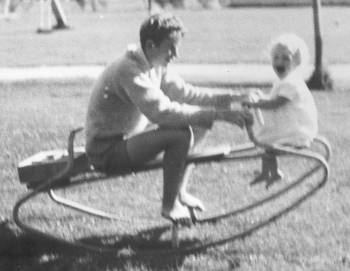 Tied to the end of a garden ornament, I was used as a deadweight for my elder brother, Bruce's exploits as a wild rocker.

I've included this picture because it's one of the few I found of Bruce, who was killed at 21 by a drunk driver.  I remember him as a most delightful person. 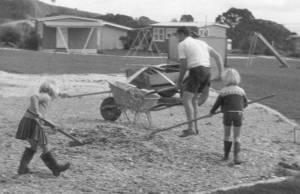 Later we had to earn our keep, re-shelling the parking area for the newly expanded Pamir Restaurant.  (Back in the days when one could take shell and sand from the local beaches, within the law.)

Brian and Jill Renner opened the Pamir Restaurant in the grounds of Motel Pamir, at Coopers Beach, in the late 1960s.  The restaurant was in Le Cordon Bleu style and was held in high regard all over Northland.  Jill and Brian had run the motel with Brian's parents for several years prior to their opening the restaurant.