These three weeks combined, not because we've not been doing anything, but because we've been doing too much for me to have sat down and recorded much of it.  (And then the programme I usually use to make the photographs small enough for these pages had a hiccup and doesn't work properly any more!)

These were the weeks in which we did some necessary jobs with the cattle: drenching them for Liver Fluke (which would otherwise make them lose weight and become quite ill over time) and getting the new calves in for their first (in most cases) weighing, vaccinations and ear-tagging.

The vet came to give the yearling heifers a jab to prevent any of them becoming pregnant after one of the bulls went for a wander out to the back of the farm.  If any of the two-year-olds have become pregnant, they'll just calve a few weeks early next spring; but I wish to determine the timing more carefully for the younger ones, most of whom won't meet the bull officially until next year.

While the vet was here, I got him to check the autumn calving cows and heifers and to confirm that Onix is indeed pregnant!  Issa is thrilled.  (I was surprised, having seen Onix "on heat" at least twice since mating time.)

A further most urgent task was to select the bulls from which I wish to procure semen for mating the stud cows this season, a job which I usually take care of sometime in August, but due to busyness, health concerns and disorganisation, I have left it until the last minute.  That just really means I pay more for the semen than I might otherwise have done.  No matter, the decision has been made and the semen should arrive in time for the start of our mating programme on Saturday 1st December. 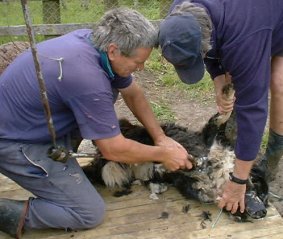 This is the latest new service we offer:
Dog Shearing 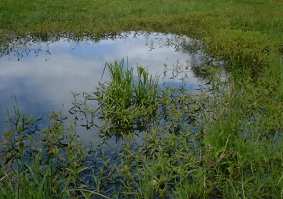 Although they are not visible, either in the photo or when standing next to this glorified puddle, there are frogs in here.  This fact is significant because we have not heard or seen any frogs on our farm for the last three years.  We are very glad they're back.

These are the starlings in their mailbox home.  We've had to build and install a new mailbox next to the one in which these birds now live.  Yes, we know most people wouldn't put up with this nonsense and would have thrown them out long ago, but we're quite enjoying the novelty of yet more extended family members.  This was when they were five days old, having hatched on Friday 9 November.  Their eyes opened at one week and they're now, another week from this photo, moving around quite freely in the mailbox, although there are now only three.  We're not sure where the other one went, but presumably a parent carried a body away at some point. 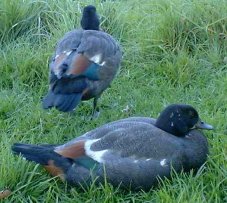 The Paradise Ducklings just keep on growing.  In the foreground, the previously smaller of the two, still sporting a few tufts of down around the head.

When they were little, both birds were the same size.  At a couple of weeks old, one began to grow noticeably larger than the other (they were distinguishable from each other because one had extra white on its back).  Over the last couple of weeks (weeks 7 and 8 of their lives) the slower growing of the two has overtaken the other in size, although has been slower to grow all his (?) feathers.  The female (?) and now smaller bird, has developed a different sound under the cheeping and is beginning to show more white around her bill and eyelids and has had, since they both grew feathers, lighter brown breast feathers.  The back of her (?) neck appears to be a lighter colour too, which would support my suspicions that she's she.

Both birds have been stretching their glorious wings and flapping about the place.  Presumably any day now, they'll accidentally fall off the ground and discover flight.