Mr Ram is having the time of his life!  His front foot is still a bit sore, but better than it was.  He doesn't appear to have let that discomfort deflect him from the task of the moment. 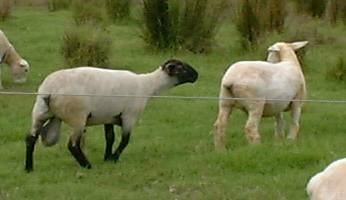 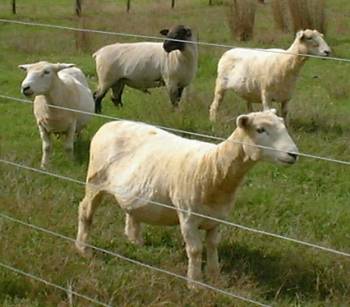 Despite it being a terrible season here for growing tomatoes, those which have survived the rain and the beetles make wonderful relish.  Here is Stephan's effort of this afternoon. 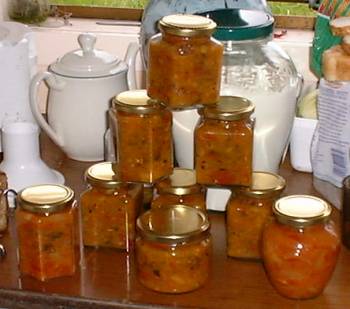 I decided on a wee trip away on Sunday, since today was the day for the second Northland Women in Farming day.  I spent the night in Kohukohu, got up early and met a very nice milk delivery man (Stephan, of course) for coffee at one of the places to which he delivers milk in the village.  After breakfast, I set off up the road for the short trip to the venue for the day's meeting.

There were lots of us in attendance and we had a great day with a couple of speakers, lots of talking amongst ourselves (comparing notes on how we farm, things we know or wanted to know, getting to know one another) and then a wander around our host's calf-rearing facilities.

The part of the day I found most interesting was Trisha Fisk's talk about her research into organic farming methods for a book she has been writing.  It was most interesting to hear about her impressions, as a conventional methods farmer, of organics and the science behind it.

The meetings thus far have been great for me, probably to a large extent because, since I no longer work at school, I've had a lot less social contact in recent weeks.  It's also very refreshing to have a number of women with whom to talk farming.

Then I drove all the way home, had a bite to eat, and got all the cattle in to weigh them ready for tomorrow...

Today is the day!  (Liver-Fluke day, that is.)  We got up early and started on the odds-and-ends mobs, i.e. the bulls and Ivy's little family.  We often leave the small mobs until last and then we're so tired that the extra walking required seems simply too much. 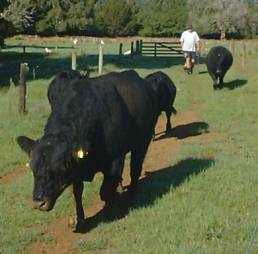 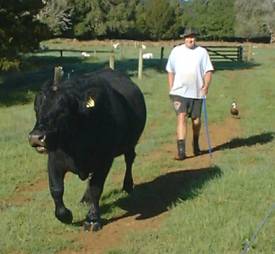 Stephan went out to get the boys.  Lendrich is the first (left photo), with Crispin and Bernard (our just-one-year-old bulls) tucked in behind him.  Quadrille is at the back with Stephan and the duck.

After a bit of bother we managed to get the drench into the two big boys.  They've developed such enormous necks and heads, that there's little room in the race to reach down and get the drench gun and attached hook around into their mouths.  It's a job which requires a great deal of care, since one of the ways cattle try to avoid being given what we want to administer, is to bring their heads suddenly up from near the ground, which if you're leaning over the top of them, could cause severe injury!  They also shake their heads around and snort and carry on.

Then, after doing Ivy and the calves, it was time to bring the large mob across the river from Jane's paddocks and get on with the real work. 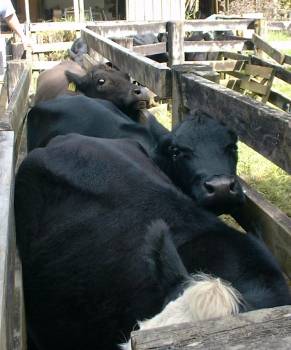 This is the race in which the cows line up to have things done to them.  We can fit three cows (sometimes only two with the largest of them) into the easiest part of the race in which to work.  We slide a bar in behind the back of the last one so they can't back out again.  I think the biggest stress for them in this procedure is our proximity, rather than anything we do to them.

We stand and walk on the "catwalk" along the side of the race, while we do whatever work is required.  We do it all as quickly as possible, since we want to keep the animals' stress to a minimum.

The cows look pretty alarmed and uncomfortable in this picture, but they're safe and actually not too squashed.  They tend to either ride their heads up along the tops of the cows in front or put them down beside the legs of the one ahead of them.  There's enough room to change position and move around a bit.

The back cow in the race is 357, who is now two and a half years old, born of an orange cow with a white face and a pedigree Angus bull.  It is her hair which is the background for this page.  She was incredibly cute as a calf, with her tightly curled coat, which looked like steel wool.  She's always been called Fuzzy as a result.

After we'd finished the drenching, we separated seven of the calves from their mothers and weaned them.  This lot were a lot quieter than the steers we weaned three weeks ago.  I suspect that when there are more of them in the group they suffer some sort of mass hysteria and upset each other for longer than they need.  Thus we had only one noisy night this time.