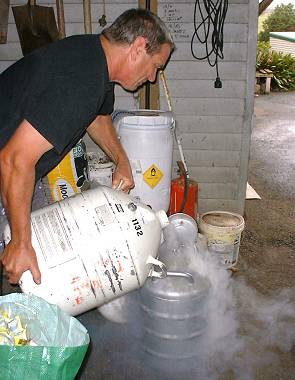 I measured the level of the liquid Nitrogen in the semen bank during the weekend and discovered that it had dropped far enough to warrant a refill.  I phoned and checked that I could get some more Nitrogen from Brian, who works as an AB Technician throughout most of the year and at this time of year holds a larger Nitrogen bottle to replenish his and the other couple of banks which continue to be used in the area, mine included.  We set off in the early evening, so as to miss the hottest part of the day.
Stephan did the pouring, since he was the biggest and strongest present.  Naturally he was wearing his special safety footwear, of the personally fitted human-skin kind.  One tries to advise caution and an appropriate wardrobe at all times, but obviously fails miserably.

Last year Erika and Graham gave me a small refrigerator, which had been sitting outside their house for some time, unused.  It still worked, so we set about bending the ice-box within, being very careful not to rupture any of the refrigerant pipes, so that the semen bank could fit inside it.  I'd long theorised that refrigeration would slow down the evaporation of Nitrogen from the bank and, last year, that certainly proved true, extending my usual refill period to beyond six weeks.  We picked up the bank this year about seven weeks ago and it would probably last another couple of weeks, but I've given myself enough frights in the past with nearly thawed semen and so we decided to refill now.

Having slipped behind in the weekly update production, I stopped taking photographs during the week!  Other than wandering about with the herbicidal granules designed to kill ragwort and thistles and continually watching the insemination cattle, there wasn't a lot happening anyway.  The grass grew like crazy and it was supremely hot and humid.

I managed to kill off a couple of the largest sparrows by accidentally shutting the lid of the chilli-bin overnight and thereby suffocating them, about which I was very sad.  It was one of those "just didn't think" moments when I was going to bed rather too late.  One lives and learns. 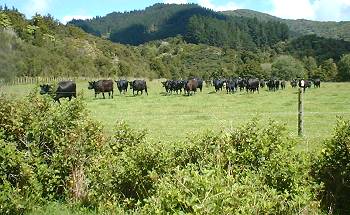 The grazing rotation has taken the insemination mob back to the large paddock which has no trees, so I've had to arrange for it to be grazed during the night and on cloudy, cooler days.  Having left the cattle there after my early morning check, I had to go out and move them when the sky cleared a bit later on.  They didn't quite seem to get the idea - maybe they were befuddled by the heat!  Eventually, with a lot of walking up and down and calling, a couple of them spotted what I was getting at and away they all went!  Cows can be a bit stupid at times.

Stephan and I actually got into the river this afternoon!  Mike, Chantelle and the boys came out for a swim and we decided to join them.  It was ... refreshing!  It's actually the second time this summer I've been in, for the first time in about four years, which probably says a lot about the last few summers' cool temperatures and the heat of this one!

I went out this evening to check on Arran 20 and his cows and while I was wandering around the paddock, I could hear what sounded a bit like a Californian Quail calling in the bush on the hillside in the next paddock.  Because it continued for so long, I began to wonder what it actually was, so when I'd found all the cows, I went up to seek it out.

The noise stopped as I approached, but started again in response to a quiet whistle, and there, on the bank was a tiny kitten, calling out with a volume quite astonishing for one so small!  It moved away as I approached it and disappeared under a large log, but reappeared as I whistled to it.  I was a bit nervous about picking it up because I have experienced the extreme sharpness of small feral kittens in the past and lost far too much blood at a most inconvenient moment!  This one looked much younger than the fierce little devil I had the earlier experience with, so I picked it up and carried it back down to where I'd parked the bike. 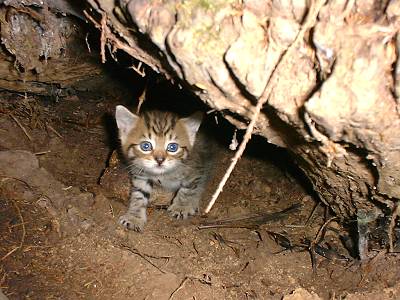 Strapping it onto the carrier with the bungee cords didn't seem a likely option, so I wrapped the kitten in my shirt and put the whole lot in my upside-down hat on front of the bike.  Naturally the squirmy little thing found its way out of the shirt and nearly came to a squishy end beneath a wheel, but with several stops to rewrap, we made it home.  Stephan, having seen me stopping on my way home, was in the house miming questions to me as I approached: bird, rabbit?  I think he gave up trying to mime an opossum.  Very comical!

I knew there were feral cats in that paddock, having seen at least one kitten on a couple of occasions, but both sightings were of black cats.  I haven't seen such a prettily coloured feral cat around here before.  I sincerely hope that it was alone there because the rest of its family met with a fatal accident!  We might have to go hunting before any other survivors get older and more agile.

This little kitten seems very sociable for a feral cat - usually they hiss and fight if you go near them - but perhaps because this one is so young, it hasn't yet developed those unfriendly tendencies.  I brought it home for two reasons: because it is a very cute baby and because I couldn't leave it there, since if it managed to survive, it would continue to add to the feral cat population, which detracts from that of the native birds.

Bearing in mind the time of the year, Muriel, who was visiting this evening, suggested we call it Valentine.  I think that will do nicely. 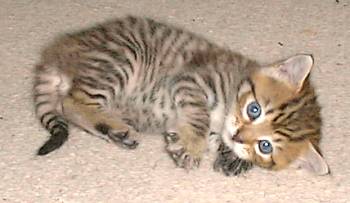 I'm going to try very hard not to swamp the page with cute kitten pictures.  I've never liked kittens overly much, mostly because they're so demanding!  Their playfulness is entertaining for a while, but the 'accidents' and destructiveness of some of the play is rather trying.  This feeling probably explains my choice not to have children either!

I have no idea how old this creature is, except she (until evidence to the contrary arises) is pretty wobbly on her legs and if I go further than a few feet away, she can't see me.  I presume she's not more than about four weeks old, but then I may be quite wrong.

I've spent quite a bit of time this week settling the kitten into her new life.  I hadn't realised that kittens need a lactose-free milk formula, so we obtained some from the vet on Monday and then worked out how to feed her.  I got hold of an old homeopathic remedy dropper bottle, took the glass dropper part out, cut a tiny hole in the top of the rubber squeezy bit and there was the kitten's feed bottle!  The 'teat' was a bit big, but she's managing very well.  I've decided she can't have been any more than three weeks old on Sunday when I found her, from observing her and consulting with people familiar with young kittens.

Some of the sheep have been twitching in that particular manner which indicates they may well be fly-struck, so we got them in to shear them this evening.  Chantelle, Mike and the boys came to watch, although I think the boys were more impressed with being able to have close contact with the animals than with the shearing.

While they were all busily engaged with the sheep, I got on with weighing and drenching the calves of the cull cow mob. 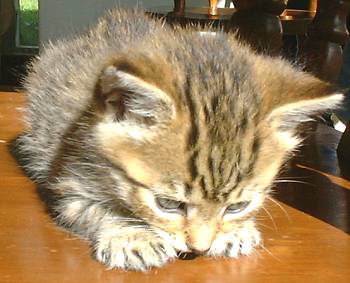 Announcement: Rock stars can do it, so can small cats.  The Kitten Formerly Known As Valentine, shall henceforth be called Spice.  It's shorter, has nice consonant sounds for attracting her attention and she has all those nice spicy colours in her fur!

We had to go in to town (Kaitaia) this afternoon, so I took Spice with us to get a hands-on opinion of her probable age.  Catherine at TopVets confirmed that she's about three to four weeks old and that we're doing all the right things.

Finally, this evening, two of the three cows which haven't yet been on heat this season were actively trying to mount each other.  Watching a couple of hot cows together is quite funny - both trying to get around behind the other, running in circles.  Because we planned to go out to the North Hokianga A&P Show tomorrow morning, I brought the mob in to the yards, weighed and drenched the calves, then left them all grazing in the driveway until the morning, so I could keep an eye on the heat progress and do the inseminations, first thing.