At last, Isla has produced her calf, at 8.36 this morning, a heifer. 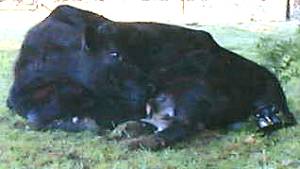 Leaking milk all over the place, Isla cleaned herself up.  (I hope she doesn't make this a habit.) 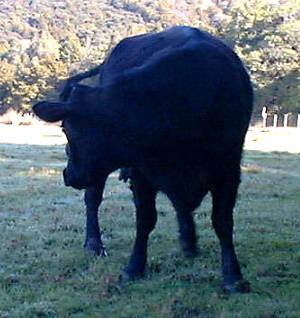 She was quite confused at this stage, turning around and around looking for the calf she was sure she'd already had, since she could smell all the fluids on the ground. 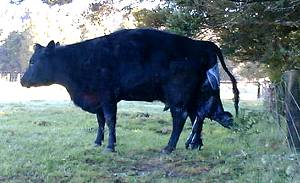 After lying down and getting on with the business of pushing for a while and then hearing her baby gasping and snorting behind her, she got up for a look, but still couldn't find her!  The calf soon fell directly on top of the thistle plant beneath her and far too close to the fence.  Cows really don't seem to consider these things carefully enough. 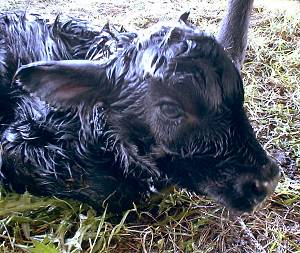 Nobody correctly guessed the birth day.  Grant, who's met Isla, but still had no more idea than anyone else, including me, was closest with 4 October.  I'll post his prize acceptance at a later date.  Thank you to all those who entered.

Today I had a close look at one of the big Puriri trees we fenced off from the stock last year.  I had read recently about the lifecycle of the Puriri Moth, Aenetus virescens, which spends about five years of its life within the trunk of the Puriri tree, before motamorphosing into the moth and living for only a couple of days/nights - or less if spotted by our wicked FoxtonBeach cat!  I saw what looked like a chrysalis case sticking out of a hole in the tree, so pulled, very gently, and this is what I had...

This morning I looked out the window to see if the cows were doing anything interesting and saw not cows, but WILD PIGS!  So, we took the rifle and went out after them.  I happen to be an excellent shot, and promptly saw to four of the babies you may have seen in a picture a couple of weeks ago, and the aunty-pig with them.
Thus, I have shot and killed more pigs than all of the pig-hunters who've come here, put together!

There are still one or two of the white and black spotted ones out there.  Jane thought she saw one run across the paddock when we were out this afternoon.

Wild pigs cause an enormous amount of damage to our pastures, and wreak havoc in native bush, so we're keen to eliminate them from our area.  We have to work against some hunters who catch live pigs from other areas and release them in our locality, or even breed them in captivity for such release.  Hunters we know of who do such things are not welcome here, but we have little chance of stopping them.  Pig hunters are unlikely to kill the piglets, since that's not their "sport".  For me it is simple pest eradication, in the same way we hunt the opossum and feral cats.

... later on, we went looking for the source of a very unpleasant and strong dead-smell, along the riverbank not far from the house.  We found....

....absolute proof of the demise of Agent Orange!

Who was Agent Orange? 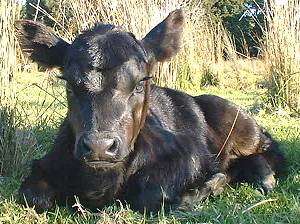 Here's the lovely wee Amelia, Isla's daughter, this afternoon.
She has the most beautifully curled eyelashes.  Ridiculously 'pretty'.

This morning, Ivy (Isla's 13 year old mother, one of the first two stud cows I bought) started looking uncomfortable.  Ivy has for the last three years, calved on the 280th day of her pregnancy, so I wasn't expecting her to calve for at least another week.  She has been looking far too thin for my liking, during the latter part of her pregnancy, despite being provided with the best of the grass on the farm, so I checked on her from time to time during the day. 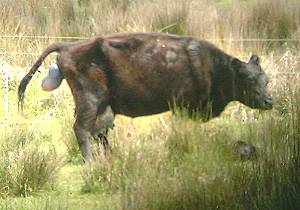 At around lunch-time she was most definitely in labour and some time later when I looked out to see how she was doing, I saw her in this state, so went in for a closer look.
(The calf with her is Amelia.) 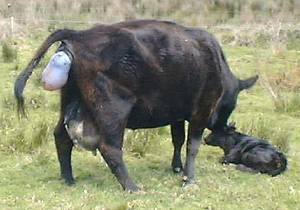 On closer inspection, I could see only one front leg and the head, all rather wrongly positioned.  So we began the tortuous trek to the yards.  Ivy is a complete pain to move when she has a new calf, or thinks she does.  Because she'd been in labour for a while, she had decided that she'd had her calf and Amelia was it!  So we had to take Ivy, Isla and Amelia in.  Poor little Amelia hasn't been a terribly energetic calf and wasn't very cooperative and was also constantly put off by Ivy's bellowing and running toward her anytime she was separated from her.
We had to be pretty quick and careful to stay out of Ivy's way when she rushed at us in protective fury, if we got between her and Amelia.
All the way in, I was preparing myself for the birth of a possibly dead calf, since the head was obviously surrounded by fluid and I couldn't know if the umbilical cord was still providing its oxygen needs. 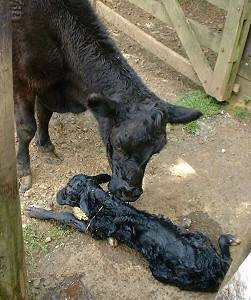 We put Ivy up the race in the yards and with an arm well washed and covered in lube, I went in for a feel.  As soon as we pulled the membranes from its head, the calf gasped and moved around, so hope returned!  The other leg was just tucked back and there was actually enough room to gently pull the calf out, without having to straighten out the leg.  Presumably Ivy may have been able to do that herself, eventually, but it might have taken too long for her or the calf.
We both held onto it as I eased it out, and then laid it on the ground and let Ivy out of the gate so she could turn around, and we got smartly out of the way!
Then we realised that it would be pretty silly not to weigh the calf, since she was lying right next to the platform scales, so we locked Ivy out again for a moment and took care of that.  One stud heifer (again), birth weight 28.3kg, which is pretty light for Ivy, but I haven't used the bull before, and didn't know how big his calf might be.

I was delighted, since Ivy is always possibly producing her last calf, being advanced in age, and obviously not capable of holding her condition well any more.

I was taking photos and enjoying watching Ivy at close quarters, with the safety of a solid wooden gate between us, when Stephan suddenly asked........ 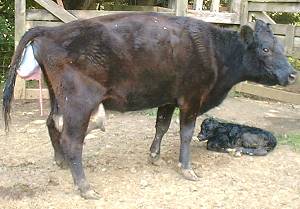 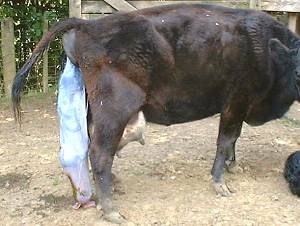 And so we watched in ecstatic astonishment as what 'that' was, became very clear!
Some nervousness set in as I realised that since we had a heifer already, the next calf had to be a heifer as well, for the calves to be of any potential use for breeding.  Twins of differing sex are called freemartins, the heifer being infertile in 90% of such cases and the bull, I understand, being probably sub-fertile. 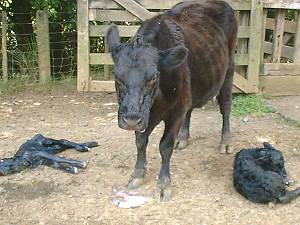 All is well, two heifers on the ground, both alive and, despite Ivy standing on each of them as she dealt with her confusion and distress (at being in such close confines with us at such a time), both able to get up on their feet quite quickly.
We weighed the second calf when Ivy was turned away with the first: 24.9kg.  A total 53.2kg of calves, compared with her usual 40-42kg single calf.  Suddenly her thinness is explained.  She must have been working pretty hard to build these two beautiful babies!

I suddenly realised it was all very well weighing the calves, but we needed to be able to tell them apart.  I painted one and then had to weigh her again to make sure she was the small one, as I had thought. 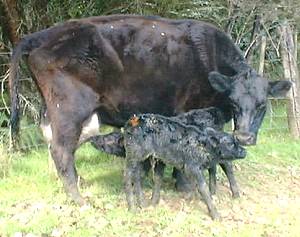 There have never been twins here before, so this event is pretty special, especially so since Ivy really won't be having many more calves and she's such a good cow.