Rachel and Issa went home on Saturday and we got on with what we ordinarily do.  Elsie (our second cat) finally showed up on Sunday, having spent over a week away from home because Phoebe (Jude's dog) had been to stay.  I heard, and then saw her, half way up a huge Puriri tree up in the area where most of the chickens live.  She wasn't too sure about coming home, but has taken up residence properly again since then.

I spent several days watching the last two (stud) heifers who were nearing their calving due-dates.  That sort of watching, for me, usually includes a late-night check before bed-time, just to make sure they've not begun anything I should know about.  Finally, Quean 03 went into labour, just before dark on Tuesday evening.  I kept popping out for a look at her and expected to begin seeing some progress before it got terribly late.  Progress there was, but not quite as expected.  Normally there'll be fluid, mucous and possibly membrane tissue appearing, but it's usually all clear or colourless.  The only times I've ever seen anything bloody at that stage of labour, has been when something hasn't been going quite right, and things didn't look like they should have in this case.  Because Quean is one of the stud heifers, a first-timer and a little younger than we often calve them, we called on the vet for some assistance.  So, at around 10pm, he helped her deliver a 30kg bull calf, which she promptly licked clean and fed, and all appears well! 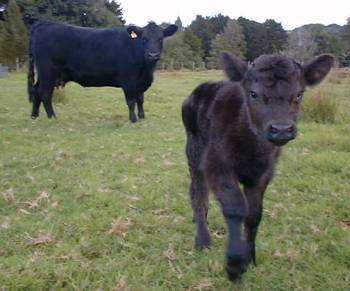 We figure the evening's entertainment will cost us not too much more than we could have spent on a slap-up meal and a night in a swanky hotel and at least we have both mother and calf in good shape.  I don't know why things weren't going ok for her; the calf was in the correct position and there was plenty of room for it to get out, but she just wasn't doing it.  She might have carried on and birthed her son successfully, or we might have discovered her unable to walk, with a dead calf by the morning. 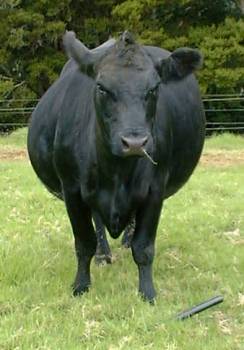 I carried on watching Iona (the other heifer) with amazement, as she seemed to grow bigger and bigger every day.  She eventually calved sometime early on Thursday morning, a day earlier than the beginning or her due period.  Out of this enormous body, came one bull calf.  He weighed 34kg, which for a heifer here, having one of Bertrand's calves, is pretty big.
Bertrand's calves' gestation period is in many cases shorter than the usual 275-290 days.  On average, his calves are born four days earlier than our previous bull's calves.

So, that's it for the Autumn calving.  (#79 is still to calve, but she's way out of line with everybody else, due sometime during June.)  This will be the last autumn calving we do, since I've discovered it's quite hard work feeding these cows well enough over the winter and early spring.  I initiated Autumn calving when we had some cows who weren't pregnant after the summer mating period about four years ago, which I didn't want to cull from the herd at the time, but which I also didn't want to carry through for another whole year without having calves.  But the autumn calving cows become the priority mob for feeding at a time when we need to be weaning last spring's calves who are the upcoming "replacement" heifers to go into the breeding herd and which consequently ought to be the best fed, just at the time when the grass growth begins to slow.

Once these calves are weaned, I'll send the older cows away, since a couple of them have been here as adults for as long as I have, so they must be at least nine years old, which, although not ancient in cow terms, is getting on a bit for a hard-working breeding cow.  The three youngest heifers will automatically go on into the spring calving herd, after a bit of a break, and the fate of the others will depend entirely on their performance with these calves.  If they do an outstanding job, I might let them stay.  Anything less and I will recall that they are only in this mob because they missed getting pregnant at the right time in a previous season, which only didn't lead to a trip on a truck at that time, because I'm way too soft!