Suddenly this afternoon, children and strange cattle appeared in our yards!  Neil (he's one of the seven children from down the road) and I had discussed the possibility of one of our bulls going to live at their place for a while, to impregnate their heifers and to eat their grass instead of ours, so today they walked their cattle up the road to collect him. 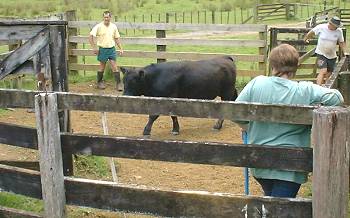 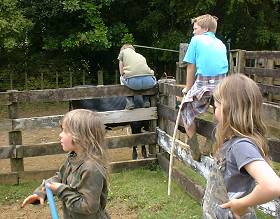 Virago Bernard 12 is the bull and today he is 608 days old, which means he is due to be weighed, so we got the scales ready and weighed him and the children's cattle as well.

When we let Bernard out, there was a bit of this ... 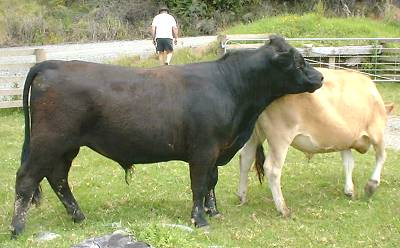 ... and then they all went down the road. 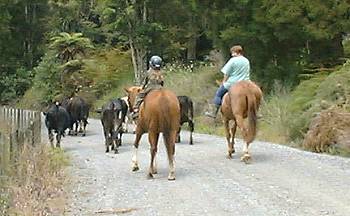 There are only two heifers amongst the six animals with which Bernard now lives.  All of them were raised by the family from four-day-old calves and are the calves of Friesian and Jersey dairy cows.
Bernard will stay with them until he's big enough to go to the works since I don't wish to use him for breeding.

I went home and spent some time with the pottery wheel, trying out some new clay, which I'm finding much easier to use than the last lot I had. 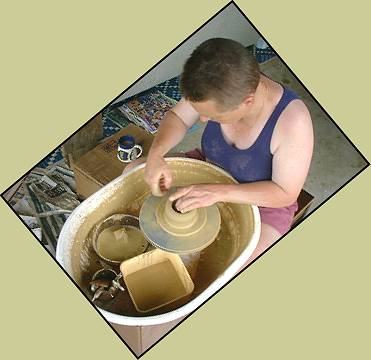 Later, in a similarly creative vein, I finished a knitted top for Jill, in a lovely cotton yarn.  It didn't take long to make, but I'd left it sitting, unfinished, for several days, after I'd sewn a seam incorrectly and needed to undo and then resew it.  Jill kept asking where it was - a bit cheeky, considering it was a gift! 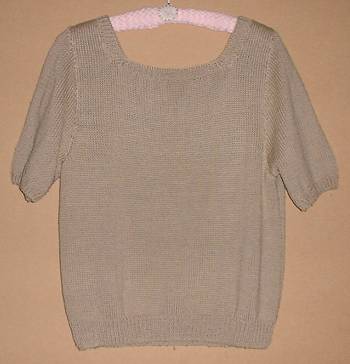 It's always a bit difficult, at this time of the year, to keep up with everything which needs to be done, and the camera has usually been left sitting alone, so there are no pictures from the last few days!  We've been doing a lot of socialising and quite a bit of tidying up around the place, as we usually do in preparation for our New Year's Eve party (as well as the various numbers of guests who may turn up over the whole summer period).

We got the mob of 25 calves in to the yards and weighed them for their second time and administered the booster vaccine shot.  On entering their weight data into the computer later, it appears they're all suffering a bit from the lack of feed over the last few weeks, their mothers not producing as much milk as they would have done on more feed.  The reduction isn't huge, but 200 grams per day less growth, over six weeks or so, means they're all about 8kg lighter than they might have been, but they'll soon catch up as the weather warms and the grass growth picks up.

In the evening, we decided we'd go down the road and visit the neighbours, since they were having a bon-fire.  There turned out to be several fires, surrounded by various numbers of children with sausages on sticks ... 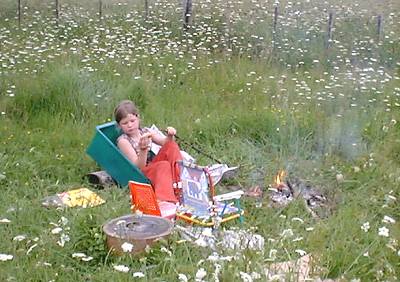 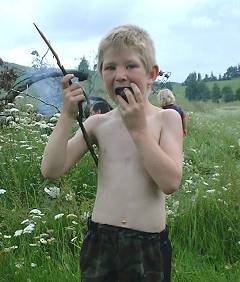 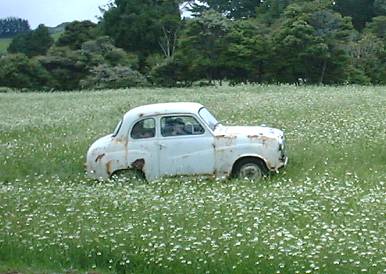 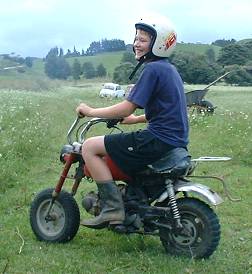 Laurence and Neil were hooning around the paddock (quite sensibly and under close supervision, of course) in their little car, which seemed at times to almost disappear in the high carrot weed growing in the paddock.  There were motorised vehicles all over the place!

After a good amount of very welcome rain, the weather has been very warm and extremely humid, which has been fantastic for growing grass.  One of the first-calf heifers appeared to have suffered a metabolic upset from the change in feed quality, spending a couple of days in obvious discomfort, which I carefully observed and discussed with the vet and some farming friends.  I moved the cows from the very lush paddock they were then in, to the one near the house, so I could provide some treatment and keep a close eye on her.  The "Farmer's Veterinary Guide", to which I often refer, recommended treatment with Epsom Salts and Molasses, so I provided both to all the cows, since feeding one is almost impossible, due to several of them knowing exactly what might be in a blue plastic container! 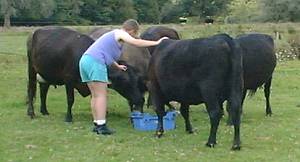 I may have to nominate this photo for the "most unflattering picture of the year" prize!  It's the singlet, I tell you, not me! 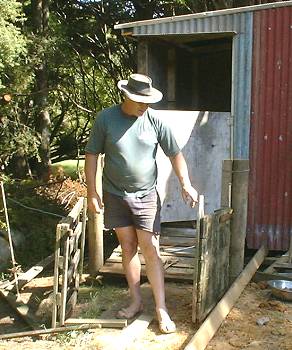 Stephan, with lots of help from Neil, has been building a proper sheep-shearing area in the shed, with accompanying purpose-built yards.  For years we've been managing with tied-together gates and the shearing machine bolted to the back of the truck, but on hot or showery days, it was all quite unsatisfactory. 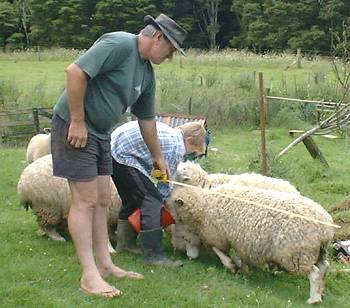 The weighing part of the sheep-race needs to be the right size, so the two of them arranged some sheep measuring.

We went to shear the rest of Ronnie's sheep.  Ronnie lives about 20 minutes from us by car and has about the same number of sheep as we do.  Stephan had shorn the ewes a few weeks ago, and the rest had just had to wait until the weather was suitable and they were all rounded up for his next visit. 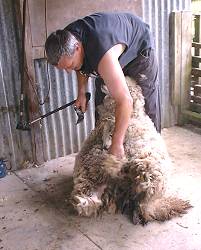 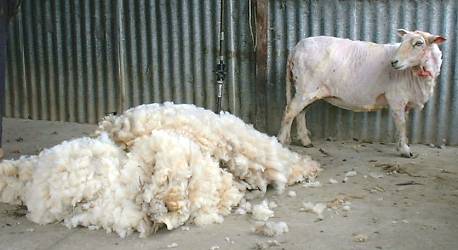 This is Lambie, who is an Awassi cross (hence the accidental cut to her surprisingly fleshy neck flap!) and thinks she's a cow.  Because she insists on living only with the cattle, I think she missed out on being shorn when the rest of the mob was done last, so there was a huge pile of wool. 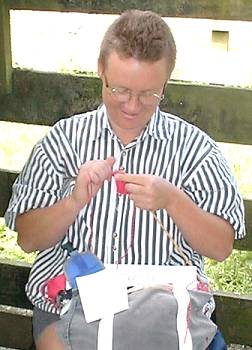 Meanwhile I knitted, something I often do but not usually with sheep occasionally jumping over me in alarmed attempts at escape!

On our way home, we called in on Sid, who is an apiarist (bee-keeper) and was busily harvesting honey from hive boxes brought in from various fields.  Sid's bees have at times resided on our place, so he's often invited us to go and collect some honey from him and today we actually remembered to take some containers with us to do so.

There were bees all over the place - a bit unnerving for me, since I have a moderate allergic reaction to bee stings! - and the smell was delicious.

Sid was taking each frame, on which the bees build the wax comb structure, from the hive boxes, then scraping a lot of the honey off the frames before placing them in the centrifuge to spin the rest out.  The Manuka honey is apparently very thick, but gets more liquid with agitation, so he was scraping more than he would with other types of honey. 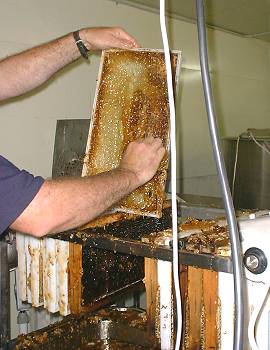 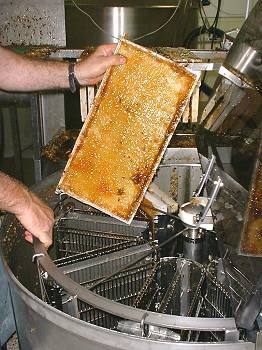 The honey is pumped from wherever it is collected - either from the sink over which he was scraping, or from the centrifuge - to the large vats.  (A hive box with frames still in place, is in the foreground, below.) 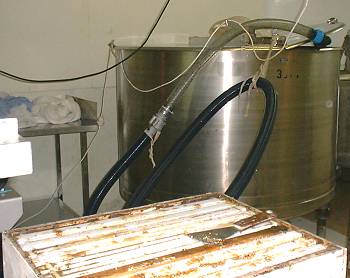 I am very fond of honey, so being in the midst of so much is quite a treat.  It's also a great privilege to be able to source one's food products from places like this and not just from a supermarket shelf, with little idea of the origin of the food, nor the processes to which it may have been subjected. 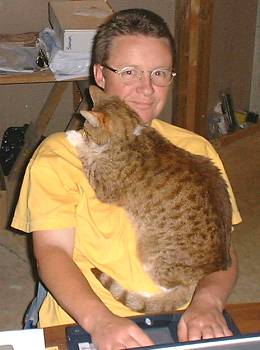 My dear old Cattin, who's now over 13, has been getting very thin and has been ill, of late.  He's taken to sleeping on the newly installed dining room table, from which warm and comfortable position I can't bear to make him move, unless absolutely necessary.

He has always been a shoulder cat, and in just the right position, will sit quite comfortably as he is in this picture, although there's a certain amount of support being provided by my left arm, which isn't overly convenient for typing!