Stephan borrowed the tractor-pulled back-blade from Kees and Lynn the other day, and is out improving the tracks and making new ones.  We hope to get the fertilizer on this week, and the better the tracks, the further we can get the fert truck.

At around 4 o'clock we set out for Oruru near Peria, about 35 minutes away, to attend a movie at the Swamp Palace cinema.  The cinema seats just over 70 people and occupies the old Oruru community hall.  It is the only cinema in the area, the next being Kaikohe (I presume there's one there) or Kerikeri, both over an hour away. 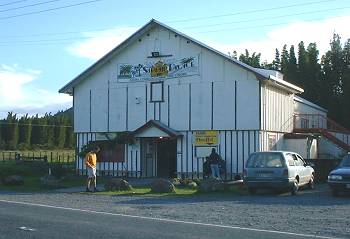 We saw a film called "Travelling Birds", about birds in migration, using bird-carried cameras to film birds in flight.  I spent the first half of the film being sadly reminded of our beautiful duck.  We both felt we were less entranced by the movie than others who'd seen and recommended it, because we have had such close contact with a large flying bird, whom we watched at every opportunity and at such close proximity.  The film's scenery was pretty spectacular in places and the photography was rather special.

I went out to move all the cows around at the back of the farm, after a couple of days of leaving them to their own lives.  One lot were all where they should have been and happily moved from one paddock to the next.  Then I climed the hills and called all the cows and calves up to the top of the huge paddock in which they've been for several days.  There was a lot of noise and a few animals came up to the gate, so I let them through, then walked around a while looking for the others. 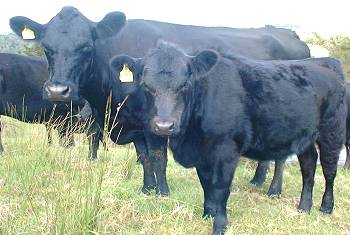 Here's Onix, with this year's calf, #456, who Issa has not named!  I think she's a better calf than Sapphire, Onix's first.

Eventually almost everyone had arrived up at the gate and been let through, except that Abigail and Demelza were amongst the few still not there, and I couldn't hear either of them calling - Abigail's call, like that of her mother Isla and grandmother Ivy, can be distinguished from those of all the other cows.  I get a bit nervous about missing animals, especially after our recent experience with the stuck steer, so I set off down the hill and around the bottom of the paddock, hunting through all the gulleys and the swamp, back up the other side to the gate again, collecting a couple of other stragglers, but still no favourite two.  I still couldn't hear anything of them, so set off for the bottom gate again, wondering if they'd somehow found a way out of the paddock. 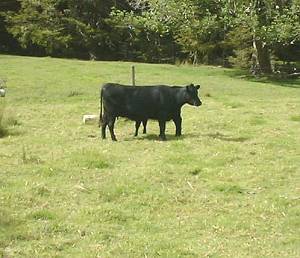 As I walked down around the last corner near the bottom of the paddock, I found them, standing where I'd walked ten minutes previously.  Goodness knows where they'd been - probably just up in the gorse and bush on the hill.  There was no way they were going to go up the hill, so I took them around to the bottom gate on the other side of the hill. 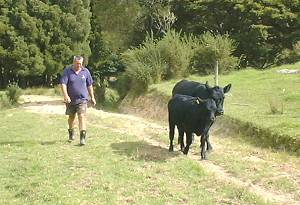 They weren't terribly cooperative, so I waited until Stephan turned up to give me a hand to persuade them in the right direction.

Half of our fertilizer has been spread.  Now what we need is a nice, small amount of rain, just to wash it off the grass and down onto the soil.  We do not need a flood!

All day long I've been hearing the strident calls of Long Tailed Cuckoos.  They seem to have been around for a long time this year, although that may not be so - perhaps there are more of them, or perhaps I've just become more aware of their calls this year than before.

There is also a great deal of constant noise from these creatures: cicadas, in all the trees, so the noise in some places is positively deafening!

#356, the stuck steer, looked terrible this morning and his wound smelt worse than usual, so I called the vet and asked him to come out and have a look.  The steer's temperature is up, so he's had an antibiotic injection, and I've had some more advice on how to care for the open wound.  Twice a day now, I will walk the steer into the yards and wash the wound out with copious quantities of water, before applying the "yellow lotion".  I'll also keep an eye on his temperature to check on the need for a further injection in a couple of days (the drug is a long-acting one, so only needs to be administered every three days, if a repeat is deemed necessary).  All the dead tissue within the wound needs to be expelled before it can really begin to heal properly, which looks like it could take a wee while!

I've also begun a combination homoeopathic treatment, following advice from Homoeopathic Farm Support, which must be administered over a few days and which the steer is not enjoying - it's no big deal, but he just doesn't like me spraying stuff up his nostrils!

Stephan has been cast in another play!  This time another New Zealand play, called "Wednesday to Come" by Renée (whom I have actually met in some distant past time), set during the depression in the 1930s.  It will be staged sometime in May.

I've been toying with the idea of getting serious about the website, in terms of actually purchasing server space somewhere where it can all reside in one place, without endlessly having to shuffle things around to make space for new pages!  First, to choose a domain name ...

Out the back, Stephan has been valiantly wielding the scrub-bar, and cutting down great areas of rampantly growing gorse!  Jill and Bruce came over from Kohukohu this morning and when they arrived, we walked out to have a look ... 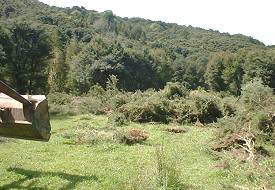 He'd already finished cutting it all down and was now pushing it into piles with the tractor.  At some stage we'll probably burn it and maybe he'll first salvage some for wood-turning, since it's apparently a nice wood to turn!

Below is the neighbouring area he's intending to clear.  It's not quite as covered, but won't take long to become so if we don't clear it. 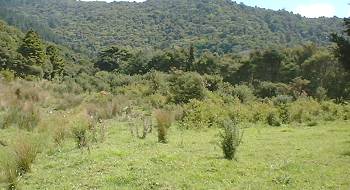 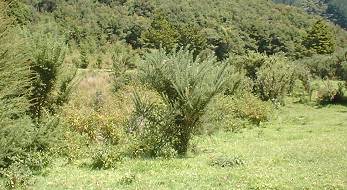